Dortmund rescue a point after Nils Petersen's astonishing goal for Freiburg while Bayern survive an early scare before thrashing Hoffenheim. HSV draw in Leipzig, Schalke win in Stuttgart and Cologne draw with Augsburg. 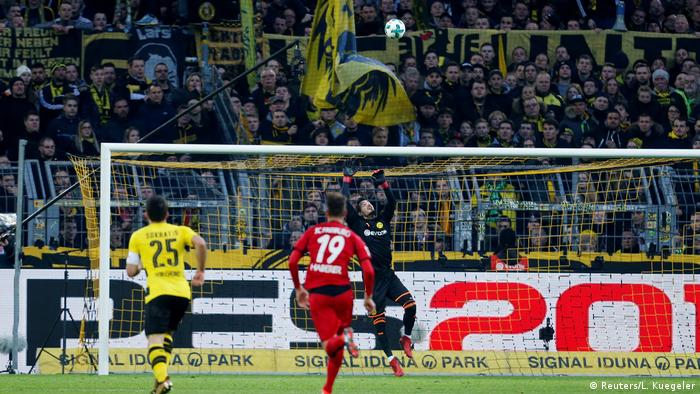 Another disappointing afternoon for Borussia Dortmund who left it late to rescue a point at home to Freiburg. The Black & Yellows looked pedestrian and devoid of ideas for long periods but it will surely be Freiburg captain Nils Petersen who steals the headlines after his 40-yard wonder-goal (see picture above). While Peter Stöger has steadied the ship somewhat at the Westfalenstadion since taking over from Peter Bosz, his side have yet to produce a truly impressive performance and now find themselves four points behind second-place rivals Schalke, who producing a commanding performance in a 2-0 win away at Stuttgart.

Bayern Munich survived an early scare after they found themselves two goals down at home to Hoffenheim. But the champions hit back in ruthless style to ultimately run out 5-2 winners, Sandro Wagner with the last of the goals against his former club.

Down at the bottom, Bernd Hollerbach will happily take a point from his first game in charge of Hamburg away at RasenBallsport Leipzig, but Cologne will feel they have failed to capitalize after settling for a draw at home to Augsburg. The relegation battle is well and truly underway.

-- 90+2' GOAL! Borussia Dortmund 2-2 Freiburg (Toljan) - The full-back fires home through a melee of players to rescue a point for Dortmund!

-- 90+1' A huge chance for Cologne but Guirassy shoots wide! Then, Sörensen just can't connect with a late free-kick into the box, and the Billy Goats look like they'll have to settle for a point.

-- 89' GOAL! Bayern Munich 5-2 Hoffenheim (Wagner) - Wagner scores his first goal for Bayern - and it comes against his former club.

-- 87' Dortmund are passing the ball back and forth but there's a clear lack of ideas and no-one to take responsibility. Freiburg can defend long balls into the box all day long.

-- 85' Dortmund, who have only won one of their last six home games, are running out of time against Freiburg, who are happy to sit and defend their lead in a 5-4-1 formation. With Schalke winning, this would leave BVB four points behind the Royal Blues and outside of the European places.

- 79' Close! Cologne almost restore their lead immediately as Milos Jojic looks to reproduce his first half free-kick, but Marwin Hitz is equal to that one.

-- 77' GOAL! Cologne 1-1 Augsburg (Caiuby) - The Brazilian climbs above Sörensen at the back post to head home from Philipp Max's corner and the visitors are level!

-- 73' Little to report from Leipzig either where Timo Werner has received treatment for a bloody nose. The brief period down to ten men seemed to take the Red Bull franchise out their stride but HSV haven't shown enough to capitalize.

-- 64' GOAL! Bayern Munich 3-2 Hoffenheim (Coman) - Robert Lewandowski finds Kingsley Coman in acres of space on the left. The Frenchman strolls into the box, cuts onto his right and shoots low past Baumann. The comeback is complete and Bayern lead.

-- 60' Borussia Dortmund are enjoying a lot of possession (69%) but they're not doing much with it and Freiburg are looking disciplined and comfortable. BVB's best chance since the break fell to Kagawa who, having been played in by Sancho, shot just wide. This really isn't good enough from Peter Stöger's side ... 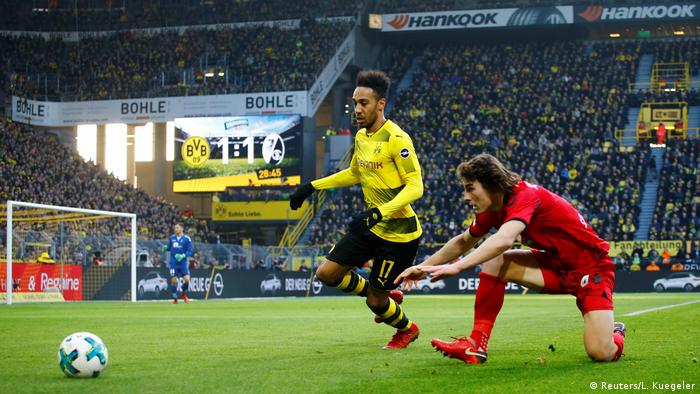 Pierre-Emerick Aubameyang isn't the flavor of the month in Dortmund. Would a goal change that?

-- 58' A couple of chances for each team in Munich. First, Uth wastes a decent opportunity for Hoffenheim before Hübner does well to block Robben's effort after the Dutchman had cut inside in trademark fashion.

-- 56' Leon Goretzka is subsituted for Stambouli with a suspected thigh problem. There haven't been any audible boos from the Schalke fans in the away end today for Goretzka ... they're too busy singing about "sleeping under bridges" ...

-- 54' Marcel Sabitzer rounds Mathenia and could restore RB's lead but he's forced too wide. Mathenia recovers to tip his cross over for a corner. Still 1-1 in Leipzig.

-- 48' Almost calamity for Ausgburg! Clemens' cross is flicked on by Khedira before Danso tries to clear but can only volley towards his own goal! Luckily for him, Marwin Hitz reacts like lightning! Phew!

-- SECOND HALF --
We're back underway across the Bundesrepublik

Goals galore in the Bundesliga this afternoon! It looked like a shock was on the cards when Hoffenheim took a two-goal lead but Bayern, as Bayern tend to do, quickly leveled up. There were whistles at half-time in Dortmund where BVB have failed to build on an early Shinji Kagawa volley, while Hamburg reacted well to an early set-back in the Red Bull Arena. Stuttgart's free-fall seems to be continuing as they trail 0-2 to Schalke, but the momentum is all with Cologne at the moment - the seemingly doomed Billy Goats lead again at the break.

-- 45' Just over! Robert Lewandowski almost gives Bayern the lead just before the break but the Pole's sails over.

-- 40' GOAL! Cologne 1-0 Augsburg (Jojic) - A dream free-kick from Milos Jojic! The Serbian playmaker curls a beautiful effort into the top corner of the Marwin Hitz's net. The Augsburg keeper got a hand to it but couldn't keep it out and Cologne lead again! 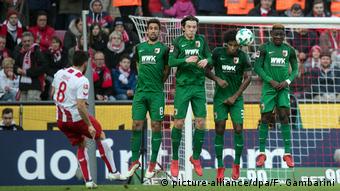 Pick that out! Milos Jojic curls home his free-kick to give Cologne the lead

-- 38' A dangerous cross from Christian Pulisic but it goes just behind Kagawa and Aubameyang.

-- 38' Close for Bayern! David Alaba curls an effort round the post from just outside the box. Alaba has had as many shots on goal as the entire Hoffenheim XI ... Elsewhere in southern Germany, Stuttgart haven't had a single shot ...

-- 32' Pierre-Emerick Aubameyang's header goes just over the bar as Dortmund look to restore their lead. The crowd are demanding more intensity from their side.

-- 29' What a chance for Simon Terodde! He's scored three goals in his first two games for Cologne and that really should have been four. One-on-one with Marwin Hitz but the Augsburg keeper tips the shot around the post. 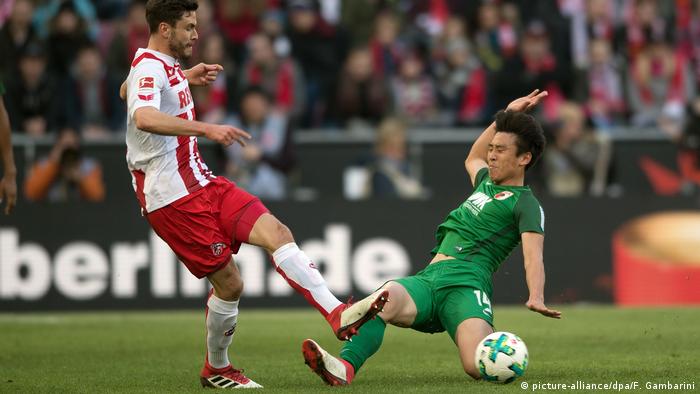 Cologne's Jonas Hector in action against Ja-Cheol Koo of Augsburg

-- 25' GOAL! Bayern Munich 2-2 Hoffenheim (Boateng) - And the champions are level in no time! Jerome Boateng heads home completely unmarked in the six yard box from Robben's corner. Perhaps Hoffenheim shouldn't have angered them ...

-- 20' GOAL! Bayern Munich 1-2 Hoffenheim (Lewandowski) - Robert Lewandowski cheekily diverts Kimmich's shot away from the diving Baumann and the champions are back in it. 13 goals in 14 games against Oliver Baumann now for the Pole!

-- 21' GOAL! Borussia Dortmund 1-1 Freiburg (Petersen) - The visitors are level! Captain Nils Petersen converts at the near post from Janik Haberer's cut-back. Christian Streich's team have come from behind again. 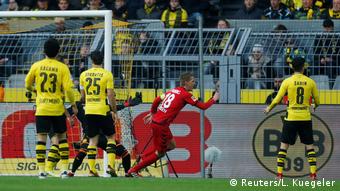 -- Eight goals in the opening 20 minutes across the Bundesliga this afternoon - it's all happening! Cologne vs Augsburg is the only fixture which remains goalless ...

-- 19' GOAL! Stuttgart 0-2 Schalke (Harit pen) - Armine Harit doubles Schalke's lead from the spot after a foul on Leon Goretzka. It's a long way back for Stuttgart now ...

-- 14' GOAL! Stuttgart 0-1 Schalke (Naldo) - Defender Naldo heads home his fifth goal of the season already and, once again, it's come from a set-piece.

-- 11' GOAL! Bayern Munich 0-2 Hoffenheim (Gnabry) - Serge Gnabry drills home a powerful effort from the edge of the box against his parent club and the visitors lead 2-0!

-- 11' Cologne have started well against Augsburg, Milos Jojic firing over the bar for the hosts, who know that, with HSV losing, they have the chance to go level on points with the northerners.

-- 9' GOAL! Borussia Dortmund 1-0 Freiburg (Kagawa) - The Japanese midfielder volleys home from inside the area after the ball ping-pongs around the Freiburg box.

-- 9' GOAL! RB Leipzig 1-0 Hamburg (Bruma) - Marcel Sabitzer does well on the right hand side of the box and crosses to the back post where Bruma nods home past Mathenia. An early set-back for Bernd Hollerbach on his HSV coaching debut.

-- 3' GOAL! Bayern Munich 0-1 Hoffenheim (Uth) - Gnabry steps up himself but Sven Ulreich saves! Luckily for Hoffenheim, Mark Uth is on hand to tap home the rebound and Hoffenheim have a shock early lead! 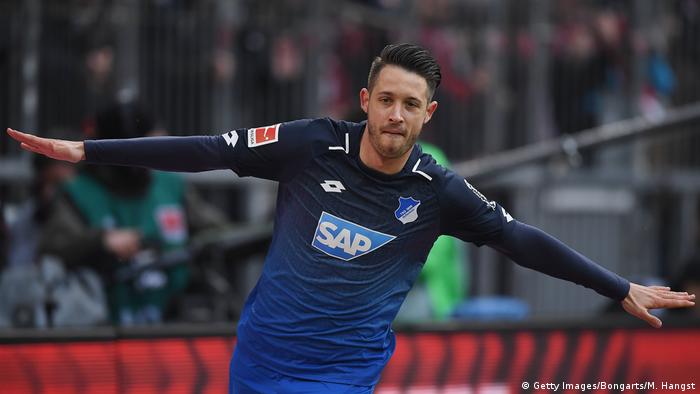 Mark Uth celebrates his opener for Hoffenheim, but the joy didn't last

-- 2' PENALTY IN MUNICH! Serge Gnabry is brought down by Joshua Kimmich and the referee points to the spot.

-- 3' Borussia Dortmund have also forced an early corner kick after a dangerous cross from Christian Pulisic. English teenage Jadon Sancho makes his second consecutive start for the Black and Yellows.

-- 2' An early corner for RB Leipzig is headed clear befoire Diego Demme fires over the bar.

-- Long time, no see! Sandro Wagner greets his former coach Julian Nagelsmann, but the striker starts on the bench for his new club, Bayern Munich.

-- Borussia Dortmund's supporters have made their opinion of Pierre-Emerick Aubameyang clear ...

1.FC Köln vs Augsburg - Is this the start of the great escape? Having endured the worst first half of a season in Bundesliga history, Cologne made it three wins in a row with their 2-0 away win over fellow strugglers Hamburg last week. New signing Simon Terodde has become an instant hero after scoring three times in his first two games and he leads the line in an unchanged line-up against Augsburg, who themselves boast a potent attack with Michael Gregoritsch, Alfred Finnbogason and Caiuby all starting.

VfB Stuttgart vs Schalke - After an impressive start to the season, Domenico Tedesco's Schalke side have now won only one of their last seven matches and have only one point since Christmas. But the Royal Blues will take heart from their recent record against Stuttgart, having won four of their last five meetings with the Swabians - who are in freefall after losing six of their last seven! Leon Goretzka retains his place in the starting XI despite being roundly booed by Schalke fans last week after the announcement of his move to Bayern at the end of the season.

Bayern Munich vs Hoffenheim - There are a host of sub-plots in Munich this afternoon as Sebastian Rudy and Niklas Süle start for Bayern against their former club Hoffenheim, while Sandro Wagner starts on the bench alongside Thomas Müller, James Rodriguez and Franck Ribery. The visitors are of course coached by Julian Nagelsmann, who has featured high on Uli Hoeness' list of potential successors should Jupp Heynckes go back into retirement at the end of the season as expected. Serge Gnabry, on loan at Hoffenheim, starts up front against his parent club.

Borussia Dortmund vs Freiburg - Despite recent indiscretions, Pierre-Emerick Aubameyang starts up front for Borussia Dortmund as they welcome Freiburg to the Westfalenstadion. Julian Weigl and Mario Götze drop to the bench as coach Peter Stöger opts for experience in midfield with Nuri Sahin, Shinji Kagawa and Gonzalo Castro. Freiburg, fresh from last week's comeback against RasenBallsport Leipzig, will be looking for an another upset.

- Read more: Is Arsenal the right club for Pierre-Emerick Aubameyang?

RB Leipzig vs Hamburg - Still hurting from that defeat to Freiburg, RB Leipzig look to bounce back against struggling Hamburg - who themselves will be aiming to re-start their season under new coach Bernd Hollerbach. Ralph Hasenhüttl admits his team's preparations have been interrupted by HSV's change of coach, but says he knows Hollerbach well. "We might not be brothers in terms of our philosophies but I think he's a great guy," he said.