Kai Havertz may have lost his crown as the youngest man to play for Bayer Leverkusen, but his title as the club's leader remains very much intact. He scored twice from an unfamiliar role as Leverkusen beat Bremen 4-1. 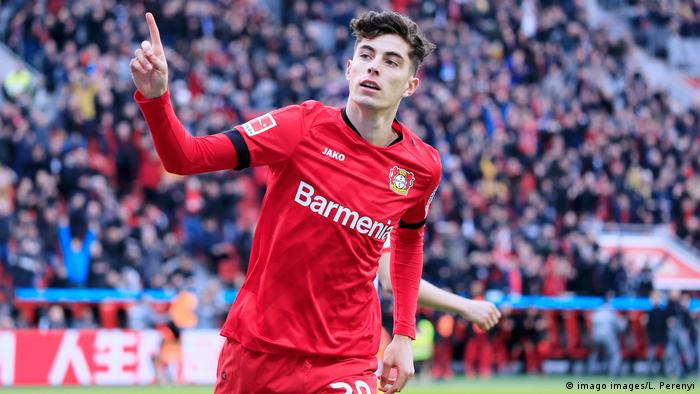 When the Bayer Leverkusen teamsheet was announced an hour before kickoff at the Weserstadion in Bremen on Monday night, the eye was drawn to a new name. Fifteen days after his seventeenth birthday, Florian Wirtz was to become the youngest man ever to play for visitors Bayer Leverkusen.

The presence of midfielder Kai Havertz in that same lineup surprised precisely no-one, though the fact that he was playing up front on his own wasn't quite so predictable, despite the injury-enforced absence of regular striker Kevin Volland and a couple of runouts at the sharp end before football ground to a halt in March.

Havertz, still just 20, has long been regarded as one of the world's best prospects since his own debut at 17 in 2016. It's often easy to see why. He's got rare vision, passes well, is a sharp finisher and moves with a rangy elegance. What's not always been quite so obvious, depsite his 1.89 meter frame, is his aerial prowess or goal-poaching instincts.

But those were the attributes that came to the fore on Monday as two headed goals from their captain put Leverkusen on their way to a straightforward win against a side who look increasingly doomed. The absence of quality and match sharpness was almost as noticeable as the absence of noise in the opening half an hour until Moussa Diaby burst in to life down the right hand side. Havertz reacted quicker than anyone in green, peeling off to the backpost and rising highest to nod in the French winger's dinked cross. It was a textbook piece of number 9 play.

Leverkusen then gave a glimpse of their achilles' heel when they failed to pick up the set piece run of Theodor Gebre Selassie, allowing the veteran fullback to flick home. The lead had lasted just two minutes, but parity lasted little longer: three minutes later, Havertz was allowed the freedom of the Bremen box to head home from Kerem Demirbay's corner.

While the Leverkusen skipper was in the right place at the right time, it was dreadful defending from Bremen, who, following Mitchell Weiser's third just after the hour mark, have conceded 14 headed goals this term — easily the league's worst record. Defeat leaves the Green-and-Whites staring a first relegation in 40 years in the face and, despite the talent in the squad, the future looks bleak.

The same can't be said of their visitors, who had found their feet before the enforced hiatus and got back up and running on Monday. As Bremen tried to attack their way out of trouble, Havertz stepped back in to midfield, playing in Diaby to set up Weiser's goal and generally dictating play.

While there's little doubt Havertz is the jewel in the crown of Peter Bosz' Champions League challengers, this is a Leverkusen side bursting with young talent.

Diaby (20) combines electric pace with increasingly smart decision-making, January signing Edmond Tapsoba (21) has been a revelation at center back, Leon Bailey, still 22, has started to recapture his best form, while Nadiem Amiri (23) has shown enough midfield talent to be capped by Germany. With experienced Bundesliga heads like Sven Bender, Jonathan Tah, Lukas Hradecky and Demirbay, Bosz will surely be confident his team can push Borussia Mönchengladbach all the way for the fourth Champions League spot. With a German Cup final against Saabrücken and still alive in the Europa League, they could even shed the Neverkusen tag they picked up after a string of near misses in the late 90s and early 2000s.

Havertz had a few near misses of his own in the second half as he came close to registering a first career hat trick before Demirbay dinked in an impudent fourth. Havertz will find few more obliging opponents than Bremen, but it's surely just a matter of time before he registers a treble.

The question remains as to whether that comes in a Leverkusen shirt. Havertz has long been linked with Bayern Munich while plenty of clubs abroad have also shown an interest.

But, even before the coronavirus pandemic threw the world in to chaos, there were noises that Havertz might hang around a little longer. There'll certainly be plenty of Leverkusen fans who'd love to see him play live for their team again.

With Germany handling the coronavirus situation well, the Bundesliga was allowed to return this weekend, attracting interest from across the globe. But closer to home, fundamental questions are still being asked. (17.05.2020)

The Bundesliga looked to show the world what live sport could be like during the coronavirus pandemic. While it had its moments, this new football just didn't feel right, writes DW's Jonathan Harding. (16.05.2020)