RB Leipzig are among several Bundesliga clubs submitting post-COVID hygiene concepts, suggesting the return of fans to stadiums in Germany might not be far away. But the risks are real, a government official tells DW. 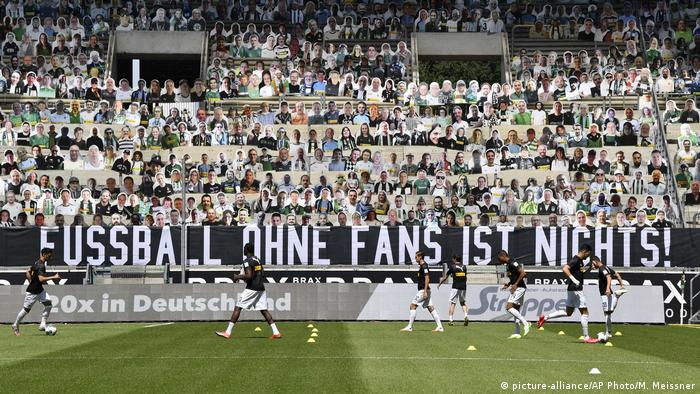 The banner reads 'Football is nothing without the fans'

With the state of Saxony having reportedly agreed in principle to RB Leipzig's plan to allow fans to return to the Red Bull Arena in limited numbers, Sky Sports' fake fan noise may be replaced by the real thing as soon as September.

Saxony's Health Minister Petra Köpping (SPD) has expressed confidence that the return of events with more than 1,000 spectators could be possible again from September if hygiene rules are closely adhered to, but that fans should "avoid shouting, singing and screaming."

While that doesn't sound like fun for most fans, the concept would at least allow RB Leipzig to welcome up to 20,000 fans to the Red Bull Arena, and that can only be a step in the right direction.

However, Germany's federal system complicates any possible blanket decision to bring fans back. In North Rhine-Westphalia (NRW), the most populous of Germany's 16 states and home to six Bundesliga clubs, the director of sport at Schalke has been very clear that only an all-or-nothing solution will suffice.

"It would simply be incomprehensible to many people that spectators are admitted at one Bundesliga location and not at another," Jochen Schneider said last week. "That's why I hope that a uniform solution will be feasible."

Read more: Bayern Munich's Karl-Heinz Rummenigge: 'Football does not belong to the fans'

But that won't be so easy. Despite skepticism among some fans, the DFL will motor ahead with its plans to start the new season on September 18 and has already distributed guidelines to help clubs develop "site-specific" concepts. Half-full stadiums are better than empty ones, but there is still a lot of work ahead to make this a reality – and government officials remain concerned.

"Purely from an epidemiological point of view, events with a large number of people singing loudly and cheering together in a confined space poses a great risk for the transmission of pathogens," a spokesperson from the Ministry for Work, Health and Social Affairs for NRW told DW.

"The decisive factors for safety are the number of new SARS-CoV-2 cases, the hygiene concept, and how well visitors deal with it."

The spokesperson went on to explain that, in their view, the testing of fans on site is a non-starter and that clubs will have to find another solution.

Read more: Coronavirus and sports: What happened in June 2020 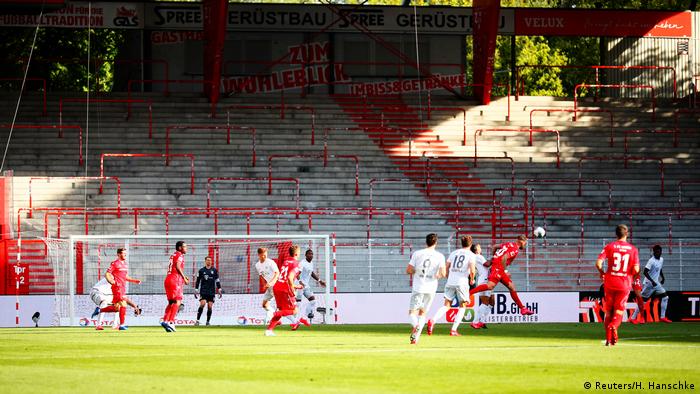 The idea of providing testing capacity for all fans was first raised by Union Berlin, whose 22,000 capacity Stadion an der Alten Försterei includes standing terraces for over 18,000 fans. Union therefore aren't in a position to allocate individual seats to fans and guarantee social distancing, so the need to find a solution to allow their supporters back into the stadium is particularly pressing, not only for the club's finances but also because of its identity.

The club was unwilling to comment as their plans are yet to be finalized, but they have been accused in some quarters of the German media of pushing the "agenda" of fans returning because it plays to the club's "anti-modern football" image that they have cultivated over the years.

This view may seem a little cynical given that most Bundesliga clubs are reliant on ticket revenue to one degree or another, and Union aren't the only ones exploring ways to bring the fans back.

Schalke, for example, told DW that while they are not in favor of fans returning at any cost, they are exploring different ways of ensuring that fans can come back in a way that guarantees their health and safety. That, they say, is the club's primary concern.

However, even if a solution to allow stadiums to be half-full is agreed, resistance is also likely to come from a surprising source: the supporters themselves. The "ProFans" alliance, one of Germany's oldest nationwide fan groups, have already cautioned that the likely use of personalized tickets to facilitate contact tracing could lead to "surveillance and control" and the abuse of personal data.

Whether on health grounds or otherwise, the DFL is likely to meet plenty of resistance on its quest to fill stadiums by September.