Bayern Munich's flawless start to the season is over, after a late Felix Götze goal won Augsburg a point at the Allianz Arena. The home side were off-color and will rue several missed opportunities. 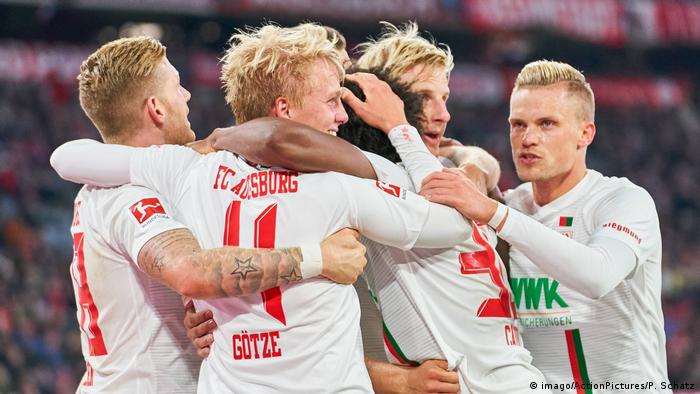 Perhaps they aren't quite so perfect after all. A late goal from a familiar family punished a sloppy performance from Niko Kovac's side, as Mario Götze's brother Felix chested in a late equalizer on Tuesday night.

Kovac rested David Alaba and Robert Lewandowski for this one and the omission of the latter may well have cost Bayern, with his replacement Sandro Wagner spurning two good chances just before halftime.

Alaba was replaced at the interval by Leon Goretzka, who looked thoroughly uncertain in his left-back role and was removed at the break as the hosts struggled to find much fluency. When they did, for ten minutes either side of the interval, Augsburg were powerless to stop them and fell behind when Arjen Robben lashed in after some strong work from Serge Gnabry.

But the champions took their foot off the gas and were punished with four minutes remaining. Manuel Neuer spilt a back post corner after getting in to a tangle with Niklas Süle. The ball fell to Jeffrey Gouweleeuw at the back post and he lashed it across before Götze turned it in with his chest.

In the midst of Oktoberfest, at least one Bavarian team might allow themselves a celebratory beer.

FULL TIME: Bayern throw it in to the box once more and that's it. Augsburg are the first team to avoid defeat to Bayern Munich this season.

90+2 - Close! Müller gets in a pocket of space on the edge of the box. Thiago and Robben await but the cross is just too high for the Spanish midfielder, who heads over.

90' - Aside from ten minutes either side of the break, Bayern have been a couple of notches below their best tonight. They have three minutes to take all the points.

88' - Neuer will have to take the blame for this one. He came for a corner and spilt it after getting in to a tangle with Hummels. It dropped to Gouweleeuw who drilled it back across goal for Götze to chest in. The 100% record is under severe threat.

84 - Ribery has the ball in the Augsburg net but it's ruled out. He'd exchanged passes with Müller, whose big toe was offside, before putting it in the back of the net.

82' - Augsburg surely have to go for it now. They've stayed in it but now it's time to hurl caution to the Munich wind. Framberger tires, capitalizing on a Bayern error to find space on the right but his cross is poor.

78' - Hinteregger wallops it. It's got all the power but none of the direction. The Austrian protests furiously that it deflected in a vain attempt to spare his blushes.

77' - Thiago's first involvement is a sloppy ball, which is intercepted. The Spaniard takes a booking trying to recover the situation.

75' - It's a decent hit and bounces just before Luthe, who pushes it away. Kovac, in a bit of a swipe at Wagner, removes the striker for Thiago. Wagner missed two excellent chances before the break.

73' - Alaba buys a free kick about 30 yards out and he fancies it himself.

68' - Max stands over an Augsburg corner now. He aims for the back post and it's cleared as far as the edge of the penalty area. Baier then hits a speculative effort, which Hinteregger tries to deflect towards goal. But he can't get enough on it.

64' - Robben swings in a corner from the right but it comes to nothing. Augsburg starting to get pinned back a touch.

59' - Bayern make their second change, Ribery comes on for Gnabry.

55' - Augsburg, to their credit, haven't thrown in the towel and Gregoritsch flashes a header just over the bar.

50' - Sanches again prooduces a devastating burst right through the center of the pitch and draws yet another smart save from Luthe. This one could be done and dusted before the hour mark.

48' - Robben gets on the scoresheet but this is all Serge Gnabry. The former Bremen man latches on to a high ball, take it under his spell and drives at the defnse at full pace, Luthe comes out and Gnabry shifts it to Robben. There are two defenders on the line and it's on his right, so Robben drives inside and lashes it in with his trusty left peg.

46' - We're off again!  Bayern replace makeshift left back Goretzka, who'd been booked, with actual left back Alaba, who hasn't. That one wasn't an overwhelming tactical success.

HALF TIME: After a sluggish start, Bayern really improved towards the end of the half and both Wagner and Sanches should have broken the deadlock. Augsburg will be delighted to go in level but haven't offered much going forward since the very early stages. 2-0 Bayern anyone?

44' - Excellent save from Luthe. Martinez gallops through the midfield and drops it off to Gnabry but the former Bochum man sticks out a left hand to palm a stinging effort from 20 yards around the post. Great stop. Sanches is in acres of space from the corner and brings it down but balloons it way over the bar.

41' - Two big misses from Wagner. First of all he heads another excellent Kimmich cross straight at the keeper then he's on to a woeful backpass but again hits Luthe. He should tuck away at least one of those. Augsburg desperately want half time now.

39' - Neuer gets away with a poor clearance. He was out of his goal for a moment but the ball didn't fall kindly for Augsburg and the Germany keeper was able to recover.

37' - Sanches again does well to hold off a challenge and roll the ball to Robben. The Dutchman returns the favor but the ball is just behind him and he blasts over. A bit better from Bayern as we near half time.

35' - Chances for Bayern! The first is probably the closest they've come by design. Kimmich gallops down the right and stands one up for Wagner, but the big striker can't get over the header. Moments later Sanches has a pop from distance that's easily saved Luthe.

29' - This is pretty low quality stuff. Sanches goes in the book for Bayern and Augsburg try unsuccessfully to wokr a quick free kick.

25' - Robben and Gnabry exchange passes in the middle of the park but both passes are behind the man. The home side have just been a little off their game so far.

22' - Max swings in a corner which Bayern clear before Robben blocks the follow up. Augsburg are doing well here. I mean, Bayern will probably score in a minute but it's a bit scrappy right now, which is about all the visitors can hope for.

21' - We have sound! The atmosphere returns following the 20 minutes boycott.

19' - Rani Khedira does go in to the book for a pretty cynical trip on Gnabry as he was making his merry way upfield.

17' - Gregoritsch is pretty late on Martinez but manages to escape a booking.

12' - Brilliant stuff from Sanches, who is first to a loose ball and then drives past two challenges before hitting a slightly wayward shot on the run. The Portuguese is so powerful with the ball at his feet and his confidence seems to be up after that goal in Benfica. More on that one here.

10' - The first corner of the match goes to Bayern, who are starting to turn the screw. But Kimmich overhits it and Bayern can't make much of the second ball either.

7' - It's deathly quiet at the Allianz, with fans across Germany protesting against kick off times that they believe are unfair with a 20 minute atmosphere boycott. On the pitch, Caiuby finds more space than he should and stings Neuer's palms. Then Bayern go right up the other end and Wagner's cross/shot takes a deflection off an Augsburg leg and clips the far post.

3' - Pretty incredible stat from the Sky team, who say there are more international caps on Bayern 's bench than in the rest of the Bundesliga combined.

1' - And we're off! It looks, rather bizarrely, like it's actually Leon Goretzka at left back.

20:27 - With David Alaba Bayern's only fit left back, it makes sense for Kovac to rest him for this game. What's less clear is who will replace him. Some are saying Serge Gnabry will play there, others are suggesting it's three at the back. We'll soon find out.

20:22 - That game in Bremen has just finished. Werder were impressive, with Martin Harnik and Max Kruse among the goals. Hertha's defeat means Bayern, Dortmund and Bremen are the only sides to have avoided defeat.

20:15 - Hello, and welcome to the Englische Woche, as they call a midweek round of league fixtures in Germany. With Werder Bremen on the verge of beating Hertha Berlin as we speak, Bayern Munich can go four points clear with a win tonight and will have at least that margin by the end of matchday 5.

That's a fairly ominous sign for anyone but fans of the champions, as is the fact that they can afford to rest a few star names ahead of three games in seven days. Robert Lewandowski and David Alaba drop to the bench and are joined by the likes of James Rodriguez, Jerome Boateng, Franck Ribery and Thiago. Good luck Augsburg.

The visitors drop keeper Fabian Giefer after his clanger at the weekend and his replacement Andreas Luthe will expect a busy night on his first league appearance this term. Elsewhere, Schalke seek their first point in Freiburg while Hannover host Hoffenheim. We'll keep you up to date on those too.