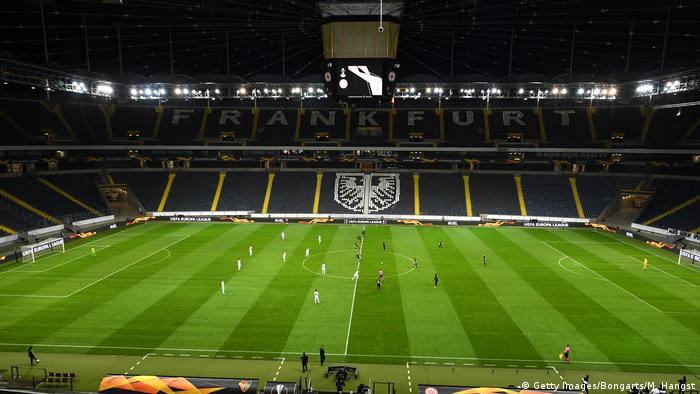 In statements posted on both companies websites on Wednesday, Deutsche Bank and Eintracht Frankfurt announced that the Frankfurt-based lender was set to become the Bundesliga club's new main sponsor.

With Commerzbank's naming rights contract for Eintracht's Waldstadion set to run out at the end of the season, the bank's yellow logo is to be removed from the stadium roof this summer and replaced with blue lettering reading: "Deutsche Bank Park."

Read more: Coronavirus: How football stars and clubs are helping in the fight

In its statement, Eintracht Frankfurt thanked Commerzbank for is support since becoming the official name sponsor of the football stadium in 2005.

Neither Deutsche nor Eintracht has disclosed any monetary figures, but according to the mass-circulation daily Bild, the bank is to pay around €5.5 million ($6 million) annually for the naming rights to the Waldstadion.  In recent years, Commerzbank had been playing about €3.5 million, according to the Bild report.

The Deutsche statements said the partnership, which is to run for at least seven years, is to be about more than just sports sponsorship. The plan is to develop new digital business models and products "that go far beyond the current fan experience in the stadium."

German football appears determined to finish the current season after all 36 clubs in the top two divisions agreed to suspend play until at least April 30. DW looks at why they can’t afford to entertain any other option. (31.03.2020)

Bayern Munich coach Hansi Flick believes the only way to finish the football season is behind closed doors in "ghost games." Joshua Kimmich and Leon Goretzka have also revealed how much they are missing the sport. (30.03.2020)