Teenage sensation Jamal Musiala scored twice as Bayern Munich beat Wolfsburg to go seven points clear at the top of the Bundesliga. Elsewhere, Borussia Dortmund have a glimmer of hope after a big win on Sunday. 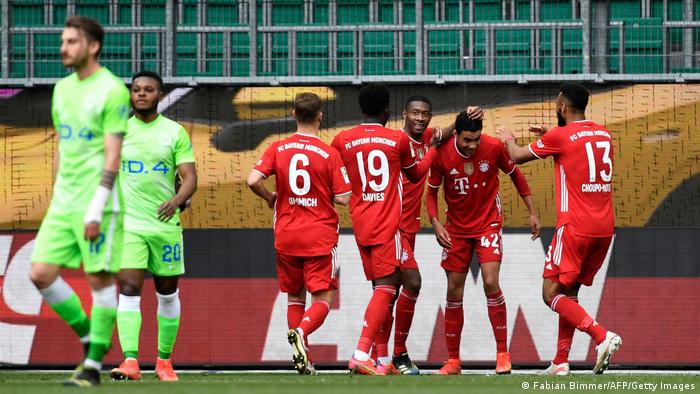 Yes - but only just. Hansi Flick's team eventually ran out 3-2 winners in an entertaining game away at third-place Wolfsburg.

Jamal Musiala was the man-of-the-match, the German international scoring his fifth and sixth goals of the season and generally linking up well with Alphonso Davies to provide a constant threat down the left.

After scoring in both legs of Bayern's Champions League semifinal defeat to Paris Saint-Germain, Eric Maxim Choup-Moting was also on target again in Robert Lewandowski's absence.

Wolfsburg have been one of the Bundesliga's surprise packages this season, quietly establishing themselves in third. As coach Oliver Glasner said pre-match: "It's not a fluke." And his team demonstrated why against Bayern, keeping themselves in the game thanks to goals from Wout Weghorst (the Dutchman's 19th of the season) and Maximilian Philipp.

If it wasn't for two errors from goalkeeper Koen Casteels for Bayern's first two goals, the Wolves may have got more out of this game. As it was though, Bayern capitalized on RB Leipzig's goalless draw against Hoffenheim on Friday night to go seven points clear with just six games to play.

They did, and pretty comfortably. Erling Haaland returned to the scoring trail with two goals, one of which came from the penalty spot, after Gio Reyna equalized Milot Rashica's early opener. A late Mats Hummels' effort secured a 4-1 win that leaves the door open for BVB's Champions League hopes after...

... Champions League contenders Eintracht Frankfurt were hammered 4-0 away at Borussia Mönchengladbach, meaning that Dortmund could close the gap on them to four points. 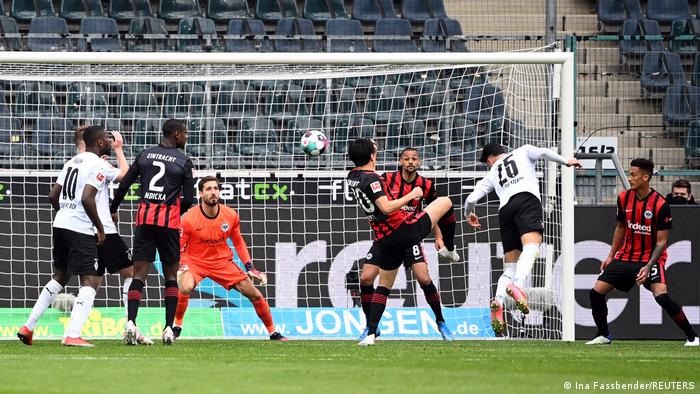 Now, Frankfurt losing away to Gladbach wouldn't normally constitute a huge surprise, but the nature of the Foals' 4-0 victory was certainly surprising.

The game was full of off-the-field intrigue with Frankfurt coach Adi Hütter announcing earlier in the week that he will be joining Gladbach next season as Marco Rose's successor. And since Rose controversially announced his departure in February, Gladbach's form had collapsed, dropping as low as 10th while Hütter's Frankfurt challenged for Champions League.

But goals from Matthias Ginter, Jonas Hofmann, Ramy Bensebaini and Hannes Wolf gave Gladbach a commanding victory which kept their Europa League hopes alive ... and may have planted a seed of doubt in Frankfurt.

There were a few contenders on Saturday as the goals flew in across the country. Away from Wolfsburg and Mönchengladbach, Union Berlin secured an impressive 2-1 win over Stuttgart, while Freiburg thrashed hapless Schalke 4-0.

On the other hand, if you missed Augsburg vs. Bielefeld or RB Leipzig vs. Hoffenheim, don't worry. You didn't miss much. Two terrible games which ended 0-0.

What does the top six in the Bundesliga look like? 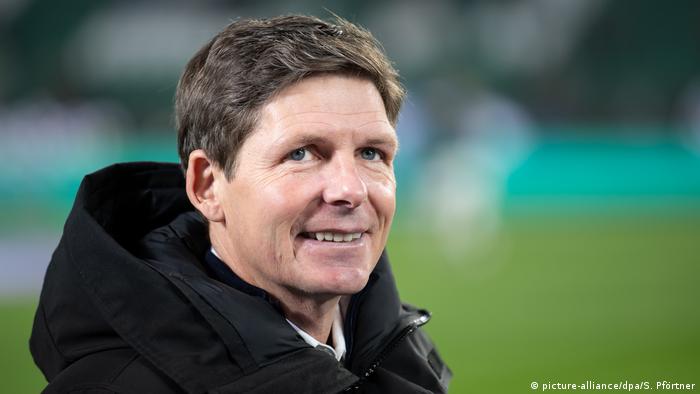 Your round: Oliver Glasner bought Hansi Flick a beer

Similar to Jose Mourinho during his time at Manchester United, Wolfsburg coach Oliver Glasner actually lives in a hotel in the Autostadt - the same hotel that the traveling Bayern Munich squad and staff stayed in on Friday night.

When asked by Sky TV whether he able to pick up any inside information on Bayern's plans, Glasner said no. But he did buy Hansi Flick a beer in the hotel lobby, as a good host should.