Bayern Munich got back to winning ways on Saturday after a wobble in the Bundesliga. The 5-1 victory over Cologne was largely routine for the champions but marked a significant first for Leon Goretzka. 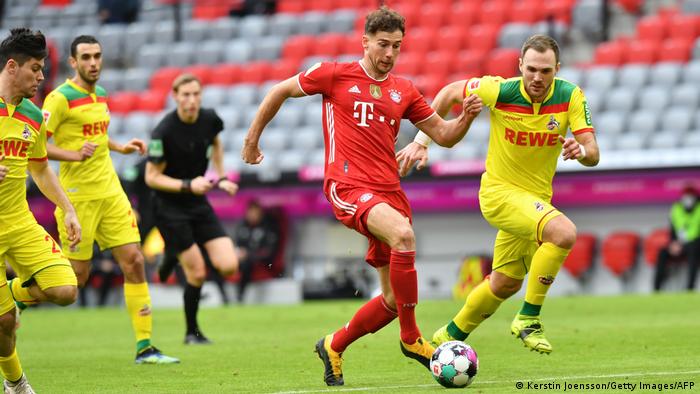 Perhaps unfairly, Leon Goretzka's brawn has drawn more global attention than his brain or his boots since he emerged from football's shutdown last year substantially bulkier than he entered it.

There's no doubt his muscularity is now an asset, but on Saturday, the Germany midfielder offered a reminder that his best qualities weren't honed in the gym.

Goretzka helped Bayern settle their nerves early on after only one point from their last two games. He threw off a number of defenders with subtle feints before picking out Eric Maxim Choupo-Moting at the back post with a perfectly measured dinked ball that left the Cameroonian with no choice but to nod in.

After setting up Jamal Musiala for his goal in Rome on Tuesday, Goretzka's creative juices were clearly flowing and fifteen minutes after his first, he registered a second assist in the same Bundesliga game for the first time in his career. He'd later add a third, for good measure.

If the first was all about awareness and precision, the second was all in the timing. The 26-year-old picked up a pass from Robert Lewandowski in direct sight of goal but knew the insatiable Polish striker would insist upon the return all the same. Rather than take the selfish or rushed route, Goretzka waited until onrushing goalkeeper Timo Horn went to ground before flicking the ball in to Lewandowski's path for a tap in to the empty net.

Last season, that would likely have been game over. But Hansi Flick's men have developed an increasing air of defensive uncertainty that offers hope to any opponent. It reared its head again just after the break as Jerome Boateng and David Alaba left a loose ball to each other, allowing Ellyes Skhiri to dance his way towards Manuel Neuer before dinking the ball over the keeper. Neuer himself was later guilty of a blunder, but Dominick Drexler could only strike the post from a tight angle.

Müller back with a bang

By that point though, the champions had re-established their two-goal cushion after substitute Thomas Müller, returning from a spell out with coronavirus, laid on the Bayern's third and Lewandowski's 28th of the league campaign seconds after replacing Musiala.

Not to be outdone, Goretzka reprised his first assist in the dying embers of the game, picking out substitute Serge Gnabry for his second with a near identical dink to the back post from the corner of the box. The hat trick of assists was complete. "Leon was the player of the day for me," said Hansi Flick after the match.

Even so, there's little doubt Müller has been missed. He's created 32 goals in his last 55 Bundesliga games. Such numbers are perhaps the reason why Goretzka's attacking numbers are a little lower than might be expected for a player with his vision, touch and ability to arrive later in the box. Before Saturday, he had just two goals and three assists in 17 league appearances this season.

Müller, Lewandowski, Kingsley Coman, Serge Gnabry and Leroy Sane are charged with the bulk of the attacking work in the final third while Goretzka's role requires more restraint.

But the former Schalke man appears happy enough playing his role in a supremely talented team. It is a sign of strength, both from him and his club, that he can take his game up a notch when required. That might prove useful for the visit of Borussia Dortmund next Saturday.

Bayern Munich returned to form in sensational fashion, securing a huge win over Lazio in Italy that effectively sealed their spot in the knockout rounds. Jamal Musiala impressed in place of the absent Thomas Müller.