Manuel Neuer had a rare off-day as Borussia Mönchengladbach continued unbeaten against Bayern Munich this season. The Foals are now back in third-place. Pep Guardiola's 60th Bundesliga match as Bayern head coach ended in defeat with Borussia Mönchengladbach succumbing the German champions to their first home loss in the league since April 2014.

Lucien Favre and Gladbach bolstered their Champions League ambitions, moving back into third and closing the gap with second-placed Wolfsburg to seven points. The Foals are now unbeaten in their last five matches as a result of the two strikes from Raffael either side of the break.

With Mehdi Benatia suspended, Holger Badstuber returned to the side in one of four changes to Bayern's starting eleven. The good news of the afternoon was the sight of Thiago Alcantara on the bench for the first time since May.

But Bayern's afternoon turned sour on 24 minutes when Arjen Robben was taken off following a challenge from Tony Jantschke. The Dutchman went down under a trip, but the landing caused the 31-year-old to whack his side on the fall. Bayern's top scorer this season left the Allianz Arena soon after with Dr. Müller-Wohlfahrt.

It went bad to worse as Gladbach's first serious foray six minutes later into Bayern territory was like an unexpected sting. Controlling the ball from a throw-in, Jantschke looped a pass into space for Patrick Herrmann. The winger then delivered precisely for Raffael whose half-volley from the edge of the box crossed the line as a result of Manuel Neuer's weak handling. 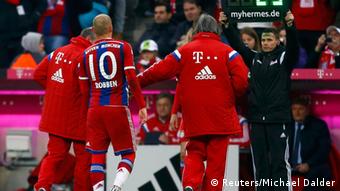 Arjen Robben limps off after 24 minutes at the Allianz Arena

David Alaba carried danger around the pitch wherever he was instructed to roam and the Austrian's deflected shot was the closest Bayern came in an ostensibly abject first half. The 22-year-old wriggled his way past a handful of white shirts before his shot smashed against Jantschke and went over the bar.

Despite not calling any changes at the break, Pep Guardiola tinkered as the second half wore on with Sebastian Rode entering the fray, and Philipp Lahm coming off the bench. Yet with 20 minutes to play, it was Gladbach's Andre Hahn with the next best effort, hitting the post on the counterattack.

But the Foals finally turned their impressive counterattacks into a second goal when Christoph Kramer found Raffael in space and the Brazilian struck low-and-hard past Neuer on 78 minutes.

Bayern's second defeat of the calendar year means their lead at the top is cut to 10 points following the draw between Mainz and Wolfsburg earlier today. With the international break next week, Bayern's next outing to return to winning ways will be at Borussia Dortmund on April 4.