After back to back defeats, Bayern Munich returned to winning ways at home in the snow. Against Freiburg, Bayern did what the other teams vying for the title could not, namely win on a tough day. 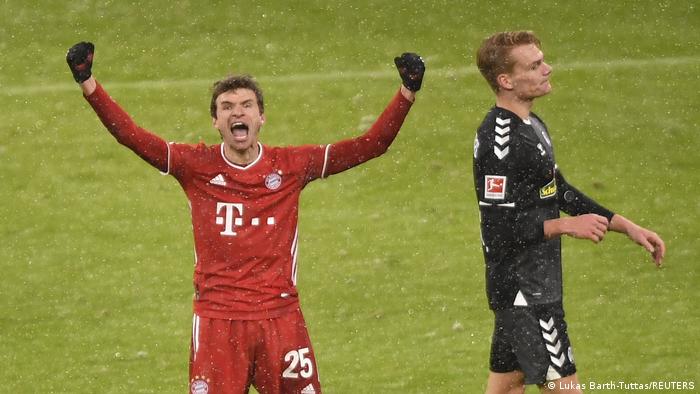 Bayern Munich had to work for their win against Freiburg

On a weekend when the rest of the chasing pack in the Bundesliga missed the chance to put pressure on Bayern Munich, the defending champions showed them how to grind out a win.

Jerome Boateng acknowledged afterwards it was an "Arbeitssieg", the German word for a hard-earned victory.

Bayern had to overcome an early injury to Serge Gnabry, plenty of missed chances, an equalizer and a fine goalkeeping performance from Florian Müller to do it.

Perhaps the key difference was that, unlike Erling Haaland's effort for Dortmund against Mainz, Bayern's early goal stood.

Thomas Müller's first-time pass was brilliant and Robert Lewandowski tucked away his 21st Bundesliga goal of the season, becoming the first ever to score that many this early in a season.

But Bayern took the lead against both Gladbach and Kiel in the last week and lost both, so an early lead no longer necessarily equates to floods of goals.

And so it proved against Freiburg, who recovered from an early injury of their own (to Baptiste Santamaria) to stay in the game. Manuel Gulde made a huge tackle to deflect Lewandowski's close-range effort on to the bar, goalkeeper Müller dove all over the place and the visitors knew they had a chance on the break.

On the hour mark, Streich made a triple substitution, including throwing on his favorite super-sub Nils Petersen. Seconds later, with his first touch, Petersen's diving header at the back post had Freiburg level. 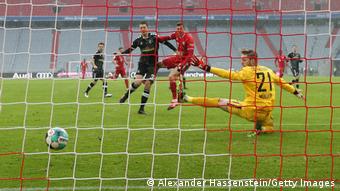 It wasn't a goal on the break, but conceding still felt far too familiar for a Bayern side that used to pride itself on being impenetrable. But the champions have conceded 25 in the Bundesliga this season, making their defense the worst in the top six.

The reason they are top though, was what saved them. Their attack delivered goal 48 of the season, which came after Müller reacted well to a bouncing ball in the box, finishing in classic Müller fashion.

With just a one-goal lead, the threat of an equalizer hung in the air. When the ball landed at Petersen's feet in the box, it looked like Kiel all over again. This time though, Neuer had his crossbar to thank, the snow coming down off the crossbar behind the line, but not the ball.

Petersen later apologized for his miss, before adding: "It [beating Bayern] was possible today, yes." But Bayern jittered their way to victory.

But it was a game they won. And right now, in the midst of a busy schedule, that matters. Just ask the rest of the top four.