It's not too long ago that RB Leipzig looked like Bayern Munich's biggest challengers. Now, ahead of their clash on Wednesday, the two sides are both trying to cling on to Borussia Dortmund's coattails. 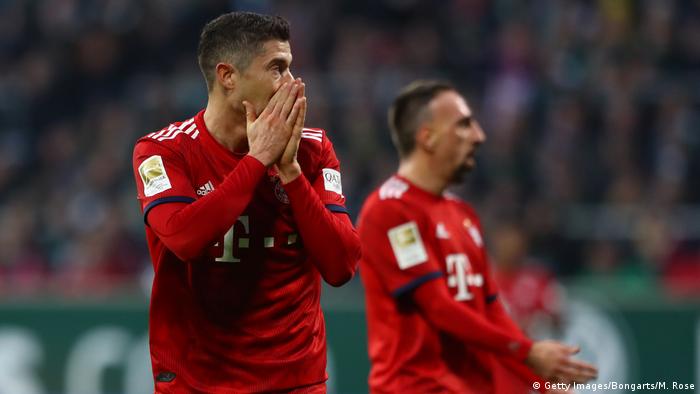 It's almost exactly two years ago that Bayern Munich brushed off the challenge of upstarts RB Leipzig with a 3-0 home win that ensured they went in to the winter break top of the tree once again.

That victory signalled the beginning of the end for the only genuine title challenge the Bavarians had experienced for some time. Until now. Borussia Dortmund secured the Herbstmeisterschaft (Autumn champions) on Saturday, the first time Bayern haven't been top at Christmas since 2010.

Dortmund are nine points clear of third-placed Bayern and a further two ahead of fourth-placed Leipzig. It's a significant divide, and teams that are top at Christmas win the Bundesliga title about 67 per cent of the time. But Bayern's 4-0 win over Hanover showed shades of the team that have won the last six titles.

"The team were fantastic for 90 minutes today," said coach Niko Kovac after his side’s third successive league win. "The way we played today, both with and without the ball, was very good. It was our best performance of the season in my view and I compliment the lads for that," he added.

But those words come with a caveat. Hanover are bottom of the pile, having won just two games all season, and Leipzig will likely provide a much sterner test at the Allianz Arena.

The Red Bulls also hit four at the weekend, with Yussuf Poulsen and Timo Werner both grabbing braces in the 4-1 win over Mainz, the latter's fifth brace of the Bundesliga season. But as soon as that one was over, Werner's mind was turning to Wednesday's clash.

"I think we delivered a good performance," the Germany striker told Sky before switching his attention to Bayern. "That is a tough game, we all know that. Not many teams win in Munich but we will try."

Despite Bayern's struggles this term, Werner's words ring relatively true. Only Borussia Mönchengladbach have won in Munich this season, but Freiburg, Augsburg and Fortuna Düsseldorf have all taken a point, giving Bayern only the seventh best home record in the league.

If they are to have any chance of catching Dortmund and making it seven titles in a row, that has to change. Bayern have already lost only one game fewer than they did in the entirety of last season and drawn the same amount. There remains no room for further slip ups.

- Two of the season's biggest underachievers meet early on Wednesday when Leverkusen travel to Gelsenkirchen to face Schalke. The home side are 11 places lower than they finished last season (2nd), while Leverkusen have dropped six places to 11th. Both need a win desperately but perhaps Leverkusen boss Heiko Herrlich needs it more than his opponent. Domenico Tedesco still has credit in the bank but Herrlich must be close to his overdraft limit.

- Things are looking grim for Nuremberg. The newly-promoted outfit haven't won in the league since late September, have the worst defense in the league and the second bluntest attack. But it's likely to get worse before it gets better, they travel to second-placed Borussia Mönchengladbach on Tuesday.

- The latest challenge to Borussia Dortmund's unbeaten record comes against the other newly-promoted outfit, Düsseldorf. Fortuna come off the back of a crucial win over Freiburg and caused Bayern a fair few problems in a 3-3 draw last month.

Basic errors, bad defending and a brace from Robert Lewandowski, so far, so familiar. The cracks in Bayern Munich were evident in a wild 3-3 draw that ensures top spot but it's clear the Pole still carries their hopes. (13.12.2018)