Bundesliga: Bayern Munich at their best in dominant win over RB Leipzig

Julian Nagelsmann made a triumphant return to Leipzig as his Bayern Munich side dominated the game from start to finish. Robert Lewandowski scored again as Jamal Musiala had an impressive showing from the bench. 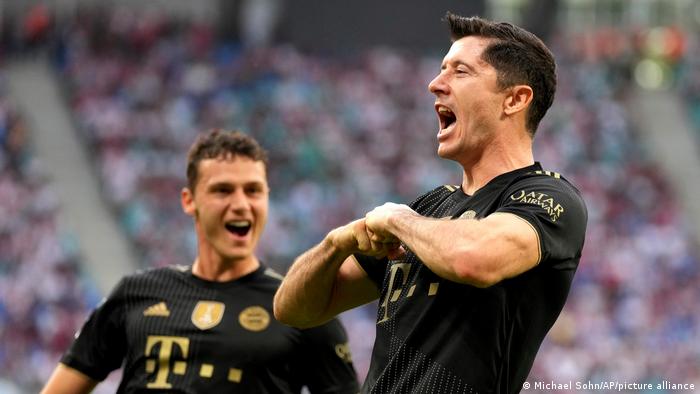 Saturday’s 4-1 win means Bayern have won seven and lost just one of the meetings between the two sides, with Bavarian wins often pouring cold water on title hopes from the east.

It may be too early in the season to do that this time round, but a Robert Lewandowski penalty and a brilliant second half display from Jamal Musiala that saw him score and set up Leroy Sane within nine minutes allowed the champions to open up a seven point gap on their opponents, despite a Leipzig fightback. Eric-Maxim Choupo-Moting wrapped things up in stoppage time.

"The special thing about him is that for all his skill on the ball he has such a great character," said Thomas Müller of Musiala after the game. "He's humble. To have that full package at such a young age is huge."

Nagelsmann handed a debut off the bench to Marcel Sabitzer, who followed him from the Red Bull Arena to Bavaria. The presence of another former Red Bull, Dayot Upamecano, at the heart of the Bayern defense was another nod to the weakened hand Jesse Marsch has been dealt since replacing Nagelsmann.

"We didn't play badly. We invested a lot and played to our limits," said the RB coach after the game.

But those limits were nowhere near enough to test Bayern, whose display, particularly either side of halftime, will serve as a marker to those who might have ambitions of challenging them, both domestically and abroad. While Borussia Dortmund’s win in Leverkusen hours earlier was a triumph forged in chaos rather than control, Bayern kept the second best side in Germany at arm’s length for all but a few moments after Konrad Laimer’s long range thunderbolt. 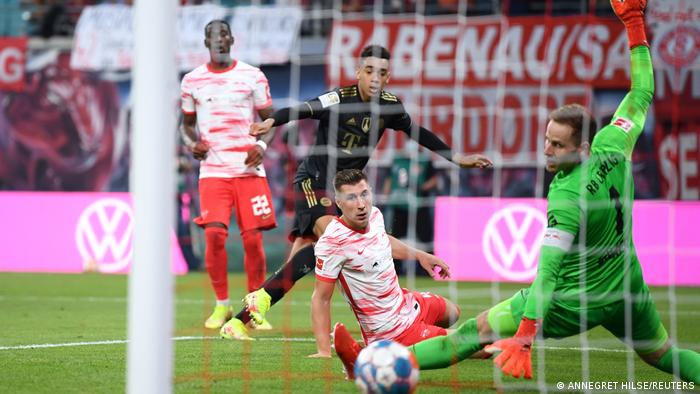 Musiala’s continued impact, scoring the first time he got the ball before displaying exceptional vision and composure for his assist, is a huge boost for his coach. As is the performance of Sane, who has endured a tough start to life at Bayern but now seems to be producing something close to the heights of which he’s capable.

The form of those two, and the addition of Sabitzer, gives Nagelsmann vital options in the week that European football starts with players still feeling the effects of an international triple header.

Bayern travel to Barcelona on Tuesday with the Catalans having enjoyed a break from action this weekend but without Lionel Messi and in constant turmoil off the field. Nagelsmann may be new to the job but he knows that the Champions League will likely define his tenure.

That’s assuming, of course, that he does the minimum; wins the Bundesliga. Early as it is, it’s difficult to see another outcome.

Relive the action on page 2 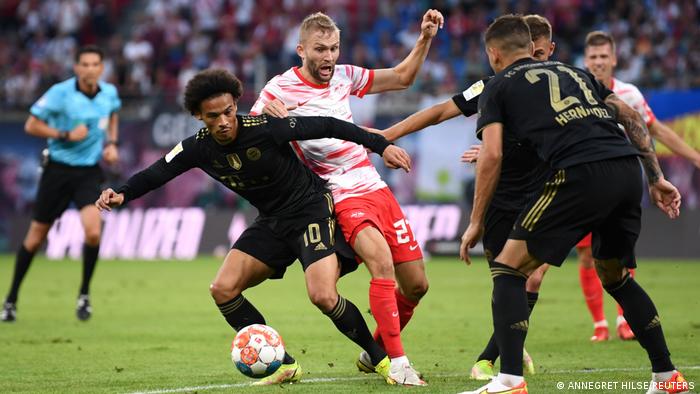 More clinical stuff from Bayern Munich. With Leipzig's defense caught unawares, Joshua Kimmich threaded a pass to Eric Maxim Choupo-Moting. The Cameroon international turned and fired for his first goal of the season.

Alphonso Davies was just clocked running 38.06 kilometers per hour (23.65 miles per hour). That is tied with Arminia Bielefeld's Bryan Lasme for the fastest sprint in the Bundesliga this season.

The Portuguese striker has come off in favor of veteran Yussuf Poulsen.

Silva, who joined Leipzig from Frankfurt for €23 million before the season, has not rediscovered his goalscoring ways. After scoring 28 goals last season, he has just one goal — a penalty — in four games.

After 229 appearances for RB Leipzig, Sabitzer has made his first appearance against his former team. Joining in 2014 from Rapid Vienna, the Austrian international spent six seasons with the Red Bulls, eventually becoming the captain last season.

He was part of a host of changes by both teams. Sabitzer and Eric Maxim Choupo-Moting replaced Leon Goretzka and Robert Lewandowski respectively, while Josko Gvardiol, Emil Forsberg and Amadou Haidara came on for Leipzig in place of Angelino, Dani Olmo and goalscorer Konrad Laimer.

58' GOAL! Konrad Laimer with a liner

How about that finish! Konrad Laimer finds the top corner from 20 meters out to draw one back for the home side.

Jamal Musiala has come on with a purpose, the teenage star setting up another for Bayern Munich. After receiving the ball from Thomas Müller on the right side of the area, he picked out Leroy Sane at the far post to double the visitors' lead.

That's two goals and two assists for Musiala in three Bundesliga games. Bayern may have another star in their ranks.

It didn't take long for Jamal Musiala to have an impact!

After replacing Serge Gnabry at the end of the first half, the teenage sensation burried an Alphonso Davies cross to double Bayern's lead.

The goal is Musiala's second of the season.

Some first half statistics from the game:

Serge Gnabry has been taken off after picking up a knock. Jamal Musiala, who has a goal and an assist in two games this season, has come on in his place.

Mohamed Simakan dove in at the crucial moment to stop Serge Gnabry in his tracks just outside of the six-yard box.

Simakan has held his own so far this term, starting every game for Leipzig in central defense alongside veteran Willi Orban.

The defending champions are looking at their dominant best, adapting their shape depending on whether or not they have the ball.

Alphonso Davies, who has returned to the starting lineup, is pushing up more as a wing-back when Bayern have the ball, with Serge Gnabry pushing back to give Bayern another wing-back on the right.

The Polish striker's goal from the spot marks the 14th consecutive Bundesliga game in which he has scored. He is now two games away from matching the late Gerd Müller's record of 16 straight games with a goal. 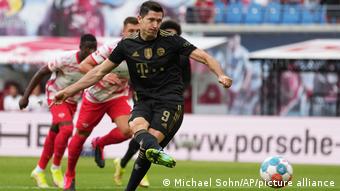 Robert Lewandowski converts a penalty to give Bayern Munich the lead

Referee Deniz Aytekin pointed to the spot, deeming Leipzig's Kevin Kampl handled the ball with his upper arm in the penalty area. Robert Lewandowski stepped up and converted the spot kick for his sixth goal of the season.

We are underway in Leipzig's Red Bull Arena. 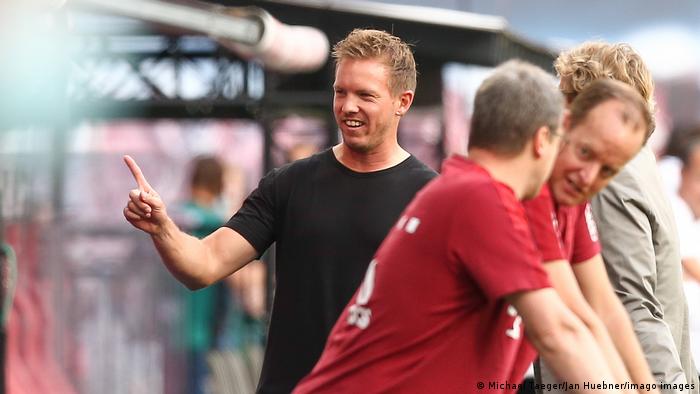 "I already miss all my former employers," Nagelsmann, who coached two seasons in Leipzig after joining from Hoffenheim in 2019. "Because I had such a good time with both Leipzig and Hoffenheim.

Nagelsmann received a cool reception from the home fans when he came onto the field before the game.

Marcel Sabitzer on the bench for Bayern Munich

Weeks after finalizing his move from RB Leipzig to Bayern Munich, Marcel Sabitzer will have to wait and see if he makes his Bayern debut against his former team.

Julian Nagelsmann has elected to keep the Austrian midfielder, a former Leipzig captain, on the bench to start the game. But don't be surprised if the 27-year-old, who has 32 goals and 27 assists in 145 games in the German top flight, makes an impact off the bench.

Alphonso Davies is set to make his Bundesliga debut after an injury scare during the international break. The Canadian international had picked up a knee injury while on international duty, but Nagelsmann said the star defender would be available for this game against Leipzig and next week's contest against Barcelona.

Frenchmen Benjamin Pavard and Lucas Hernandez are also set to make their season debuts. Pavard had been nursing a calf injury while Hernandez was recovering from a knee operation at the end of June.

Meanwhile, Dani Olmo, who represented Spain at both Euro 2020 and the Summer Olympics, will make his season debut for Leipzig. He had five goals and 10 assists in his maiden Bundesliga season last term.

Leon Goretzka's winning goal in the corresponding fixture last season saw Bayern stretch their unbeaten streak to six league games against Leipzig. The hosts only win in 10 meetings came courtesy of goals from Naby Keita and Timo Werner, dating back to March 2018.

From the coach's mouth: Jesse Marsch

"We couldn’t win all of our games, so there is more pressure on this game. But like I’ve already said, we’ll play without fear and be full of self-belief. You can’t lose to Bayern. Playing them always provides a good opportunity to show yourself."

From the coach's mouth: Julian Nagelsmann

"I'm very excited to come back. We had two very good years, and the coaching team are also looking forward to it. We'll find our way around, we just have to take a different turn in the stadium. I'm eagerly anticipating the game, even if there are a few people whistling." 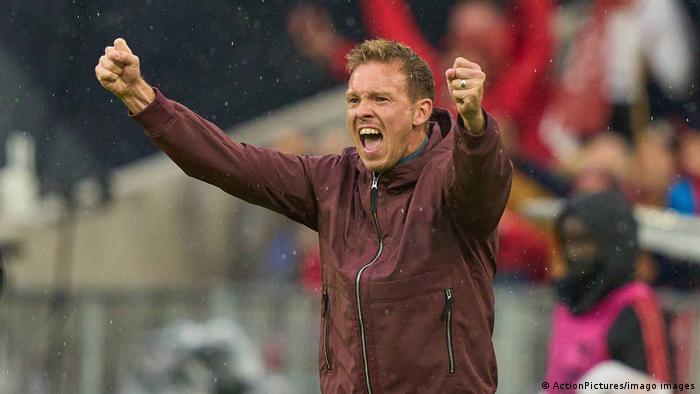 Robert Lewandowski is eyeing another Bundesliga record having scored in his last 13 straight league outings, a new personal best. Only Gerd Müller got on the scoresheet in more successive Bundesliga games, scoring in 16 straight in 1969/70.

From the player's mouth: Willi Orban

"We have to see [interest in Leipzig players] as a compliment for the good work done by each individual. But it obviously doesn't make it easier for us as a club and team when you have upheaval again year after year and lose a lot of good players."

From the player's mouth: Marcel Sabitzer

"With Leipzig, I worked my way up from the second tier to the Champions League semifinals and became a leader and captain along the way. I think I've given a lot back to the club and the city. I'm happy to come back, even if it's a bit tense."

Marcel Sabitzer was a boyhood Bayern fan, but fluffed his chance to join them during a trial aged 14, when he failed to impress Werner Kern, head of the club's academy at the time. "He trained as badly as I've ever seen anyone train. Even his agent apologized to me at the time."