Bayer Leverkusen are an exciting side packed with young talent, but inexperience can be their undoing. That was certainly the case in their Bundesliga opener as Borussia Mönchengladbach picked them off in a 2-0 win. 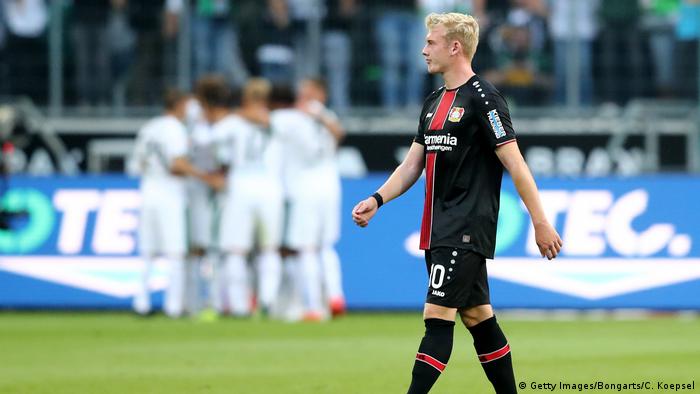 It all started so well. Leon Bailey struck the bar with a header, Julian Brandt (pictured above) did brilliantly to open up a chance that Kevin Volland couldn't quite take and Kai Havertz looked comfortable dictating from a deeper role than usual.

But then everything spiraled rapidly downwards. In 20 minutes straddling halftime, the Werkself had conceded two penalties, had two players booked, let a soft goal in from open play and lost three points.

First, full back Benjamin Henrichs cleared the ball in to his own arm to give away a needless penalty. Thorgan Hazard's spot kick was poor, and saved, but the let off wasn't heeded. After the break, Dominik Kohr and then Henrichs flew in to stupid tackles after loose touches, then Wendell played a shocking crossfield pass into his own penalty area. This was intercepted, forcing Aleksandar Dragovic to make a challenge and it was punished. Jonas Hofmann was less charitable than Hazard from the spot, putting Gladbach into the lead. 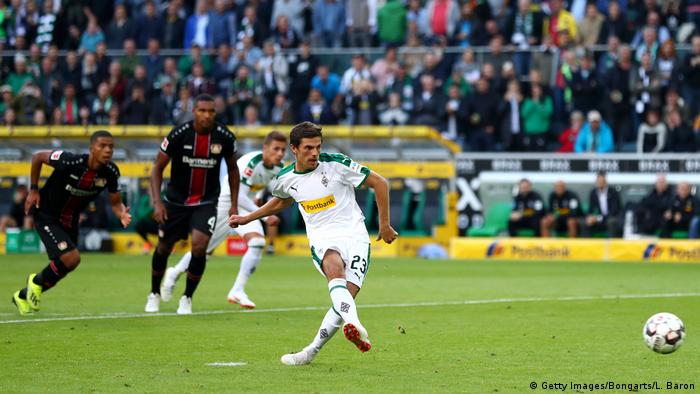 Jonas Hofmann scores from the spot for Borussia Mönchengladbach

Then the Leverkusen defense allowed veteran Brazilian forward Raffael to wander into their box, exchanging passes with Fabian Johnson before the American slotted home the second, less than two minutes after the first.

The two bookings and Wendell's suicidal pass were evidence of a callowness that, while understandable in a team whose outfield players averaged just 23 years, is Leverkusen's achilles' heel.

Bailey, Havertz and Brandt are all exceptionally gifted, comfortable on both feet, quick and destined for great things — whether at the Bay Arena or elsewhere. Henrichs and Jonathan Tah are also bursting with potential at the back, while new signing Paulinho is highly regarded. But all of them are under 22 and they will make mistakes, particularly when they must make decisions under pressure.

That lack of experience showed in the run-in last season, when Leverkusen blew a strong position after taking a single point from the three league games before the final day, with a 1-0 home loss to Stuttgart the low point. They missed out on the Champions League by three goals, having lost 4-0 to Borussia Dortmund, who pipped them to the post, during that late season run. 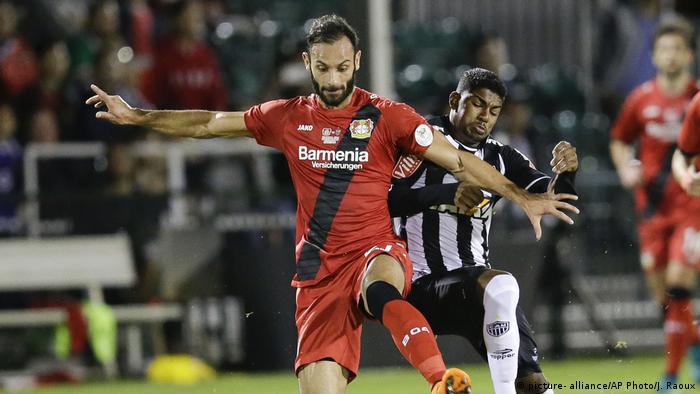 There were plenty of signs of the exuberance that carried them so high for so much of last season on Saturday, but they couldn't find a way back in to the game as Dieter Hecking's men closed things out.

Those flashes are where the hope lies for Heiko Herrlich's outfit but their moments of madness stood in stark contrast to the benchmark of German football. Bayern Munich wobbled on Friday night but Franck Ribery, Robert Lewandowski, Arjen Robben and Thomas Müller all combined to dig them out of it. All are older than the oldest Leverkusen outfielder on Saturday.

This isn't to say that Leverkusen should scrap their youth-first policy. It's still far too early to properly judge where they sit in the crowded cluster behind the Bavarians. But Jonas Boldt, the club's sporting director, may well wonder whether he should use the final week of the transfer window to help fill the leadership vacancy left by recently retired forward Stefan Kiessling.

Herrlich may decide that it's worth taking the rough with the smooth, that the brilliance of his young guns is worth the rash decisions that come with it. If he does, it's sure to be a bumpy, but entertaining, ride.

Late goals from Robert Lewandowski and Arjen Robben ensured Bayern Munich got off to a winning start in Niko Kovac's first league game. But VAR chaos reigned once again and Hoffenheim may feel hard done by. (24.08.2018)

Düsseldorf was buzzing as Fortuna played their first top flight home game in five years. But Friedhelm Funkel's side struggled in their season opener, showing issues that could haunt them in their Bundesliga return. (25.08.2018)