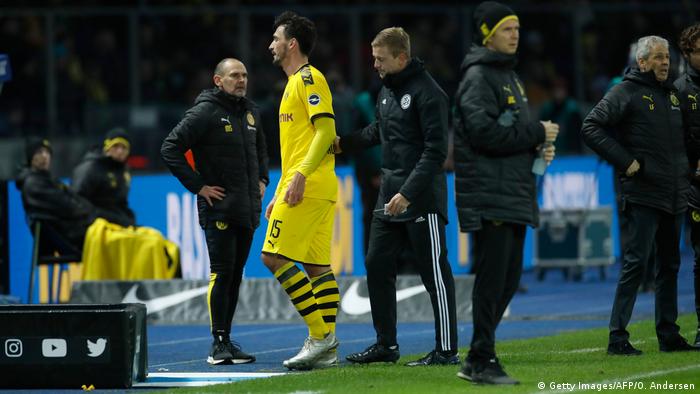 Lucien Favre lives to fight another day. Despite Mats Hummels seeing red for a second yellow at the end of the first half, Dortmund held on against a Hertha side that lost strength the longer the game progressed. It was a tough return to the dugout for Jürgen Klinsmann, who looks to have already made an impact on a struggling Hertha team.

Jadon Sancho and Thorgan Hazard scored two slick goals 104 seconds apart to put Dortmund on their way, but shortly before the break, Dodi Lukebakio's deflected strike got Hertha back in the game.

Hummels clumsy foul on Davie Selke as the Hertha striker broke through saw him pick a second yellow.

Straight after the restart, Selke had the ball in the net but the VAR ruled his effort offside and with that, the life seem to drift out of Jürgen Klinsmann's team.

The home side pushed for a late equalizer but Dortmund stood firm. Julian Brandt impressed in a win that saw Dortmund back in the top five. 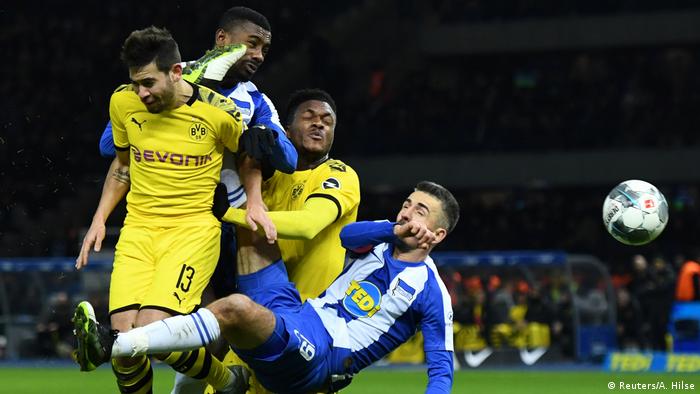 FULL TIME! Dortmund get a huge win that will feel all the better given that they had to play the whole of the second half with 10 men. A huge three points for Dortmund, and a result that keeps Favre safe for at least another week. A tough debut for Jürgen Klinsmann, who at one point thought the score was level.

90+4' Another massive chance for Hertha! A shot is blocked but it falls to Grujic and his shot is blocked, somehow, by a hoard of Dortmund players on the line. Safe!

90+2' Reus comes off for Götze. Favre doing all he can to make sure this one finishes with three points for Dortmund.

90+1' Was that it? Selke gets a free header at the back post but chooses to head it back across goal, but Kalou heads wide amid a throng of Dortmund players. This will be a frantic finale!

90' Sancho nearly steals in as Kraft comes out to clear it but he looks so tired the chance goes. Schmelzer comes on for Sancho as Dortmund look to make sure. No interaction with Favre as he goes off. There will be four minutes of added time...

85' Ibisevic is everywhere. Another stoppage, more frustration from the Berlin striker. Sancho doesn't like it and gets right up in his face. On we go, eventually...

84' Hazard can't continue, Piszczek is on. Incredibly, that's Dortmund's first sub of the day. Or maybe not, if you've been watching Favre ball for a while.

83' Hazard has cramp and nobody helps him. The referee stops play, and Ibisevic doesn't like it. He gets angry and tries to help Hazad off the field. Hazard doesn't like it, neither does Witsel or Zagadou. Ibisevic gets booked. Some rage building in this one. Not long left.

80' Witsel fires over from a corner as Dortmund finally trust themselves to put a ball in rather than play it short. Have to say, other than Selke's disallowed goal, the 10 men of Dortmund have played this really well in the second half.

74' The game is moving on and Hertha are running out of time. Grujic lets fly from range but Bürki gets down well to save it. This won't be pretty but it will be massive for Dortmund if they can hold on.

67' Hertha pushing here and so Klinsmann rolls the dice. Lukebakio and Stark make way for Ibisevic and Dilrosun. I understand the two of them coming on, but surprise that Lukebakio was brought off. He looked dangerous. Klinsmann looks like he's having to explain that decision to the Belgian too.

63' Former BVB player Marius Wolf wants a corner after flicking on Lukebakio's corner. Doesn't get one. This game is in the balance. 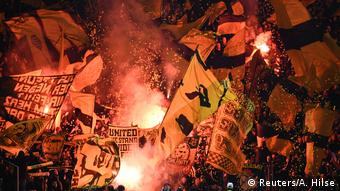 56' Dortmund seem to have dealt with that early pressure from Hertha after the restart. Reus wants a penalty, but he's asking too much. Hazard flashes a cross across the box, but no one is there. Really impressed by Julian Brandt in his roaming playmaker role. Done well to drive forward and try to create something for BVB today. Hertha still in it of course, but Dortmund look more in control than 10 minutes ago.

48' VAR SAYS NO! Well, that's a familiar sight. As the smoke from the away fans excitement drifts across the field of play, Grujic slips in Selke who turns the corner of the defender to tuck the ball into the far corner past Bürki. VAR takes a look and deems him offside. I think a millimeter of his heel is offside there. Klinsmann celebrates and then sits down. All the emotions in a matter of minutes. Dortmund, and Favre, breathe again.

46' The second half is underway. Dortmund have Zagadou and Akanji in the heart of defense with Hakimi and Guerrero out wide. Zagadou's face blocks Selke early on as Hertha show their intent.

45' HALFTIME! Well, Dortmund burst into life with two goals in two minutes but then a deflected strike got Hertha Berlin back in it before Mats Hummels saw a second yellow just before the break. Dortmund are under pressure now and will be grateful to come away with a point, but will that be enough to keep Lucien Favre in a job? 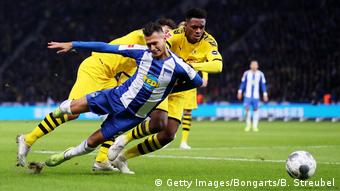 44' RED CARD! Dortmund were controlling their way to the end of this half and then that happens. Hummels, who is already booked, sticks a leg out to stop Davie Selke from surging forward and he knows it's a second yellow. This, just days after that poor display in Barcelona. Not a good week for Mats. Lukebakio strikes the free kick beautifully, but it hits the side netting.

39' We've got a game here now. Selke wants a foul against Zagadou and then minutes later against Akanji who denies him from breaking clear. Now it's Dortmund who need to get to halftime unscathed.

34' GOAL! Hertha grab one back (Darida)! That'll do! Lukebakio controls a long ball superbly, drives forward and then across the edge of the box. He thinks about shooting, waits, waits and then shoots through a crowd of bodies. Teammate Vladimir Darida sticks his foot and deflects the ball past a helpless Bürki. Great instincts! Hertha are back in it!

31' Akanji comes back on after Witsel covers him in defense for a bit. Lukebakio forces a save out of Bürki after some neat individual play in the box. That's a start for Hertha but they're going to need more. 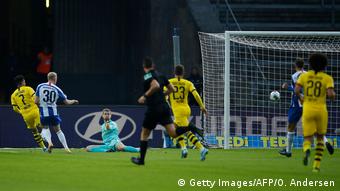 28' Akanji takes a knee to the back as he goes in for a header against Kraft. Small break in the play.

26' A counterattack is spoiled by Brandt's hesitation. This game has the potential to drift now, but it would Dortmund (and Favre) well to end the contest right here, right now. Hertha need to do all they can to prevent that from happening, and since the second goal they are battling back a bit. Time to win those mini battles before setting about the greater task of getting back into this game.

24' Brandt coming deep to get the ball is working. He's getting more touches and looking more dangerous too. The lack of a striker isn't a problem because someone, at least so far, will be on the end of a cross or the through ball.

21' It is all happening here. Darida is booked, then after Akanji has a header saved, Hummels is booked. A penny for Klinsmann, who has only had three odd training sessions before this game. He couldn't work magic. This Hertha team looks a troubled one. Mind you, a 2-0 scoreline is never safe, especially against Dortmund.

17' GOAL! 2-0 Dortmund (Hazard) Well, this one has burst into life! Akanji plays a strong ball out of the back to send Hakimi down the right. He stides forward and then plays the ball into the boxing to Hazard, who gets in behind the Hertha to defense to convert. A slick move and just like that, the hosts are sinking without a trace. 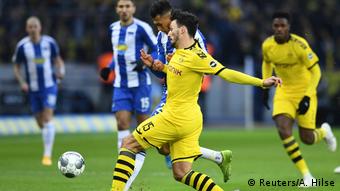 15' GOAL! 1-0 Dortmund (Sancho) A superb piece of play by Julian Brandt makes this happen. He looks up and then delivers the pass to slice Hertha's defense in half, feeding Sancho in on the left-hand side. The teenager makes no mistake, putting the ball into the far corner. It had to be him didn't it? Safe to say he looks focused and ready.

13' Niklas Stark has not started well. Maybe that Germany cap has gone to his head. An errant pass invites Dortmund, but they don't make it count. Feels like this one is teetering on the edge of excitement

10' Selke does enough against Zagadou to get a corner, but it comes to nothing. Ball goes down the other end, but Dortmund can't get the cross right and it's cleared. All a bit untidy at the moment.

6' Elbows flying early here. First Guerrero and now Boyata against Hazard. No handbags though, so on we go. Tactical note, Julian Brandt is coming very deep to get the ball. Looks more like Hazard is up top, or Reus. It's a yellow mystery.

3' A lively start, with Selke putting pressure on Dortmund's defense and Stark escaped after giving his keeper a hospital pass. Mind you, not as lively as in Paderborn. RB Leipzig are already 2-0 up. Crikey.

1' Dortmund get us started.

— "He has always helped us. He's a really dangerous player," Favre said when asked of Sancho. "We don't have to exaggerate. We conceded unnecessary goals against Barcelona and lacked patience when we had the ball."

The Swiss was coy about his formation. 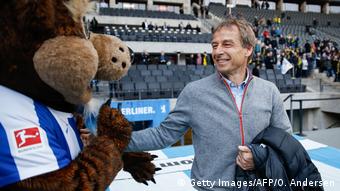 — Klinsmann is speaking ahead of the game today. "I've missed the broadcasts, the weekends, I could live just for the Bundesliga," said the 55-year-old. He was also keen to stress that he would do the job until the end of the season and the search for a new coach would start. He will then focus on his job upstairs at the club, which he has retained during his time as head coach. "It's important to be brave and to trust themselves, to take the crowd with them today and get a positive result," Klinsmann said.

— TEAMS! The Favre and Sancho saga continues, and the Swiss recognizes that his teenager's importance and starts him. Otherwise, it's a bit of a mystery really. Dan-Axel Zagadou starts, perhaps at right back? Julian Brandt in attack is brave, given how ineffective he has been of late in that position. The hosts have Thomas Kraft starting for the suspended Jarstein, and Lukebakio and Selke form a really strong front line.

— Welcome to DW's live blog on Borussia Dortmund's trip to Hertha Berlin. Dortmund are in desperate need of a win, more specifically their head coach Lucien Favre. A poor defeat to Barcelona last time out wasn't as damaging as the 3-3 draw against Paderborn before that, but either way BVB and Favre need to turn it around. Hertha have lost their last four in a row in the league, and the 4-0 battering at the hands of Augsburg ended Ante Covic's time in charge. Step forward Jürgen Klinsmann. Has he got the right tools to succeed? Time to find out.