Bulgaria's southern Turkey is speckled with German army tanks that remain pointed at the fellow NATO member. After decades of service -- from World War II to the Cold War -- their days are finally numbered. 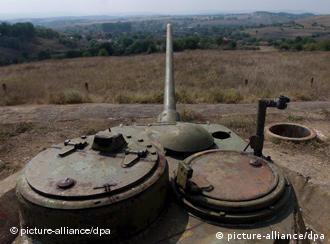 Turkey has clearly nothing to fear

Taking a closer second look, a visitor to the village of Fakiya in southeastern Bulgaria can just make out a rusting cannon some 10 meters (33 feet) off the side of a narrow road.

It belongs to a tank built in 1943 for Nazi Germany, with which Bulgaria was allied during World War II. Inside, the tank is filled with spider webs and rust. The serial number, stamp of the imperial eagle and a Nazi swastika are still easily recognizable.

Not far away, atop a small hillock, there's a second armored vehicle. Beneath some oak trees and overgrown with weeds, the tank perched on the edge of an abandoned vineyard has virtually merged into its natural surroundings.

There are still around 40 World War II tanks in the region next to the Turkish border, particularly in the towns of Sharkovo and Voden. The barrels are aimed at Turkey, only a few kilometers to the south.

Instead of scrapping the German tanks after World War II, Bulgaria's communist regime used them, along with Soviet T-34 tanks, to protect the southern border of the erstwhile Warsaw Pact against the neighboring NATO member. 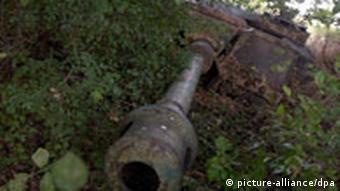 And they continued to do so until the regime collapsed in 1989. After that, the tank positions were simply forgotten. And in 2004, Bulgaria itself joined NATO.

"You can locate them along the boundary lines," said a border guard who patrols the area.

A former army master sergeant in the village tavern of Fakiya had more precise knowledge. But he shrugged off the idea of any mementos to be gotten from the tanks. He said all the moveable parts had long since been taken by collectors and scrap-metal dealers.

"Now we have no enemy to the south," said Petko Yotov, director the Museum of Military History in Sofia and a onetime colonel in the Bulgarian army.

The tanks are finally due to be scrapped in the fall, and Yotov was hopeful that his museum would acquire new items for the collection.

The Mediterranean island of Mallorca has come to symbolize everything bad about cheap, mass tourism: crowded beaches full of drunken louts and cheapskates. Buglaria's Black Sea Coast wants to avoid the same fate. (12.08.2007)

A document uncovered in the archives of East Germany's feared secret police proves for the first time that border guards had a clear shoot-to-kill order from the communist regime, officials said Sunday. (12.08.2007)

For years Flossenbürg has been regarded as one of the "forgotten concentration camps" of World War II. Now, a new exhibition has opened which tells the story of those who were incarcerated and who lost their lives there. (23.07.2007)