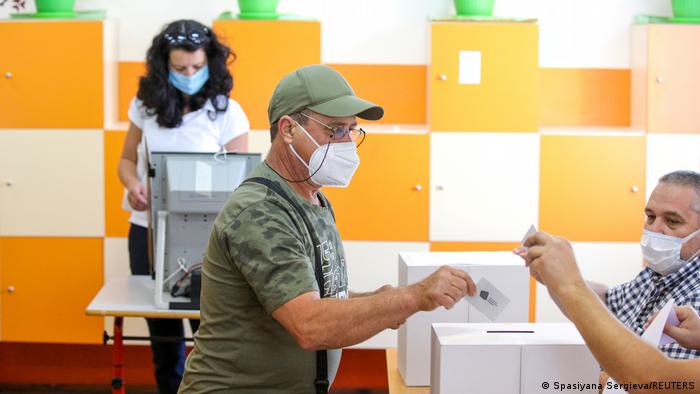 The center-right GERB party was unlikely to emerge as the clear winner, however, after garnering 23.9% of the vote.

The anti-establishment party There Is Such a People (ITN) of popular TV host and singer Slavi Trifonov is currently a close second, with 23.7% of the votes.

About 95% of the votes have been counted so far. Final results are expected on Tuesday.

The anti-graft groupings Democratic Bulgaria and Stand Up! Mafia Out! got 12.6% and 5% percent, respectively. The Socialists and the ethnic Turkish MRF party accounted for 13.6% and 10.6% of the vote, respectively.

"The most important thing today is that Bulgarians come out and vote en masse," Radev said after casting his vote in Sofia.

This was the way to create an "energetic, predictable and legitimate government," he said.

Borissov cast his electronic vote at a polling site outside of the capital Sofia and posed for photos with supporters afterwards.

GERB has been in power for most of the past decade, with Borissov at its forefront.

The party had won the regular parliamentary election on April 4 with 26% but failed in a search for coalition partners.

Other parties refused to form a ruling coalition to replace the interim administration — that was appointed after the inconclusive election in April — because of widespread anger at alleged endemic corruption and maladministration.

The ITN party received 17.6% but did not want to form a minority government.

Weeks of coalition talks, or even another election, are now possible, but political analysts say that even if official results confirm GERB as the largest party, its chances of creating a ruling coalition are slim.

Corruption in the spotlight as Bulgaria heads to the polls