Brzezinski: Syria strategy is a ′well-kept secret′ | World| Breaking news and perspectives from around the globe | DW | 26.08.2013

In a DW interview, former US National Security Advisor Zbigniew Brzezinski denounces what appears to be imminent military action against Syria, saying the US administration lacks a strategy for the region. 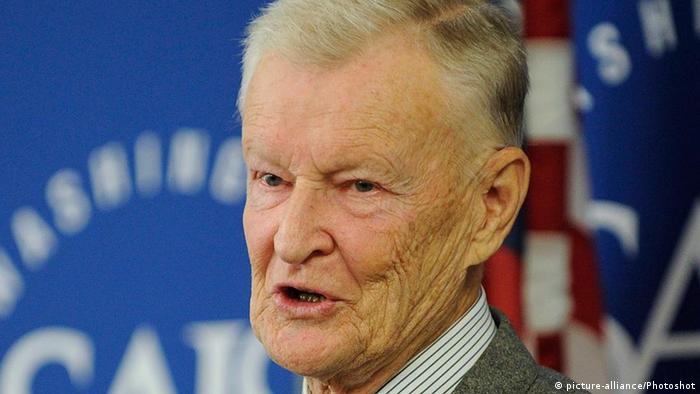 Zbigniew Brzezinski served as National Security Adviser to President Jimmy Carter from 1977 to 1981 and is regarded as one of the preeminent US foreign policy scholars. He is currently professor of international relations at Johns Hopkins University and a counselor and trustee at the Center for Strategic and International Studies in Washington, DC.

DW: After the suspected large-scale chemical weapons attack against civilians it seems some sort of military action against the Assad regime is now inevitable. Do you support military action or what is your sense of it?

Zbigniew Brzezinski: My view is that that action, if it is to be taken, should be part of some broader strategy. Otherwise it may be an appropriative punitive response, but would it solve the problem? Is there a strategy for the solution of the problem? And who is part of that strategy and who is not? Those are the questions which I think people have to think about seriously before plunging into a military action which - while perhaps morally justified in view of the nature of the offense involved, namely the anti-human acts - still will have consequences that may not be all that desirable.

Do you think the Obama administration has a strategy or a grander plan for Syria and its aftermath after military action?

If it does it's a very well-kept secret.

What kind of plan would you want to see?

It seems to me that the problem in the Syrian case is part of a larger dilemma regarding the upheaval in the Middle East. The solution to that upheaval cannot be based entirely on military power nor should it be dependent almost exclusively on the Western powers. I am struck how eager Great Britain and France appear to be in favor of military action. And I am also mindful of the fact that both of these two powers are former imperialist, colonialist powers in that region.

Given the contemporary reality of what I have called in my writings "Global Political Awakening," a policy of force based primarily on Western and in some cases former colonial powers does not seem to me a very promising avenue to an eventual solution to the regional problem.

You mentioned the need for a broader coalition that should be part of any military action. What do you mean by that?

I should think at the very minimum Turkey ought to be openly and directly involved if it takes place. And I think there should be some expression of approval for it and support for it from other powers that are very much dependent on some degree of minimal stability in the Middle East for their own economic well-being. In other words, I have in mind some of the Asian powers that depend so much on energy flowing stably from a Middle East which is not entirely set aflame.

You didn't mention Russia in your list of countries. What role should Russia play in your opinion?

A sensible role by Russia would be to join the international community in defining jointly some shared standards not only for a solution of the Syrian problem, but also for a wide-ranging accommodation with Iran regarding its nuclear program and the way it can be stably and predictably legitimated, and of course active support for a solution of the Israeli-Palestinian problem which causes some of the existing tensions.

All of these things have to be dealt with in a larger context and not confined in my view to a solitary military response by a small number of Western countries some of them with not particularly constructive historical experiences.

How do you interpret the fact that the Obama administration is not really trying to include the United Nations in this effort and is basically trying to recruit NATO to take part instead?

I am not sure you are right in characterizing the Obama administration like that. I think the Obama administration would like to have UN sanction [of a military mission - Ed.], but is concerned that such an effort would be vetoed by the Russians, conceivably even by the Chinese. That to me suggests that a great deal of serious discussions ought to be undertaken with countries that one way or another feel that they might be affected by the consequences of rapidly escalating violence in the region as a whole.

The problem in a nutshell is that the issue is larger than Syria and it cannot be approached as a purely Syrian problem. And secondly that retaliatory action for a morally serious transgression such as the chemical attack has to be nonetheless still part of a larger design with strategic objectives in mind and not merely punitive.

What kind of repercussions do you expect or fear after a possible military attack against the Syrian regime? President Assad has already threatened to draw the US into a second Vietnam War. Do you take that seriously?

Every analogy has some degree of appropriateness, but also can be very misleading. I think there are many aspects to the Vietnamese problem which are very different from Syria - not the least of which is the fact that there is opposition to Assad in Syria that is quite substantial, but not all that appealing in every respect.

To sum it up then, you are currently not convinced that imminent military action against Syria is the right move at this time?

I do not see the larger strategic context for it. And I am concerned that its participants are too narrowly based, that is, it is America and former colonial powers. That seems to me to create a political problem immediately.

The German government has demanded a "clear reaction" from the international community over the use of poison gas in Syria's civil war. What remained unclear, however, are the exact consequences Berlin is demanding. (26.08.2013)