Brown Meets Merkel on First Trip Abroad as British Premier | Europe| News and current affairs from around the continent | DW | 16.07.2007 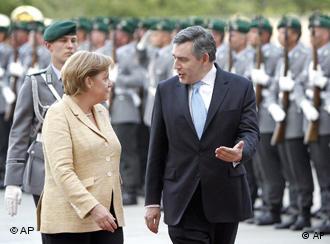 In a departure from his image as a staunch euroskeptic, Brown assured Merkel Monday of his cooperation on European policies. That included speedy approval in the British parliament for agreements on EU guidelines for a new treaty hammered out recently at a Brussels summit provided they were implemented in a new treaty text under Portugal's EU presidency.

Experts say Brown, who has met Merkel before at a summit in Berlin when he was chancellor of the exchequer, may find Merkel to be a leader he can work with. "She is "a conciliator and somebody who manages power in a non-triumphalist way," said Hugo Brady, a researcher at the Centre for European Reform in London.

"The problem will be if Brown, under pressure at home, demands more," Brady said.

Ahead of Brown's visit, the German government had praised his decision to make Berlin his first stop during his European trip. Merkel had said she hoped to continue the close relations with Britain she had enjoyed with Brown's predecessor, Tony Blair, adding it was particularly important for the well-being of Europe and transatlantic ties.

The meeting, which touched on security issues as well as climate and aid to Africa, was overshadowed by an earlier decision by Britain to expel four Russian diplomats from London over the poisoning of former agent Alexander Litvinenko.

"I have no apologies for the action we have taken," Brown said in Berlin. "I hope it's understood in other parts of the world that we are not prepared to allow a situation of lawlessness to develop in London as a result of a failure to act." 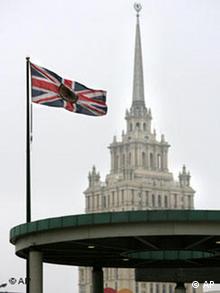 Relations between London and Moscow are at a low

Lugovoi is accused of administering a highly radioactive poison to Litvinenko when they met for tea in a central London hotel last November. Litvinenko, an outspoken Kremlin critic, died three weeks later in hospital.

"We want the best possible relationships with Russia. We want to work together with Russia, constructively on all the major international issues that we face, on Iraq, on the Middle East," Brown added.

A strong signal to Europe

Much has been made both in Britain and in Germany of Brown's decision to travel to Europe rather than flying to Washington on his first trip abroad since taking office. Analysts have speculated whether it marks a new shift in Britain's foreign policy and gives a clear signal to European leaders that Brown is serious about his country's ties with the EU.

Germany's Süddeutsche Zeitung said it was a positive sign that Brown had arranged to visit Berlin without even scheduling a date for his Washington trip. The prime minister appeared to prefer "a certain distance to the US more out of inner conviction than populist need," the paper said.

But Miliband on Sunday contradicted

speculation of a cooling of relations with Washington after the change of government in Britain, saying the US remained the country's "single most important bilateral partner."

Brown met the German chancellor just hours after a summit between Merkel and Nicolas Sarkozy in which the new French president spoke of a "great day for the Franco-German axis" after agreeing on a shake-up at ailing European plane-maker Airbus. Brown is to meet with Sarkozy on Friday. 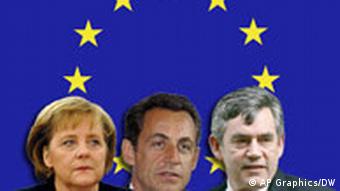 Experts believe it marks the establishment of a new axis between the leaders of Europe's three most powerful countries.

"It really has become obvious that Blair had a terrible set of partners [in Chirac and Schröder]," said Brady. "Brown is much luckier; he inherits a dynamic French leader and a chancellor who shares a lot of his basic instincts."

While traditionally, France and Germany have been considered closer to each other than to Britain, Merkel is capable as being as close to Brown as any French leader, argued Brady.

"If the pair forms a strong working relationship, they may even serve as a useful foil for Sarkozy," he said.

Roderick Parkes, a research associate at the German Institute for International and Security Affairs Parkes was less optimistic, believing that positive associations with Merkel and Sarkozy are expedient for Brown at a time when the leadership of Britain's traditional ally -- the United States -- is led by a president whose own political days are numbered.

The prime minister "encourages talk of a 'European trio' of Sarkozy, Merkel and Brown, associating himself with two politicians who are perceived as forward looking and are seen to have brought a new momentum to a stagnant European political landscape," Parkes said.

Looking to defuse a power struggle and ease tensions, France and Germany agreed on Monday to overhaul management at troubled European aerospace giant EADs and its Airbus subsidiary. (16.07.2007)

Passionately pro-European and Atlanticist, Tony Blair sought good relations with both the EU and the US, although his pragmatic successor Gordon Brown is more likely to achieve both. (15.05.2007)

British papers on Monday cautioned the new government against overreaction and a rush to introduce new anti-terror legislation. Elsewhere in Europe, Premier Gordon Brown's handling of the situation got mixed reviews. (02.07.2007)