Brompton Bicycles: No danger of folding | Business| Economy and finance news from a German perspective | DW | 25.12.2009

Brompton Bicycles: No danger of folding

One of the world’s most succesful folding bicycles, the Brompton, is experiencing a boom in sales as a younger and more fashion-conscious crowd catch the two-wheeled bug 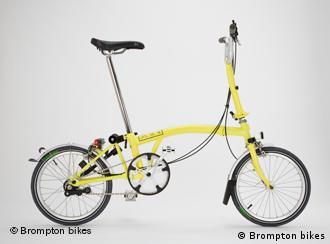 The Brompton bike is widely praised as a feat of engineering

The Brompton bicycle is admireFd the world round as a feat of British engineering. Often referred to as the ‘Swiss Army knife of bicycles’, the Brompton can be folded into a light, portable package in a matter of seconds, making it a commuter’s dream.

Until now, the Brompton has also been synonymous with rather eccentric British gentlemen over the age of 50, but with sales figures up more than 25% this year, the company is spreading its reach to a broader demographic. 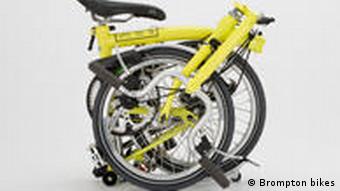 “We’ve seen this explosion of younger users who care about the environment, who care about their health, want to have fun, want to personalise,” says managing director Will Butler-Adams. “There’s been a tremendous surge in a great range of people - architects, designers - who sort of get what we want to achieve. So there’s been a real shift.”

Over the past seven years, the age of the average Brompton rider has dropped to below 40, and 35-40% of customers are now women.

While the fundamental design of the bike has remained the same, gentle tweaks and additions have made the Brompton far more appealing to female riders. The frame is much lighter, with bikes weighing between 10-12kg, and customers can fashion their very own bespoke bike from a selection of handlebars, saddles and gearing. 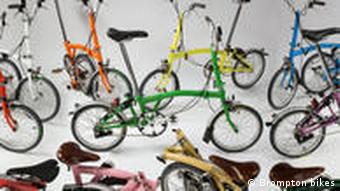 The Brompton is now available in 16 different colors

“It’s really good, a lot lighter, it’s easy to push around and you can get it in some nice colors. They’re really practical. It’s good that more people are seeing them as accessible,” said 22-year old Lizzie Evered, a development officer for a UK charity promoting the use of bikes amongst 10-20 year olds.

“If you really want to go mad you could even have a special color match for your favourite bag or whatever it happens to be. You name it we’ll do it!” he said.

The Brompton was invented by British engineer Andrew Ritchie in the late 1970s. After many years of manufacturers and banks turning him down, he managed to put his design into full production in 1988.

While demand for the bicycles has boomed since then, Brompton has resisted the temptation of outsourcing manufacturing on a grand scale, making sure that core elements of the bike are still produced in the London factory.

“At the moment, people can buy our product, they can try and copy it but they don’t understand the processes, the methodology, the jigs and fixes that we use to make it,“ said Butler Adams.

“If we would outsource it, we would be giving away our precious knowledge and suddenly the copies that exist, which are currently terrible, would become rather better.” 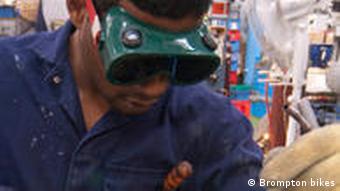 Core elements of the bike are still produced in-house

With a turnover of around 11 million pounds in a UK bike market worth a total of 450 million pounds, Brompton remains a small player. But Butler-Adams says a personal touch and a focus on quality are more important than market share.

“If you like, our marketing is the product and ultimately we are giving as good a value as we can that is the foundations of our business,” he said.

Starting at 650 pounds (725 euros) for the simplest model, the bicycle certainly isn’t cheap. But this has not deterred foreign cyclists from catching the folding fever. Exports account for 70 percent of company's sales. Germany and Holland are the main markets, but the Brompton can be found as far afield as Israel, Romania and Mexico.

For Butler-Adams, the latest upsurge in Brompton sales is indicative of a wider shift in attitudes towards cycling.

“I think there will be a huge change in the urban view… toward the likes of Copenhagen - of cities in Holland and Germany, where cycling is embedded in the infrastructure," he said.

"I think over the next 10-25 years we will see a big shift back towards integration of bicycles and cars and giving space to cycling in a safe environment,” he added.