Broken promises behind ongoing protests in Jordan | World | Breaking news and perspectives from around the globe | DW | 27.01.2011 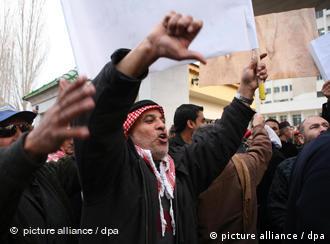 Jordan's protests have been aimed at Prime Minister Samir Rifai

As mass protests hit Egypt and Yemen, the Islamist opposition in Jordan has also taken to the streets in further protests, demanding that the king and government institute widespread political reform and tackle a stagnant economy in a country whose unofficial unemployment rate is around 30 percent.

The protests in Jordan, a strategically located country of six million considered more liberal than most in the Arab world, come in the wake of the unrest in Tunisia which toppled the government and as protests explode in Egypt and Yemen.

Last Friday, police said some 5,000 demonstrators held a peaceful protest in the capital Amman while other protests were staged in the cities of Zarqa and Irbid. They followed previous protests which attracted thousands the week before. The demonstrations have been spearheaded by the powerful Islamic Action Front, the political arm of the Muslim Brotherhood, and supported by trade unions and leftist parties. 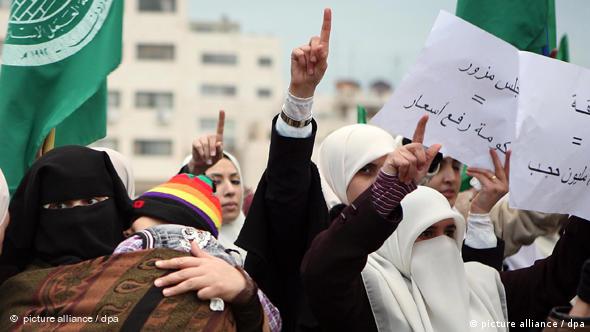 A main grievance of protesters is soaring food prices

Demonstrators have been calling for economic and political reform, denouncing the economic policies of current Prime Minister Samir Rifai, which have meant an end to subsidies for commodities and led to sharp increases in food and fuel prices.

While the official unemployment rate in Jordan in 2010 was 12.9 percent, with some 70 percent of the unemployed under 30 years of age, unofficial estimates put the overall jobless rate at 30 percent.

"Jordanians have been living in an era of disappointment for a long time," Oroub El-Abed, a Jordanian researcher at the University of London, told Deutsche Welle. "Today the government is reaping the fruit of that disappointment."

She said that starting in 1989, when Jordanians voted in their first general election since 1967, citizens were repeatedly promised change which would translate into better living standards and more jobs. But none of that change came about, she said.

"Today, there is widespread dissatisfaction about the disparities in the way money is allocated in this country and unhappiness about the system of political patronage that is very dominant," she said, adding that while there are opportunities for economic advancement in the country, most of them are attainable only by a well-educated few.

In addition, the cost of living in Amman is among the highest in the Arab world.

In a bid to slow the growing wave of discontent, Jordan last week announced a set of economic measures to help the country's poor in the form of a $230-million (167 million euros) package that aims to reduce the price of commodities, create jobs and increase pensions and the salaries for some civil servants. 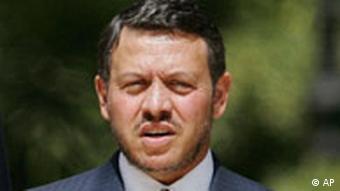 This week, King Abdullah II said that the country did need to tackle popular grievances, adding that senators and officials needed to be in contact with people throughout Jordan to "open a completely frank dialog with them on their ambitions, their interests and the issues of the day."

But so far, protestors say moves on the part of the king and government have not gone far enough.

"It is like giving someone an aspirin," Oraid Al Rantawi, a columnist with Al-Distour newspaper and director of the Al Quds Center for Political Studies, told Deutsche Welle. "It is good enough to deal with a headache for a while, but does not treat the serious disease that the patient is suffering from."

The protesters have repeatedly called for the government to step down and institute democratic reforms. King Abdullah II has extensive powers, with the ability to appoint governments, approve legislation and dissolve parliament. Protesters want the prime minister to be democratically elected instead of appointed by the king. 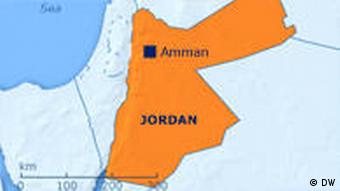 Jordan occupies a strategic position in the Middle East

But according to Nadeem Shahadi, a Middle East analyst at London-based Chatham House, promises have been made in the past regarding political and electoral reform - especially increasing representation in parliament. But, he said, "none of it gets executed."

"The prime minister feels that political reform would be suicide, especially given the 2006 election of Hamas in the Gaza Strip," he said. "The government is afraid of the Islamists, even though they lost seats in the last election."

On Thursday, Human Rights Watch accused Jordan of "stifling dissent" and curbing freedom of expression, saying prosecutors often initiate criminal proceedings against dissidents. The watchdog cited several cases where peaceful protests against government policies were prohibited or individuals were charged or sentenced to jail for their critical stances.

"If Jordan were a free country, criticizing the king and debating or peacefully protesting government policies would not be a crime," Christoph Wilcke of HRW told reporters in Amman.

Despite the fact that the protests in Jordan were sparked by the recent events in Tunisia, which have set off a chain reaction across the Arab world, observers caution about assuming a similar outcome. 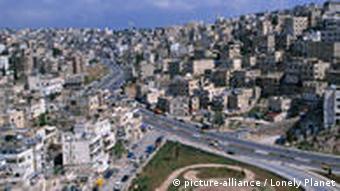 In relation to other Middle Eastern countries, Jordan is relatively liberal and affords a good degree of freedom to its citizens. While government-imposed censorship is not unknown, the country has a vibrant media landscape. The kingdom's security services have been known to harass critics and stifle dissent, but the level of brutality and invasiveness seen in countries such as Egypt is much lower.

Jordan also has a divided society - split among Jordanians, Palestinian refugees and displaced Iraqis - which can make it harder to mobilize a mass movement around a common aim.

"In many Arab countries, political change is firmly linked to regime change," said Al Rantawi. "In Jordan, one can imagine policy change without the need for regime change. A comparison with Tunisia is not an exact one."

Still, the Tunisian example is high in protesters' minds. When the protest wave began in Jordan, outside the parliament in Amman, demonstrators were heard chanting a new slogan. "A salute," they shouted, "from Amman to proud Tunis."

"If the government wanted to nip this in the bud, it's too late now," said Chatham House's Shahadi. "It's way beyond the bud now and completely unpredictable."

Splits within the Arab world’s foremost Islamist opposition movement, the Muslim Brotherhood, with its ties to Muslim communities in Germany and elsewhere, could be signs that the group is not interested in democracy. (15.11.2009)