Britons imprisoned for prepping acts of terror in Syria

Two British citizens have been handed lengthy prison sentences for preparing terrorist acts. The men had traveled to Syria to join an al Qaeda-linked terrorist group. 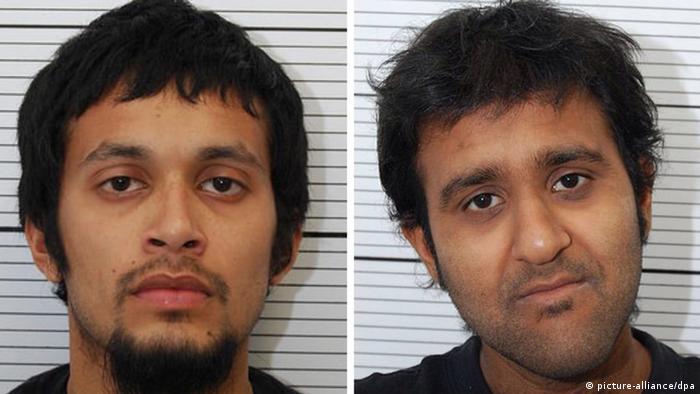 Mohammed Ahmed (left in photo) and Yusuf Sarwar (right) were each sentenced to nearly 13 years in prison on Friday after pleading guilty to one count of preparing terrorist acts.

The 22-year-olds, who are from the central English city of Birmingham, were arrested by counterterrorism police at London's Heathrow Airport on their return from Syria in January.

They pleaded guilty to the charges at their trial in July.

The two Britons had traveled to Syria together in 2013 to join an al Qaeda-linked terror group. The childhood friends spent eight months with the al Nusra Front.

Judge Michael Topolski said the two had "enthusiastically" tried to commit acts of terrorism and were deeply committed to violence.

In recent months, Britain had warned of an increase in the number of Britons joining extremist groups in Syria. Officials said some were planning to bring terrorist tactics back to the country.

Militants push ahead in eastern Syria

Meanwhile, the Britain-based Syrian Observatory for Human Rights had reported that "Islamic State" (IS) militants pushed forward in their offensive on a major military air base in eastern Syria on Friday.

The Observatory also reported that extremists had captured a village in an attempt to take one of President Bashar al-Assad's last outposts in a province that borders Iraq.

Activists said clashes had continued for a second day around the air base near the contested eastern city of Deir el-Zour.

The Observatory reported that IS fighters had captured the strategic village of Jafra, reaching the border fence of the large air base.

The Observatory said the clashes had started with an IS offensive early Thursday, killing 30 government troops and 27 of the group's fighters.

The key military compound was used as a major hub for government warplanes, which were used to bomb IS-held cities and towns across much of eastern Syria.

Control of the air base would enable the IS group to make major gains in the region.

A verdict has been handed down in Germany's first trial of a fighter with the "Islamic State" jihadist group. The accused was sentenced to a prison sentence of three years and nine months. (05.12.2014)

For the second time, coalition airstrikes have targeted non-"Islamic State" targets in Syria. The recent strikes were directed at the al Qaeda-linked Nusra Front and the hardline Islamist group Ahrar al-Sham. (06.11.2014)