The singer has told a court she wants her "life back" and asked for an end to the "abusive" control of her money and affairs. 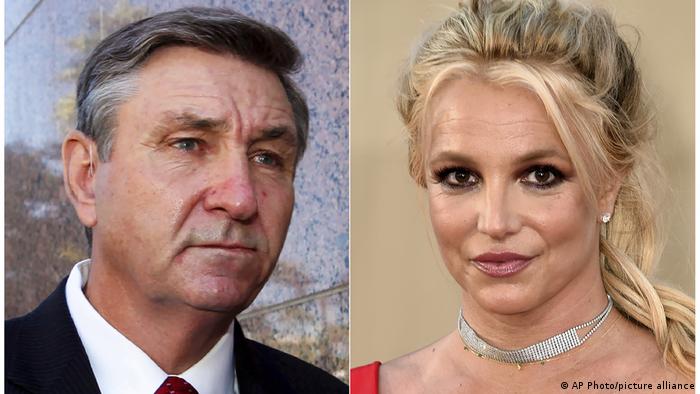 Pop icon Britney Spears formally requested on Wednesday that a judge end her father's control over her finances and personal life.

The hearing was the first time that the 39-year-old singer appeared in open court in the 13 years since the conservatorship was imposed. She had addressed the judge before, but the courtroom was always cleared and the transcripts sealed.

Some 100 fans had gathered before the hearing began waving signs that read "Free Britney now!" and "Get out of Britney's life!"

What did Britney Spears say?

Spears told the judge that she wanted to marry her boyfriend and have a baby, but was barred from doing so by the conservatorship. "This conservatorship is doing me way more harm than good,'' she said.

"I want to end this conservatorship without being evaluated,'' she told the Los Angeles court hearing in a long and emotional speech via telephone from a remote location.

She condemned her father who has been in control of the legal arrangement for most of the time since it was implemented in 2008 after the singer underwent a mental health crisis.

Judge Brenda Penny said that Spears' legal team needed to submit a formal petition to the court before she could take action. She also commended the singer's appearance saying "I know it took a lot of courage."

Why is Britney Spears under conservatorship?

The details of Spears' mental health issues have never been made public, but the singer credited the conservatorship with saving her from financial ruin at the time. However, her comments on Wednesday showed that the measures have left her "traumatized" and "depressed."

James Spears, the father, took over as conservator after the singer was taken to a psychiatric hospital following a custody dispute with her then husband, Kevin Federline. James, or Jamie, was given control over negotiating business opportunities as well as his daughter's properties. He also has the power to restrict visitors to her.

California law allows for conservatorship for individuals who are unable to properly look after themselves or to manage their own financial affairs.

Over the past 13 years, the singer has brought out several albums and performed hundreds of times as well as appearing on TV shows.