London columnist and writer Howard Jacobson has unexpectedly won Britain's prestigious Man Booker Prize for his humorous novel, "The Finkler Question." The decision breaks with tradition and stunned the author himself. 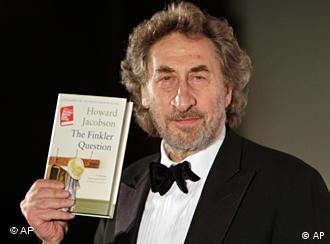 Howard Jacobson was "truly flabbergasted" to win this year's Man Booker Prize, the author told reporters after the presentation of the award Tuesday evening in London's Guildhall.

Jacobson's "The Finkler Question" is the first humorous novel to win the most esteemed literary award in the English-speaking world.

Previously longlisted twice for the prize, Jacobson had grown accustomed to going away empty handed and was not considered a favorite for this year's award. Nevertheless, he convinced three of the five judges, beating out favorite Tom McCarthy and two-time winner Peter Carey.

"They [the Man Booker judges] took me in their arms a little bit in the longlist - the shortlist felt like an embrace," said Jacobson, 68. "I never thought the affair was going to be consummated."

British newspaper The Guardian called this year's choice "a victory for that most overlooked genre on literary prize lists, the comic novel," while The Independent said the jury's decision "broke the mould."

"The Finkler Question," as Jacobson says, explores the Jewish experience in Britain. The main character, a BBC radio producer, is not Jewish himself, but becomes fascinated with Jewishness through two close friends.

The Man Booker Prize is endowed with 50,000 pounds ($80,000), but Jacobson said he's more interested in winning readers than making money.

"At my age it's less about how much comes into your bank account as wanting readers," said the author, who published his first novel 27 years ago. "It's very, very hard to get readers."

The long-awaited prize will no doubt help.

Born to a Hungarian-speaking family in a Serbian part of the former Yugoslavia, Melinda Nadj Abonji moved to Switzerland when she was a young child. Her writing draws heavily on this experience. (11.10.2010)