The United Kingdom has banned certain arms-related exports to the Egyptian military. London expressed concern that British military equipment could be used against protesters. 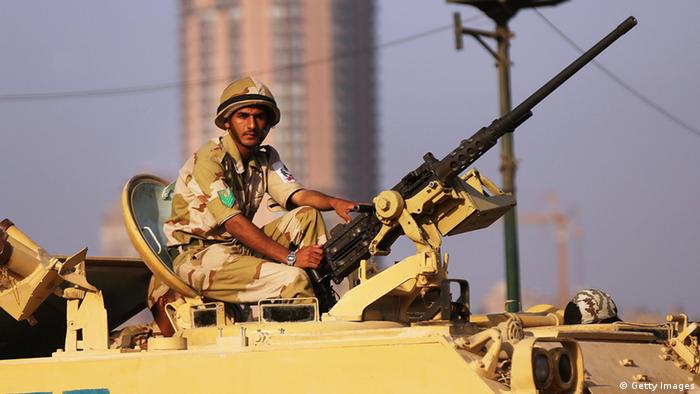 The British government on Friday revoked five export licenses for equipment used by Egypt's security forces, in response to the recent shooting deaths of protesters outside of the Republican Guard officers' club in Cairo.

“We are deeply concerned about the situation in Egypt and the events which have led to the deaths of protesters,” Business Secretary Vince Cable said in a press release.

“We will not grant export licenses where we judge there is a clear risk the goods might be used for internal repression, provoke or prolong conflict within a country, be used aggressively against another country or risk our national security,” Cable added.

The revoked licenses cover components for armored personnel carriers, machine guns, as well as radio and communications equipment used for tanks, according to a business ministry spokeswoman.

“Whilst we have no reports of British equipment being used in the unrest in Egypt, we have taken the decision to revoke five licenses,” Cable said.

The US has called for a quick return to democratic rule in Egypt. But with billions in aid at stake, Washington has stopped short of calling President Morsi's overthrow by the military a coup d'état. (04.07.2013)

Thousands of Muslim Brotherhood supporters took to the streets of Egypt on Friday, calling for the reinstatement of ex-President Mohammed Morsi.

Large crowds gathered at the Rabaa al-Adawiya mosque in Cairo, where Morsi supporters have been camped out since the July 3 military coup. Protesters marched toward the Republican Guard officers' club, the site of deadly clashes last week.

On July 8, more than 51 supporters of the Muslim Brotherhood were shot dead by security forces outside of the officers' club. Brotherhood supporters, believing that Morsi was being held in the club, had been protesting for the former president's release and reinstatement as Egypt's head of state.

While the security forces claim that the protesters sought to break into the club with the help of “armed terrorists,” the Muslim Brotherhood says that its supporters were killed in cold blood. Four soldiers were also killed in the clashes

"Morsi supporters were praying while the police and army fired live rounds and tear gas at them," said the Brotherhood, shortly after the incident.

US arms contracts under review

Meanwhile, the United States is reviewing its arms contracts with the Egyptian military. Under American law, Washington cannot sell weapons to a country whose democratically elected leader has been ousted in a coup.

“I have also directed the relevant departments and agencies to review the implications under US law for our assistance to the Government of Egypt,” US President Barack Obama said in a press release shortly after Morsi was overthrown.

The US gives Egypt more than $1 billion (761.61 million euros) in military aid annually. A current bill in the House of Representatives would continue American military assistance to Egypt, despite the coup.