The British government has accused Spain of violating its sovereignty over Gibraltar. A Spanish customs vessel and helicopter had chased suspected drug smugglers into waters claimed by Britain, but lost one fugitive. 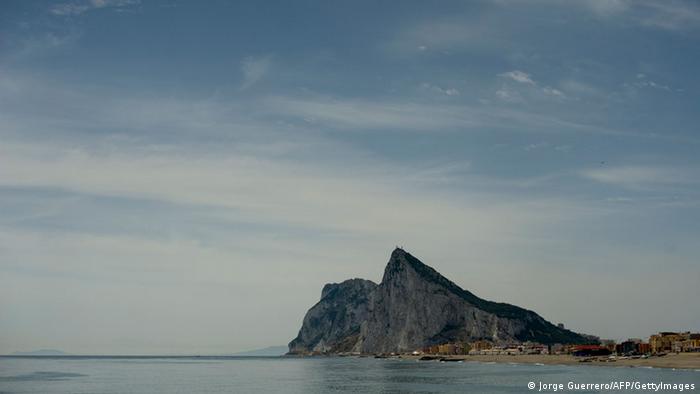 The British government on Sunday complained that Spain had violated its sovereignty over Gibraltar repeatedly and unlawfully, and said it would raise the matter with Madrid.

The grievance arose after Spanish customs officials chased suspected drug smugglers onto a beach in Gibraltar early on Sunday. Gibraltar authorities complained that Spanish police had failed to notify them.

British Foreign Office Minister Hugo Swire said he deemed the actions to have been "completely unacceptable and unlawful" under the international law of the sea.

"These repeated incursions into British Gibraltar territorial waters are a clear violation of UK sovereignty by another EU country and we will be raising this as a matter of urgency with the Spanish authorities," said Swire.

The chase reportedly began in the early hours of Sunday, some 18 kilometers (11 miles) out at sea in the Strait of Gibraltar. It ended on the shoreline at Gibraltar's Sandy Bay, a beach on the eastern side of the rocky outcrop.

The alleged smugglers jettisoned their cargo of drugs before hitting a submerged reef and leaving their stricken vessel behind. The Royal Gibraltar Police said the Spanish patrol boat deployed a small dinghy which entered the sheltered lagoon of Sandy Bay. 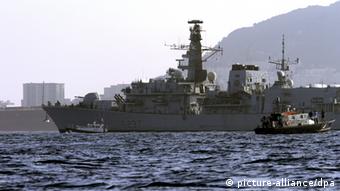 The UK has, in the past, deployed naval vessels when tensions rise around Gibraltar

Gibraltar police deployed to the scene arrested two of the suspected smugglers, but a third one escaped.

"We consider this has been a serious and unnecessary failure on the part of the Spanish customs service," said Gibraltar's chief minister, Fabian Picardo.

He blamed Spanish customs for acting in a way "that in effect has allowed a criminal who should be behind bars to get away."

Tense exchanges over Gibraltar are commonplace between London and Madrid, particularly when Spanish vessels attempt to take action in contested waters. Earlier this month, in an action dubbed "irresponsible" by Gibraltar authorities, a Spanish customs vessel chased a speedboat into a swimming area off another Gibraltar beach.

The smuggling of hashish to Spain, through the Strait of Gibraltar from Morocco, reaches a peak in the summer when the weather is more settled.

Spain permanently ceded Gibraltar to Britain in the 1713 Treaty of Utrecht, but has long argued that it should be returned to Spanish sovereignty. The British government has said it will not do so, in order to respect the wishes of Gibraltarians. In 2002, the local population voted overwhelmingly against shared sovereignty with Spain.

The British government has urged the EU to rethink the part of the Brexit deal that governs trade between Great Britain and Northern Ireland. But the European Commission has refused such requests in the past.

Economic boom in Tangier leaves a few winners and many losers 02.04.2021

Business in the Moroccan city has remained surprisingly robust in the pandemic due to its location at the nexus of global trade routes. But many locals have seen incomes fall as tourism struggles.