Brexit: Theresa May, Angela Merkel call for departure that benefits UK and EU

The clocking is ticking on Brexit and all signs point to an ill-prepared strategy. Angela Merkel and Theresa May, however, have struck a positive tone on the matter despite the challenges that lie ahead. 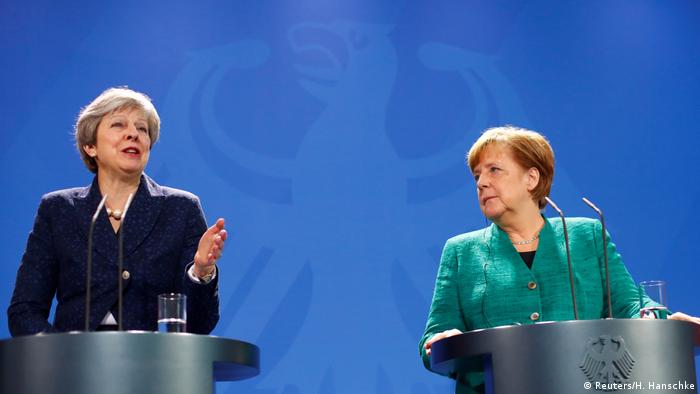 Following a meeting on Friday with British Prime Minister Theresa May in Berlin, German Chancellor Angela Merkel called for a "fair balance" in the final Brexit deal that will see the UK part ways with the European Union's 27 other members in March 2019.

"In the end there needs to be a fair balance of divergence, from the single market for example, and on the other hand a partnership that is not too close," Merkel said at a news conference. "This can be achieved and the 27 will ensure that the relationship is as close as possible but that there is a difference to membership."

Read more: How a hard Brexit could hurt Germany: Reckoning with the worst

Though other EU leaders have expressed consternation over the way Brexit negotiations have been proceeding, the German chancellor struck a more positive tone, stating that she was not frustrated with the negotiations.

Merkel added that she would like to see the EU stick to the proposed Brexit timeline and admitted the negotiating partners were under time pressure.

May echoed Merkel's sentiments, saying that she wanted a Brexit that benefited both the EU and companies in the UK.

"I want to ensure that UK companies have the maximum freedom to trade and operate within German markets, and for German businesses to do the same in the UK," Merkel added.

The UK prime minister was in Germany to attend the Munich Security Conference (MSC) alongside about 20 other heads of state and government, and 75 foreign and defense ministers. The key gathering for the international "strategic community" runs from March 16 to 18. 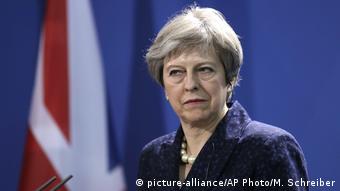 The prime minister added that she would announce her plans for the UK's future relationship with the EU on Saturday in Munich. Cooperation in the areas of foreign and security policy and economic and trade relations would be a particular focus, she added.

As May and Merkel gave their remarks in Berlin, the topic of Brexit was already on the Bavarian discussion table. Speaking at the MSC on Friday, the EU's top Brexit negotiator, Michel Barnier, repeated his call to London to clarify its vision for future relations with the bloc. Barnier said he was "working on a solution with Britain, not against them," and the two sides are heading for an orderly Brexit, rather than a "no deal" scenario.

Britain is leaving the EU on March 29 next year. However, the British government remains deeply split on the issue. The complex talks must be concluded before the fall to allow time for European parliaments to ratify any deal.

While an initial agreement has been struck, the details still need to be worked out. The key sticking points between the UK and the EU include the length of the Brexit transition period, the border between the Republic of Ireland and Northern Ireland, and EU migration into Britain after Brexit.

Another important negotiation that will shape the future of the bloc is Germany's attempts to form a government.

Merkel and her would-be coalition partners, the center-left Social Democratic Party (SPD), have agreed in principle on a coalition deal, but SPD members still need to approve it. Until they do so, Merkel's fourth term as chancellor is not a done deal. The uncertain political future in Germany, considered the bloc's financial powerhouse, could impact the stability of the EU.

Inside Europe: A coalition deal in Berlin