The leaders of the European Commission and Britain will hold a video conference after final post-Brexit trade talks broke down. British Prime Minister Boris Johnson said he was still "optimistic" a deal could be reached. 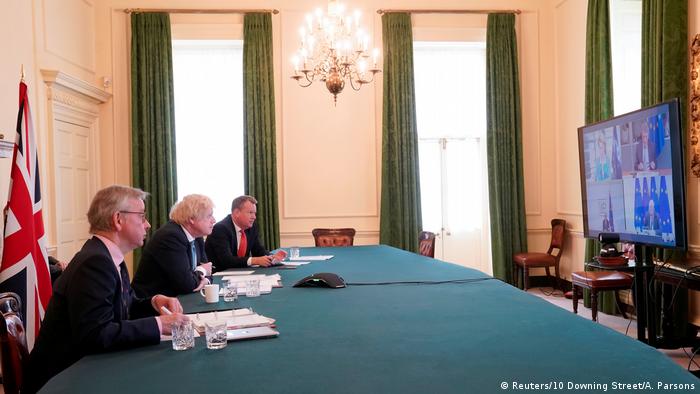 Johnson told The Daily Telegraph the chances of reaching an agreement before the end of the year were "very good if everybody just exercises some common sense and looks at the deal that is there to be done."

Von der Leyen's spokesman said the two leaders would be "taking stock of the negotiations" regarding their future relationship following the end of what was meant to be the ninth and final round of negotiations this week.

The talks broke up on Friday, having failed to resolve all the outstanding issues, including state aid rules and future fishing rights.

Britain's chief Brexit negotiator David Frost said "outlines of an agreement" are visible, but the two sides remain far apart on many issues.

"I am concerned that there is very little time now to resolve these issues ahead of the European Council (EU summit) on October 15," Frost said.

Speaking on the sidelines of another EU summit, German Chancellor Angela Merkel said she was still "optimistic" that a deal would be reached, but that "a lot will depend on what Britain wants."

Reuters cited diplomatic sources within the EU as saying that talks would likely continue ahead of the EU leaders' summit in mid-October.

Britain left the EU on February 1st and remains in the bloc's Single Market and Customs Union until the end of the year.

The two sides have been battling for months to come up with a rudimentary agreement that is supposed to take effect once the Brexit transition period ends.

Amid the deadlock, Johnson has said he is prepared to walk away if there is no agreement by October 15.

Complicating the talks further are Britain's plans to breach the EU divorce deal, an international accord to regulate trade on the island of Ireland, where both sides have their only land border separating the UK's Northern Ireland from EU member Ireland.

On Thursday, the European Commission — the EU's executive arm  — initiated legal action against London for violating the exit agreement through the Internal Market Bill, which passed the lower House of Commons this week.

The UK government now has a month to respond to the EU Commission's formal letter of complaint.

Concerns have also been raised about whether the new legislation will jeopardize the 1998 Good Friday Agreement, which helped to end the sectarian conflict in Northern Ireland.

On Friday, US special envoy for Northern Ireland Mick Mulvaney said he was heartened that all sides were trying to prevent the return of a hard border on the island of Ireland.

Mairead McGuinness told the European Parliament that the bloc needed "to avoid being overly dependent on a third country for key financial services."

Speaking at her confirmation hearing, McGuinness said the EU currently does not have sufficient knowledge to extend market access for UK financial services beyond the 18 months granted from next January.

"It's extremely difficult to grant equivalence without knowledge," she said, referring to London's lack of clarity on adopting equivalent regulations to the EU.

The EU has said respect for international law is "not optional," referring to UK threats to renege on parts of the withdrawal agreement. The UK has recognized it would be breaking international law by altering the deal.