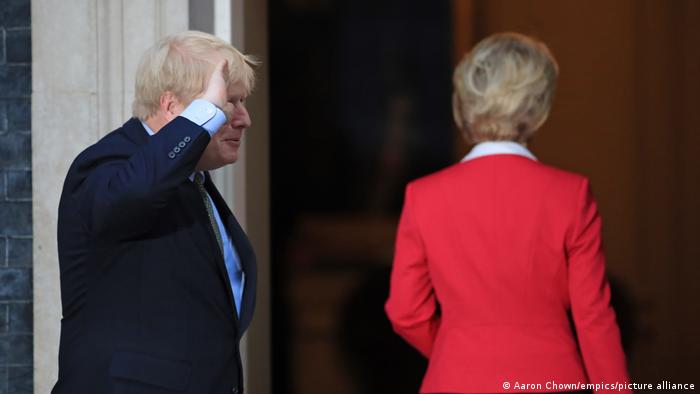 European Commission President Ursula von der Leyen and British Prime Minister Boris Johnson are set to hold a telephone call on Saturday after the EU and the UK made little progress this week in sealing a post-Brexit trade deal.

In a joint statement, the EU's chief negotiator Michel Barnier and his UK counterpart David Frost said: "After one week of intense negotiations in London, the two chief negotiators agreed today that the conditions for an agreement are not met, due to significant divergences on level playing field, governance and fisheries."

On this basis, "we agreed to pause the talks in order to brief their principals on the state of play of the negotiations. President von der Leyen and Prime Minister Johnson will discuss the state of play."

Talks that have gone one for a year became more intense this week as the clock winds down on how long negotiators have to reach a deal in time for the UK and all 27 EU governments to approve it.

As he entered a train station on Saturday for his return to Brussels, Barnier said he would continue to look for a way to do a deal.

"We keep calm, as always, and if there is still a way, we will see," he told reporters.

A day earlier, British Business Secretary Alok Sharma said talks were "in a difficult phase," while France warned it could veto any agreement that falls short of their demands on ensuring fair trade and access to UK fishing waters.

German Chancellor Angela Merkel stepped in on Friday to urge both sides negotiating in London to move past their red lines to strike a deal.

Asked about the state of the talks, Merkel's spokesman said Europe "is ready to reach an agreement with Britain, but not at any price."

"It's clear that there are red lines, yet there is always room for compromise," spokesman Steffen Seibert told reporters.

Should the UK and the EU fail to break the deadlock by December 31, trade between the pair would switch to World Trade Organization conditions, increasing the chances of severe economic consequences with tariffs imposed on goods and customs checks required at borders.

A Brexit deal would not only help improve continued trade, it could also help safeguard UK-Irish relations and the Good Friday Agreement, an accord that largely ended around three decades of political and sectarian conflict in Northern Ireland.

The idea of a trade bloc between Britain, Canada, Australia and New Zealand gained traction after the 2016 Brexit vote. Small when compared to UK-EU trade, proponents say it could help counter a rising, aggressive China.