The trial of the Norwegian man who confessed to killing 77 people in and around Oslo last year has resumed. Anders Behring Breivik is expected to testify on Tuesday a day after pleading not guilty to the charges. 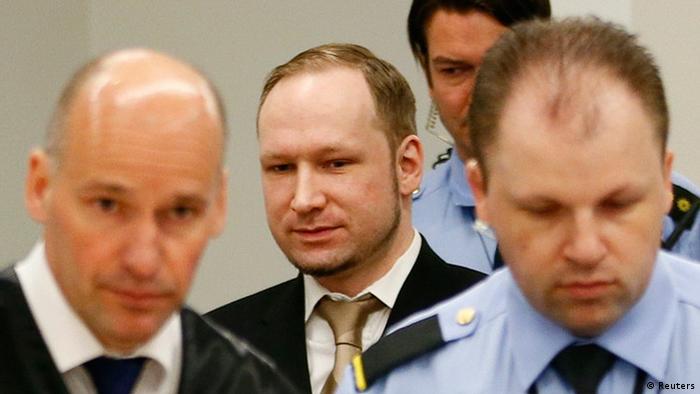 The second day of the trial of Anders Behring Breivik got underway on Tuesday, with the self-proclaimed right-wing extremist to take the stand in his defense.

Breivik pleaded not guilty on Monday to the charges of killing 77 people in near simultaneous attacks in Oslo and on the island of Utoya.

"I admit the acts but I am not guilty and cite self-defense," Breivik told Oslo District Court.

He entered the plea after hearing the public prosecutor read out the evidence against him, including the details of how and where each of the 77 victims died and more than 40 others seriously wounded.

Breivik showed no apparent emotion as prosecutor Inga Bejer Engh listed the details of the events of July 22, 2011, nor when prosecutors played a three-minute recording of a young girl's petrified call to police from the scene later on.

Shortly after arriving in the court room, the suspect had his handcuffs removed, after which he gave a closed-fist salute, used by right-wing extremists.

"I don't recognize Norwegian courts because you get your mandate from the Norwegian political parties who support multiculturalism," Breivik said.

Prior to the start of the trial, Breivik, who admits to being a right-wing extremist, argued that the attacks were necessary to protect Norway from being taken over by Muslims.

While he is presumed innocent until found guilty, there is little doubt that Breivik was responsible for the killings. He has admitted to having been behind the attacks on more than one occasion.

The biggest issue to be resolved would appear to be the state of his mental health, after two psychiatric assessments provided conflicting results.

If found mentally competent and convicted of the charges against him, he could face a maximum sentence of 21 years in jail - or an open-ended period of incarceration, should the court determine him to be a danger to society.

If he is found to be insane, he is likely to be held indefinitely in a psychiatric institution.

The trial is expected to last up to 10 weeks, with the next five days set aside for Breivik's testimony.