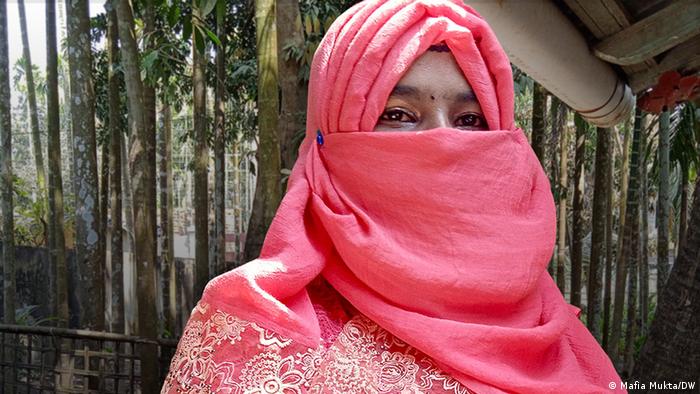 "For me, the biggest change was when I started asking people questions and raising my voice." 21-year-old Sabera (name changed) lives in the Kutupalong refugee camp in the Cox’s Bazar district in southeastern Bangladesh and is one of about one million Rohingya who have fled Myanmar. For Rohingya women, asking questions means breaking a social taboo. Sabera lives in a muslim community that, for religious reasons and social stigma, prevents women from taking on a stronger role. 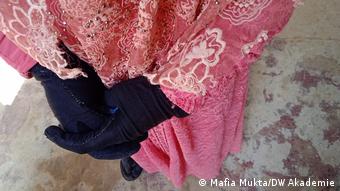 Sabera is afraid and wants to remain anonymous

In December 2018, Sabera began working at 'Palonger Hota' ('Voice of Palong'), a weekly radio show by refugees and locals that is aimed at a local audience. With support from DW Akademie, the non-governmental organization Young Power in Social Action (YPSA) produces the magazine program together with the community radio station, Naf. Sabera, who until then knew nothing about working for radio or the media, received training as a radio reporter. She went on to produce news and information for her community and brought her voice as a woman to a larger audience. "I had to convince my mother because she was worried about how my neighbors and relatives would react. But when she and the others started listening to my reports, they gradually changed their minds," Sabera recalls. In the radio program, Sabera addressed how women in the camp have to juggle motherhood and taking care of the family while longing for major changes in society. It’s important, especially for young women, to get a different view of life, she says. "We need to make people aware of child marriage, teach young women about the importance of getting an education, talk about women’s rights and help them see life differently," she stresses.

Slow changes – and then came the coronavirus 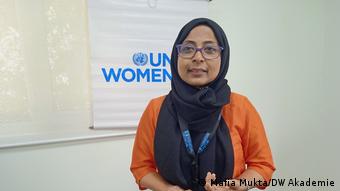 Nadira Islam works on the front line with Rohingya women

Nadira Islam is an analyst with the UN Women Gender Programme and works in Rohingya refugee camps. She says there have been ups and downs for the women there over the last four years. On the positive side, she says, they have gone being afraid to file complaints against the violence they’ve experienced and are starting to call for justice. "They can now voice their problems, their rights and their demands," she says. There are now more women working in the police force and a special emergency help desk offers women support. However, this has been clouded by the effects of the pandemic which has restricted movement and has led to the cancelling of activities by non-governmental organizations. The situation for women has become even more difficult. Although many contribute to their families’ livelihoods by sewing masks, for example, some now face threats by protection rackets who want a share of their earnings, Islam says.

Almost every Rohingya woman is a victim of domestic violence 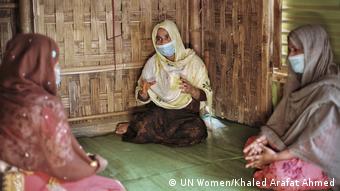 Women in a refugee camp in Cox's Bazar, Bangladesh

A study by the International Rescue Committee (IRC) shows that 94 percent of the women in the camps have experienced domestic violence. The underlying causes of gender-based discrimination are often based on long established beliefs, norms, attitudes and structures that promote or tolerate violence against women. The old structures are still part of Sabera’s life, too. Although she had been fighting for more equality and was gaining confidence, her new husband put an end to it. "He no longer allows me to work for Palonger Hota and has put a lot of restrictions on me. He used to beat me when I talked to other men or left our house on my own. But I have to obey him because society would reject me if I wanted to divorce him." Her story is like that of many other Rohingya women.

Changes to patriarchal structures happen slowly and are especially difficult when access to information is limited. "Radio has a great impact on the Rohingya because that’s how we get information. Many of us can still not read or write, and there is no television in the camp. Radio is the only communication channel we have for raising awareness about social issues, and that's why the Palonger Hota program is so important," she stresses. Sabera says that working in radio has given her hope.

This project is supported by the Federal Ministry for Economic Cooperation and Development (BMZ).

Reporting the coronavirus at a Rohingya camp: 'Saving lives is now the most important task'

A community radio station is working to inform the Rohingya in a refugee camp in Bangladesh about the coronavirus through reports over the loudspeaker and special broadcasts. The production conditions are a challenge.