A Brazilian judge has handed down 156-year-long prison sentences to 23 police officers found guilty in the Carandiru prison riot deaths of 13 inmates. The convicted officers have filed an appeal. 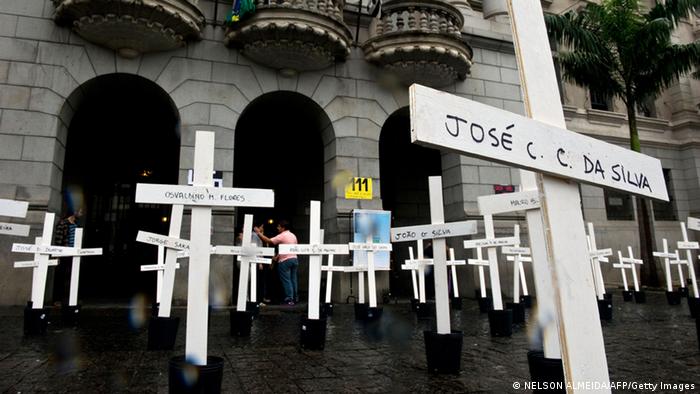 Twenty-three police officers on the scene at the 1992 riot at Sao Paulo’s Carandiru prison were found guilty on Sunday of killing 13 inmates. In all, 111 inmates died on October 2, 1992, a date now known as the day of the Carandiru "massacre."

The officers in question were originally charged with killing 15 inmates, but prosecutors said that two of those prisoners were stabbed to death by fellow inmates, bringing the charge down to 13.

Although Judge Jose Augusto Marzagao sentenced each of the officers on Sunday to a prison term of 156 years, the officers remain free as they await their appeal. Twenty-six officers had originally been charged, but three were acquitted.

The riot broke out at what was then Latin America's largest prison with some 8,000 inmates, although the building was designed to hold fewer than 4,000. The violence was apparently sparked by a brawl between rival groups of inmates and quickly escalated, raging on for nearly three hours before 300 police officers stormed the facility.

The convicted had argued that they fired in self-defense after being threatened and assaulted by prisoners. No officer involved in the operation, however, was harmed or killed, and survivors of the "massacre" have accused police of firing on inmates who had already calmed down or surrendered.

Evidence later revealed that military police had shot prisoners and then destroyed evidence, which may have helped determine individual responsibility for the deaths. Autopsies revealed that the dead were struck with an average of five bullets.

The "massacre" has become a notorious symbol of police brutality and impunity in Brazil.

Until recently, only one person had been tried in connection with the killings. Col. Ubiratan Guimaraes, in 2001, was sentenced to 632 years for using excessive force when he ordered police to quell the rebellion.

His conviction, however, was overturned in February 2006, based on arguments that Guimaraes was merely following orders. Guimaraes was found dead in his apartment under unclear circumstances later that year.