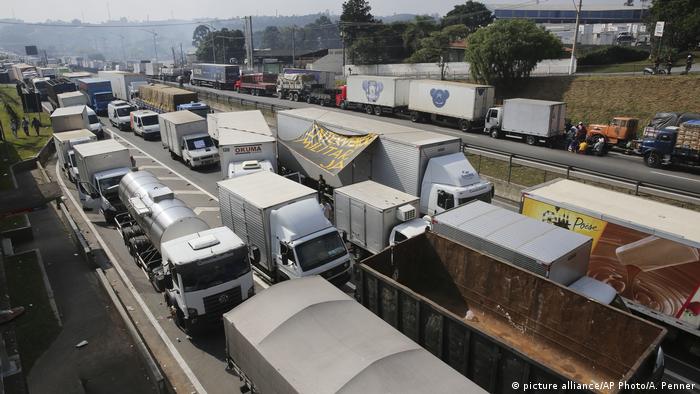 Brazilian President Michel Temer announced on Sunday that his government would set a lower price for diesel, in a renewed effort to end a national strike by truckers that has led to shortages of fuel and food.

Despite the government's having reached an agreement with transport unions on May 24, nearly 600 roads remained partially or fully blocked throughout the country, as many truckers were not satisfied with the deal.

Over the past week, thousands of schools have canceled classes, many flights were grounded, gas stations were virtually out of fuel, and stores were quickly running out of perishable foods, as the strike had brought much of nationwide commerce to a halt.

The continued state of paralysis led Temer to agree to four more demands, in addition to fixing the price of diesel temporarily.

"We have done our part to ease the problems and suffering," Temer said during a televised appearance, adding that he was aware of reports that millions of animals could die of hunger if the crisis did not ease.

Temer said the new measure would cut 0.46 reals per liter of diesel and that this new price would be maintained for a period of 60 days. The president said he had conceded to the four other demands made by the truckers' union.

Because the state-run Petrobras oil company has autonomy to set its own pricing, Temer said the government would pay the difference between the price set by Petrobras and the new reduction for the next 60 days. In essence, the cut will be a temporary government fuel subsidy.

Read more: Brazil headed for worst recession in a century (2016)

The truckers' shutdown comes as Brazil is struggling to recover from a deep recession, the real has devalued against the US dollar, and oil prices worldwide have increased, recently owing to uncertainty about the repercussions of Donald Trump's withdrawing from the multinational nuclear deal with Iran.