Brazil headed for worst recession in a century | Business | Economy and finance news from a German perspective | DW | 03.03.2016

Brazil headed for worst recession in a century

Latin America's biggest economy has reported its steepest annual decline in gross domestic product (GDP) since 1990, setting the country on course for its worst recession in at least a century. 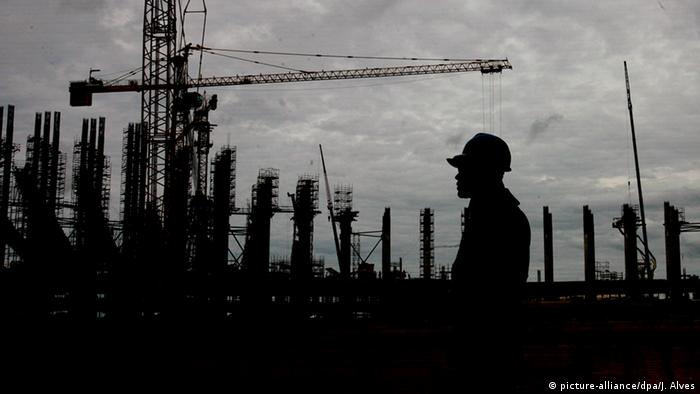 According to government figures released Thursday, Brazil's economy contracted by 3.8 percent in 2015 - the biggest annual fall since a 4.3-percent dip reported some 25 years ago.

With the International Monetary Fund (IMF) predicting a further decline of 3.5 percent this year, Brazil appears to be heading into its longest and deepest recession since records were first taken in 1901.

Leading the slide in 2015 was the industrial sector, down 6.2 percent, with the all-important mining sector slumping by 6.6 percent in the final quarter alone, reflecting a worldwide commodities crisis that saw prices for Brazil's iron ore and raw materials plunge dramatically. The country's services sector contracted 2.7 percent for the year on the back of runaway inflation of more than 10 percent and spiraling unemployment.

The new GDP figure condemns Brazil to the bottom bracket for Latin American growth, with only Venezuela doing worse after a 10-percent slump in 2015.

Brazil's ugly growth picture is unlikely to change any time soon given the current political uncertainty in the world's seventh biggest economy. President Dilma Rousseff is beset by an impeachment attempt and a massive corruption scandal that has engulfed many top political and business figures.

Meanwhile, all three main credit rating agencies have downgraded Brazil to junk status, with Moody's warning of deterioration in the country's debt metrics in a low-growth environment. Government debt was likely to exceed 80 per cent of GDP within three years, the agency said in a news release, and pointed to "challenging political dynamics" that were expected to continue to complicate fiscal consolidation and delay structural reforms.

The country of 204 million people was only recently being touted as the emerging markets giant that had finally found its feet, with the Olympic Games due to take place in Rio this August symbolizing that new status.

Djilma Rousseff's generous spending programs were credited with lifting millions out of severe poverty, and the country's mineral and agricultural riches were in hot demand in China.

However, the party has now come to a brutal end, and Rousseff's leftist government seems to have hardly any options left amid the current global economic slowdown.