Naser Oric, known for his role in organizing the defense of Srebrenica, had been accused of murdering Serbian soldiers. He was one of a small handful of Bosniak leaders to face trial for war crimes. 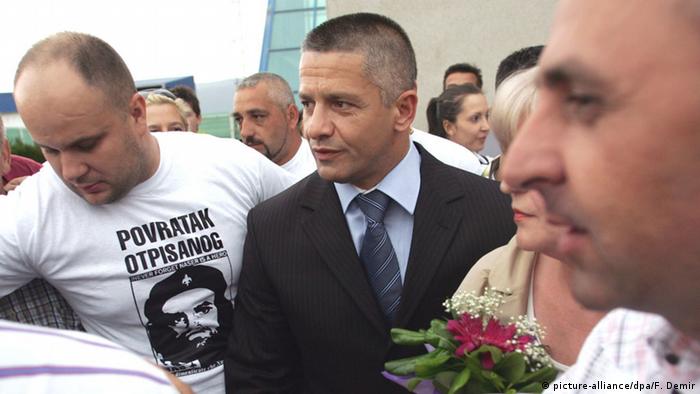 The former commander of Bosnian Muslims in Srebrenica, Naser Oric, was acquitted at a war crimes trial in Sarajevo on Monday.

Oric and one other defendant had been accused of murdering three prisoners of war during the Bosnian War, which lasted from 1992 to 1995.

Many Bosnian Muslims consider Oric a war hero for organizing the defense of the city of Srebrenica, where Serbian troops later slaughtered 8,000 Muslim boys and men. Many Serbians see Oric as a murderer.

Read more: What was the Srebrenica massacre?

During the trial he was applauded by women from Srebrenica when he entered the court room.

When war broke out Oric returned to his hometown of Srebrenica to organize its defense. He was withdrawn for military training three months before Srebrenica fell to Bosnian Serbs in July 1995.

In 2006 the International War Crimes Tribunal handed down a two-year prison sentence to the 50-year-old for not doing enough to protect Srebrenica's Serb population during the war, but this was later overturned on appeal.

Upset by the acquittal, Belgrade in 2014 accused him of leading "several attacks against Serb villages in the Srebrenica region, to empty them of their Serb population by intimidation, torture and murder." About 2,500 Serb civilians and soldiers were killed in the area during the conflict, according to estimates by victims' associations.

In 2015, Serbia's then-prime minister and now president, Aleksandar Vucic, accused Oric of gouging out a prisoner's eyes before killing him in 1992. For that crime Oric was tried in Sarajevo alongside another suspect in which they both pleaded not guilty.

"As a soldier, I have no remorse," Oric said at the time.

Oric is one of a small handful of Bosnian Muslim commanders to face trial for atrocities committed against Serbs.

Separately last week, the Netherlands announced its intention to appeal a Hague decision that found it was partly to blame for the Srebrenica massacre.

In June the appeals court in The Hague ruled that "the Dutch state acted unlawfully" and that its United Nations peacekeepers knew Muslim men and boys separated by Bosnian Serb forces from their families faced a "real risk" of "inhumane treatment or execution."