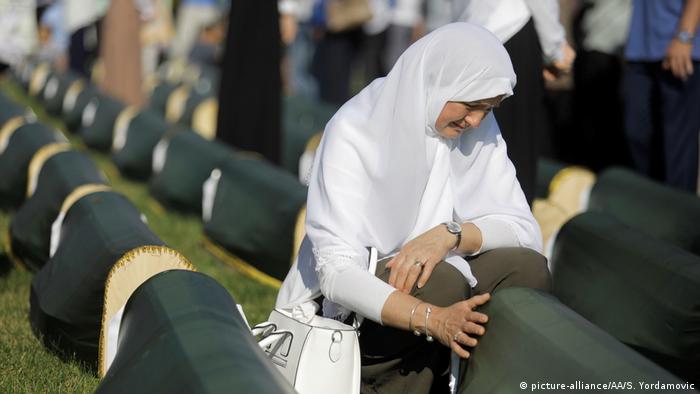 Thousands of people gathered in the Bosnian village of Hambarine on Saturday for the mass funeral of 86 Bosniak Muslims who were executed by Bosnian Serbs at the start of the country's 1992-95 war.

The service was held inside a football stadium, where mourners stood behind rows of coffins draped in green cloth.

The remains of the victims were found in 2017 at the bottom of a ravine in the Koricanske Stijene mountain range in central Bosnia.

They were among some 200 Bosnian Muslims and Croats from the northwestern town of Prijedor who were shot dead by Bosnian Serb forces on August 21, 1992. 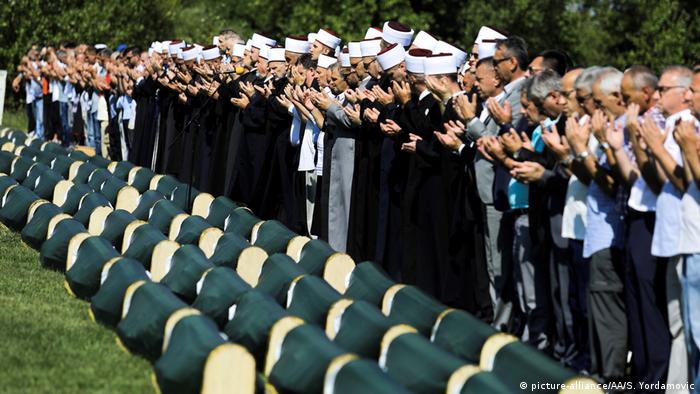 Many of the victims were only recently identified

Jasna Elezovic, who came to bury the remains of her father, brother, two cousins and uncle, said their bodies were found only last year.

"It feels like it all happened yesterday ... the anguish remains the same," she told Reuters news agency.

The victims were being held at a detention camp near Prijedor when they were loaded onto buses and told they would be released as part of a prisoner exchange.

They were driven to the Koricanske Stijene. But instead of being freed, they were lined up on the edge of a cliff and executed. Their bodies, dumped in a steep 100-meter-deep (328-foot-deep) gorge, were covered by rocks to prevent them from being found.

Nasima Mrkalj, 71, who now lives in Denmark, says a bone and two teeth belonging to her husband were unearthed during the first exhumations in 2017.

"Now, we found more remains and we have decided to bury him," she said. "On one hand, I am satisfied, but pain is stronger than that satisfaction."

The massacre was one of the worst atrocities of the inter-ethnic conflict, which claimed around 100,000 lives by the time it was over.

During the war, more than 3,000 non-Serbs were killed in Prijedor alone. Tens of thousands of people were driven from their homes. Some 650 individuals are still unaccounted for.

The United Nations war crimes tribunal for the former Yugoslavia has sentenced several ex-Bosnian Serb policemen for their role in the massacre. The suspected mastermind of the killings, Prijedor police chief Simo Drljaca, was killed in a shootout with NATO-led peacekeeping forces in 1997.

Protesters led by an aggrieved father took to the streets to demand resignations from top police officials in Bosnia's Serb entity. The father accuses the police of covering up the murder of his son, David Dragicevic. (31.12.2018)