Borussia Dortmund's Jude Bellingham: How to make the complete midfielder

Jude Bellingham has packed more into his career by age 18 than many players do in decades. DW takes a trip back to his home town to find out how the Borussia Dortmund and England midfielder became the player he is.

To stand out both technically and mentally at any major European football club at 18 is impressive. To do so among Borussia Dortmund's band of young brothers takes something special.

Jude Bellingham appears to be just that. For him, footballing life under the spotlight seems simple enough.

"I’ve been given my chance in the league, in the Champions League, in the cup, and I’ve taken it so far," he told DW. "So I've just got to keep going."

With more than 100 senior appearances in England, Germany and Europe, the record as the youngest player to feature in a European Championship match and a German Cup win, whatever the mature midfielder is doing, it is clearly working.

His importance to Dortmund is underlined by the fact he has started each of Marco Rose's first 12 games in charge at the Westfalenstadion, with only Manuel Akanji and goalkeeper Gregor Kobel racking up more minutes than the Englishman this season.

That Bellingham was one of the first names on Dortmund's teamsheet against Mainz on Saturday is no surprise to Mike Dodds, the head of the academy at Birmingham City, where Bellingham began his career, making his debut just 38 days after his 16th birthday.

Though it's not unusual to see teenagers get so many minutes at Bundesliga clubs, it is unusual to see them dominate the central midfield in the way that Bellingham often does.

His rare mix of drive, composure, vision and assurance has helped form the sort of all-around midfielder that has become rarer as the position has become increasingly specialized in recent years.

Bellingham's upbringing in and around Birmingham, in the Midlands of England, has helped shape him into the player and person who has turned heads. His off-pitch interviews are as relaxed, natural and eye-catching as his displays on the turf. One person in particular gets plenty of credit.

"My mum is the best woman in the world in my eyes," Bellingham said. "She does everything for me, and I couldn't thank her enough for everything she does."

Denise Bellingham is as proud as you'd expect. "I knew he was capable of it from the way he was at school and everything," she said. "But the past year he's grown so much. A lot has happened in a short space of time. I can't believe it but yeah, if he's happy, I'm happy."

The Bellinghams are certainly doing something right. Jude's younger brother, Jobe, 16, has already been named in Birmingham's first team squad and the older of the two says Jobe is "doing really well. So like a normal big brother, I'm so proud of him." 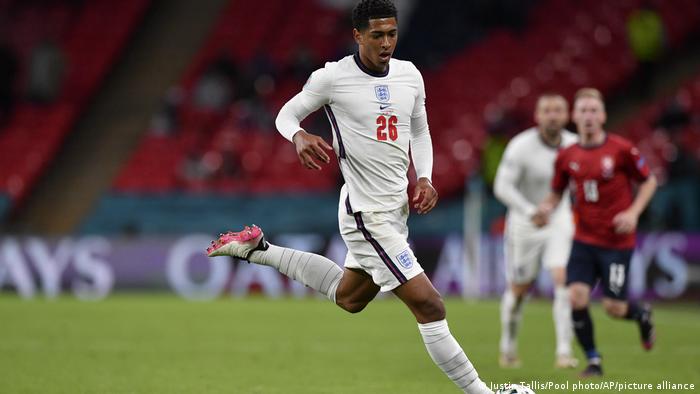 When patrolling the midfield at some of Europe's most imposing stadiums, and in front of a TV audience of millions, it looks like Bellingham was born to be there. You wouldn't think that he didn't actually fancy football that much as a kid.

"The chasing games, the fun games he absolutely loved. And to be fair he'd win every time," Phil Wooldridge, his first coach at junior level, said. "But, as soon as you actually put a football down and we played a match, no. He'd sit on the floor, he'd be picking the grass, he'd be running off, he was not interested whatsoever."

His talent was enough to get him in at Birmingham, though, and that, combined with his character and determination, have helped him become a player and person whom Dodds describes as "a shining example for the city of Birmingham."

Though Bellingham played just one season for the club, Birmingham retired his No. 22 shirt when he left for Germany. The move spoke not just to his ability but his humble, hardworking and affable character, which former teacher James Ayers says has always been there.

"We had a PE (physical education) lesson, and we were doing football," Ayers said. "Jude was on a team that wasn't as strong as one of the teams he was up against. He was up against some of his friends and some very competitive children. But Jude, being the sort of child he was, skipped past a couple of them with the ball, and then would make sure he would square the ball so that one of the girls in particular who wasn't finding football easy, would have the opportunity to score."

Dodds does remember one blemish on Bellingham's record. "He used to have the old Ronaldo haircut," he recalls. "He had a tuft of hair at the front and shaved the rest. He's had some bad haircuts."

Given the impact that Bellingham has made, Dortmund fans and Rose would certainly forgive him even that. But, like Jadon Sancho before him, Bellingham's decision to play his club football abroad perhaps still leaves him a little underappreciated in his homeland. Not by everyone though.

"In 40 or 50 years' time, he could be looked back on as one of the greatest ever to play for England," Wooldridge said.

It is highly unlikely that a man as levelheaded as Bellingham would look so far ahead. He will "just keep going." Dortmund will travel to Amsterdam to face Ajax on Tuesday. His importance to his team is amplified given Dortmund's current injury problems.

Not bad for a kid who didn't want to play football.

Bundesliga: 10 youngsters to watch this season

The Bundesliga possesses some of the most exciting young talents in world football. We‘ve picked out 10 to keep an eye on this season, from Borussia Dortmund's Erling Haaland to Borussia Mönchengladbach's Luca Netz.