Borussia Dortmund: It all depends on Marco Reus

Borussia Dortmund battled to a hard-earned victory against Cologne. Even if the victory was anything but comfortable, it proves the club are serious about winning the title - and that their hopes are tied to one player. 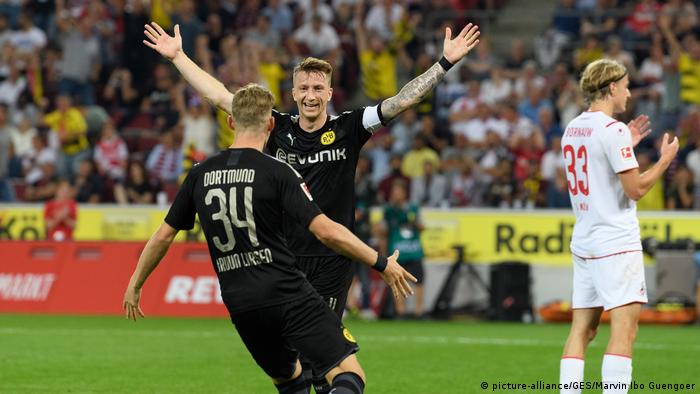 Even here, in a garishly lit corridor in the bowels of Cologne's stadium, Marco Reus tries to keep things in order. "Hold on a moment. One at a time. Who first?" the BVB captain asks a flock of reporters who have waited for him outside the changing rooms.

Everyone wanted to ask him about Borussia Dortmund's 3-1 win against Cologne. They wanted to hear his analysis, even though he wasn't at the centre of the action. Nevertheless, Reus remains the pivot of this BVB team - one that is hoping to dethrone Bayern Munich at the top of the Bundesliga.

Of course, it's far too early to talk about the title. The second game of the season offers a glimpse of what the rest of the season will bring, but one question hangs over the Bundesliga: Can  Dortmund really stop Bayern winning what would be their eighth title in a row?

Reus may and can do it all

A lot depends on what Marco Reus will do in the remaining 32 Bundesliga games. The Dortmund talisman plays a leading role under Lucien Favre, the coach who moulded him at the start of the decade when they were both at Gladbach.

Reus is the playmaker, the forward, the winger and, when he needs to be, the holding midfielder - Reus is everywhere, and can find his own spaces to exploit and tasks to complete. Favre trusts his football intelligence - and that was called upon in Cologne.

Right from the start, BVB are under pressure as Cologne start with a furiously high tempo and win tackles all over the pitch. Reus' first involvement doesn't come off, a one-two down the right with Jadon Sancho falling short because Reus lacks the pace to beat his man. With the ball gone, he jogs back. Even Reus needs a bit of time to get going in games. But he rolls up his sleeves, and urges his lethargic team onwards.

His free kick after 22 minutes is palmed away by Timo Horn - the only real chance for Dortmund in the first half. At the other end, Cologne take a deserved lead through Dominick Drexler. 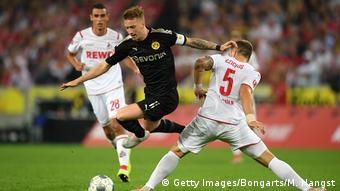 Marco Reus' fitness will be key for Dortmund again this season

Reus stays cool. "We knew we had to be patient, that Cologne wouldn't be able to keep up their tempo over the 90 minutes," he reveals post-match. "We can always go up a gear in the second half." And that's what his team do in the second half, even if they had to wait.

Sancho curls a beautiful strike into the far corner to equalize, before Achraf Hakimi heads Dortmund into the lead. Paco Alcacer taps in a third on the break making for a flattering, but important second win in a row for the title aspirants.

Reus impressed, not as a playmaker or as a finisher, but as a worker for the team. He recognized the need for the defensive part of the game during a passage of play where his team was wobbling. In the final passage of the game, he created space as Cologne's energy visibly dropped. Others shone, but Reus remained the starting point.

Can he find another level?

"We have to work hard for success," Reus says, running his hand through his freshly-washed hair. Perhaps he's keen to grab a hold of the expectations surrounding BVB. "It doesn't just come on its own. We're not where we want to be yet."

After 262 Bundesliga games, 117 goals and 75 assists, Reus knows what he's talking about. He also knows what he's missing: one big title. Four times he has finished a runner-up in the Bundesliga, and once in the Champions League.

Reus' career has reached a decisive moment. At 30 years old, he is one of the best German players of his generation. His value is estimated to be around the €50m mark and, although he's worth so much more than that to Dortmund, his career remains unfinished.

For a long time, he was susceptible to injuries, often finding himself unavailable at unfavorable moments - such as before the 2014 World Cup, a tournament Germany won without him. Since then, Reus has become more robust and can handle rough treatment from defenders.

Responsibility rests on his shoulders. If the assault on Bayern fails, questions will be asked of Reus. Until then, he should heed his own advise from tonight's game in Cologne: Be patient, keep working and find another gear.