Two powerful detonations have damaged the apartment of a senior police officer and a pharmacy owned by the family of Albania's interior minister. Prime Minister Edi Rama described the bombings as "terrorist acts." 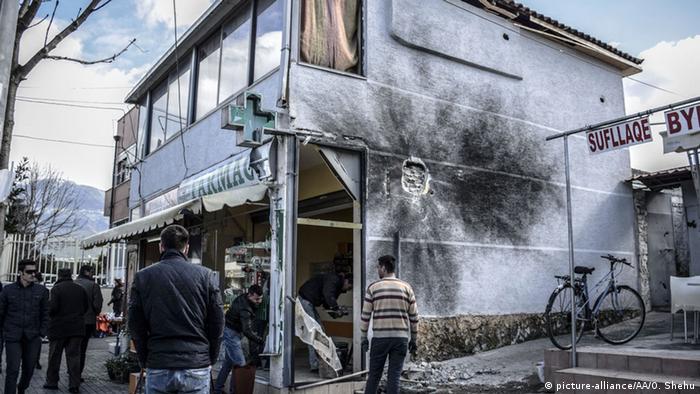 A pre-dawn bomb blast on Tuesday morning destroyed the drug store belonging to the father of Albanian Interior Minister Saimir Tahiri, according to police sources.

Minister Tahiri is at the helm of the government campaign against drug trafficking, electricity theft and other crimes.

The explosion occurred close by the main office of the national secret intelligence police, the Associated Press news agency reported.

The second blast targeted the apartment of a high-ranking police official only 25 minutes later.

Police say a third device was defused near a bus station in central Tirana after they received a warning telephone call.

No one was injured in the bombings, which caused major property damage.

On his Facebook page, Rama wrote that "the hands of the state would smother" whoever planted the bombs.

"Saimir Tahiri is at the forefront of the state's fight against crime and whoever ordered and executed the terror against his family must know it has given him and us all the more reason to live up to our duty," he wrote.

The prosecutors' office said in a separate statement that the prosecutors and the police "have started investigating crimes with terrorist intent."

Albania is still burdened by organized crime and corruption, and it is not unusual for criminals to use bombs as a warning or to assassinate targets. Police recently tracked down and arrested a professional killer who used explosives, as well as some members of the army who were selling dynamite.

The prime minister of Albania has visited a region of southwestern Serbia mainly populated by ethnic Albanians. This came a day after he and his counterpart in Belgrade clashed over Kosovo at a joint news conference. (11.11.2014)