Usain Bolt's triple treble means he must be considered the greatest Olympian of all time despite others winning more medals, writes DW's Mark Meadows. The threat of losing a 2008 medal should not diminish his glory. 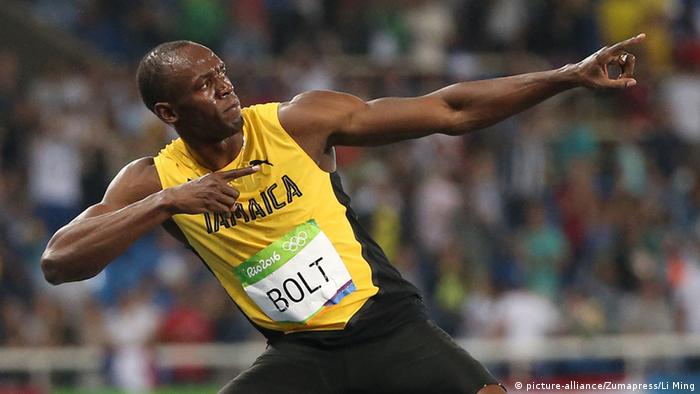 Usain Bolt will go down as the greatest Olympian ever even if his relay gold from Beijing 2008 ends up being stripped because of an alleged positive test by one of his former Jamaica teammates.

Michael Phelps has a record 23 gold medals and Bolt only has nine, but Phelps would be the first to admit that swimming golds are slightly easier to obtain given the flurry of distances and different strokes.

For Bolt to have captured a sprint triple treble - the 100 meters, 200 meters and 4x100 relay - in three consecutive Games is a quite incredible feat that will probably never be matched.

The fact he has done it at a time when athletics has been mired in doping and corruption scandals makes his achievements even more special. In a sense he has saved an entire sport from implosion, a showman not just an athlete who has made young children interested in running again.

Whether he ends up losing one of his nine golds through no fault of his own is a complicated tale. Widespread media reports say Nesta Carter, who ran one of the legs for Jamaica in 2008, could face disciplinary action over an alleged positive doping test for Methylhexanamin from the Beijing Games.

The potential issue is only coming to light now because the International Olympic Committee is retesting old blood samples from previous Games because of advanced testing techniques.

Nothing has been confirmed by the IOC, the Jamaican authorities or Carter himself, possibly because they are awaiting the tests of a B sample, but Bolt has not been shy discussing the issue.

"I don't think it will tarnish my legacy," Bolt said after the 4x100m triumph in Rio when asked about the Carter rumors. "I've proved over and over again that I've done it clean. It will be disappointing, but it's life. I have no control over that. I've worked hard every Olympics to prove I'm the greatest."

Olympic precedent means that if one member of a relay team fails a drugs test, the results of the entire team are erased.

It is difficult to see how the IOC could make a special case for Bolt should Carter's positive test be confirmed. But Bolt's avid fans back in Jamaica and around the world will try their hardest to make sure he can keep all nine golds.

But an actual piece of metal round your neck is not what really counts when people remember your Olympic exploits. What matters are the memories of seeing one of the Olympics' greatest ambassadors fooling around, exciting the crowd and then blowing away the opposition with stunningly effortless running - nine times in a row.

Even if Carter had been replaced by a cart horse in 2008, Bolt would still probably have inspired a Jamaican relay victory.

A Lightning Bolt came down and struck track and field exactly when it needed him most. He is adamant that Rio was his last Olympics and that is immensely sad, but just feel lucky to have been alive at the same time as "the greatest."