The Aymara language in the Andes is at risk of dying out. But Ruben Hilare and his team are using Facebook and Wikipedia to make sure the indigenous language has a future in the digital world. 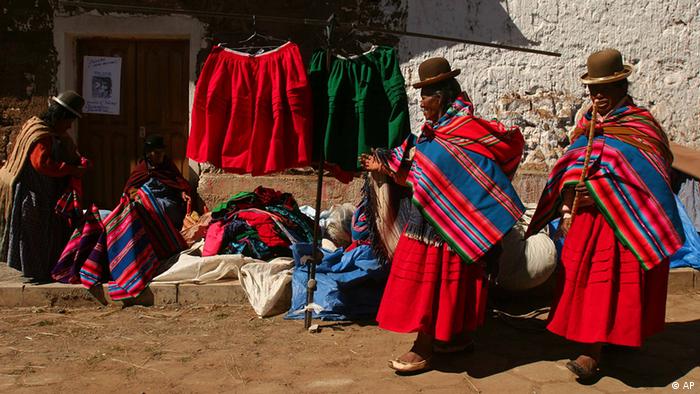 The indigenous Aymara language dates back to at least the 12th century and is still spoken by three million people living in and around the Andes. But the language is in danger of becoming extinct as people in the region decide to speak Spanish instead.

Thirty-year-old Ruben Hilare from El Alto, Bolivia is dedicated to preserving his native language - by using modern technology. For the past three years, he has led Jaqi Aru, a group that meets to speak Aymara and expand its presence on the Internet.

Jaqi Aru group members - the name is Aymaran for "human language" - write stories and translate articles for the Global Voices blog. They also translate words for the blogging site Wordpress and Internet browser Firefox. Hilare is in charge of updating the Aymara version of Wikipedia, which now boasts over 2,000 entries.

"The first time we found Wikipedia, we found it was a unique place to promote our language because it's open source. Anyone can edit it and others can check it. It's just wonderful," said Hilare. 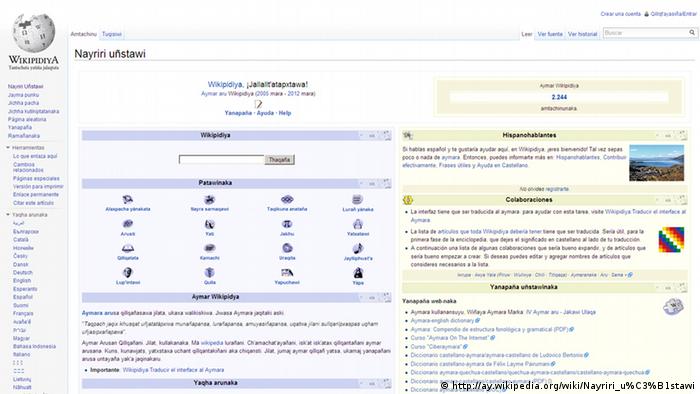 Jaqi Aru have translated over 2,000 Wikipedia pages into Aymaran

Hilare and other Jaqi Aru members speak Aymara amongst themselves and with family and friends. Most of them live in El Alto, which grew from a La Paz suburb to a city with a million inhabitants within a couple of decades. Many of El Alto's residents speak Aymara.

However, the language that has been spoken in this region since even before the Incas' rule is in need of some new vocabulary.

“Aymara doesn't have a lot of new words," explained Hilare. "We don't have a word to say 'reporter;' we don't have words to say many things.”

With that being the case, what's the Aymara word for Internet?

“It's only recently been created. Many people say 'pechto' because 'pechto' means that there are many things at the same time and that word has been adopted," according to Hilare. "Only when we use our language can we create new words and restore our language."

Indigenous languages were stigmatized for a long time in Bolivia. The Latin American country gained its independence from Spain in 1825, but kept Spanish as the only official language for years. Nevertheless, it was not until 1976 that Spanish became the majority language for the first time. With improved education, increasing numbers of Bolivians became bilingual in Spanish and their native language, of which there are more than 30 across the country.

Monolingual native Aymara speakers are in decline. Historian Herbert Klein wrote in 1950 that 664,000 Bolivians spoke only Aymara. By 1976, that number had been halved. A decade ago, only 263,000 Aymara-only speakers were left in Bolivia. For many Aymara speakers, learning Spanish continues to mean dropping their native language.

But recent political developments have been promising for Aymara. Since 2006, Bolivia's government has been led by its first indigenous president, the Aymara Evo Morales. He has improved the rights of indigenous inhabitants by introducing a new constitution and requiring that public officials speak at least one native language.

Cochabamba-based blogger Eddie Avila believes the internet can encourage a new generation of speakers of indigenous languages. “I think if people see other people who aren't embarrassed or who are proud to use their mother tongue on websites or on the Internet, that can be a really strong motivator to learn or maintain their language. I think it's a very hopeful thing, technology as a way to encourage people to retain their identity and their culture.” 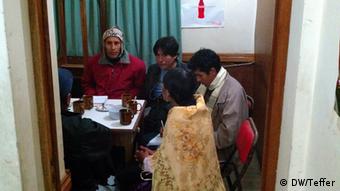 The group meets reguarly to discuss the project

Jaqi Aru meets regularly with the group's members to discuss their project's progress. Team member Elias Quispe, 29, has been in touch with Facebook to see if they would be interested in an Aymara version of the popular social networking site.

“We are going to use the Facebook platform in Aymara. That's my dream,” he said.

To achieve this dream, the group is facing some challenges. Bolivia's Internet connections are amongst the slowest in the hemisphere. But Ruben Hilare isn't letting that stand in the way of his vision.

“This project is kind of preparing the land for the next generation," he said. "When we were students, we used to go to the Internet in order to search information in Aymara. You couldn't find anything. So now what Jaqi Aru is doing in this web 2.0 era is to make information available, and to document it. It's another way to show the next generation and say go to this link and you can see what happened in 2009 or in 2010 - in your language.”

When Evo Morales became Bolivia's first indigenous president, he spoke of 'vivir bien,' a phrase meaning 'good life' or 'to live well.' But can the concept be reconciled with dependence on the oil and gas industries? (31.05.2012)

Indigenous activists in Bolivia and other Latin American countries who take to the streets to protest the exploitation of their ancestral homelands face repressive measures and charges of terrorism. (29.04.2012)

The world's indigenous peoples are often marginalized and under-represented politically and economically, their land and livelihood threatened. What does the future hold for them in the globalized world? (16.07.2012)

Check out the Aymara version of Wikipedia

Listen to the radio report by Peter Teffer