Activists of the "Blockupy" movement have clashed with the police in Frankfurt. The demonstration was organized to protest the inauguration of the European Central Bank's new office. 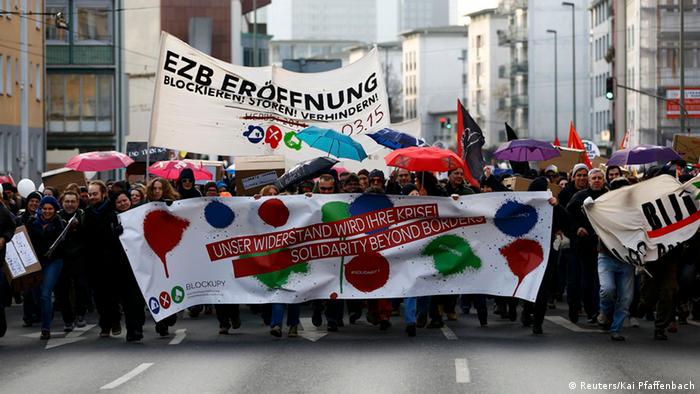 Nearly 2,000 protesters climbed over barbed wires and threw stones and bags full of colored water at the European Central Bank's (ECB) new building on Saturday, Frankfurt's police said in a statement. They also attacked a police officer, after which the cops used pepper spray to disperse the crowd. There were no reports of anyone getting hurt.

Earlier on Saturday, the participants gathered at the St. Paul's church, chanting the slogan "March to the new ECB. We help with the move." The protesters then walked to the ECB's new office, which has cost nearly 1.3 billion euros.

The European bank's building, scheduled to be inaugurated in March next year, faced severe criticism from politicians like Katja Kipping of the leftist "Die Linke" party who disapproved of the fact that the ECB handed out money to southern European countries only if they reduced their social spending.

The Saturday protest was a part of a four-day festival called "Talk, dance, act" in which participants discuss steps to be taken against EU's policies that, according to critics, are causing widespread impoverishment.

"Blockupy" is a network of left-leaning organizations which are critical of the ECB's economic reforms in the wake of the 2008 financial crisis.

Decentralized protests instead of large rallies - this is Blockupy's modus operandi. At a meeting in Frankfurt, the critics of capitalism are planning new demonstrations against the EU's strict austerity measures. (23.11.2013)

Police have stopped many protestors from reaching the ECB, saying some participants were disturbing the peace. Thousands are occupying Germany's financial capital, Frankfurt am Main, to protest EU austerity policies. (01.06.2013)

Thousands have converged on Frankfurt to shut down key financial institutions this week. Their reasons may vary, including frustration with banks and the EU, but Europeans are uniting around the Blockupy movement. (31.05.2013)