As Indonesia steps up efforts to extinguish forest fires that have choked the region in thick haze, criticism from neighboring countries is mounting. Environmental lawyers accuse Jakarta of breaching international law. 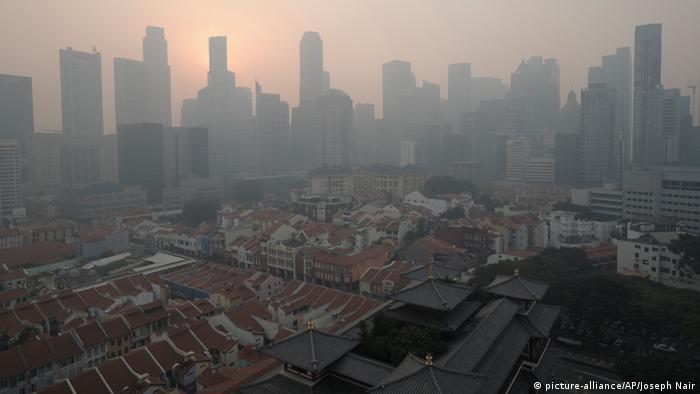 As images of the thick haze shrouding Singapore were beamed around the world last week, a diplomatic tussle got underway between the leaders of Singapore and Indonesia, where hundreds of illegal forest fires continue to rage.

Singapore demanded "definitive action" from Jakarta to put out the fires, only to be chided for its reaction to the haze. The Indonesian Coordinating Minister for People's Welfare Agung Laksono claimed the small island city-state had behaved "like a child" as it bore the brunt of the smog.

The Pollutant Standards Index (PSI) crossed the 400 mark on Friday (June 21, 2013) a record reading that is deemed "hazardous" to human health. 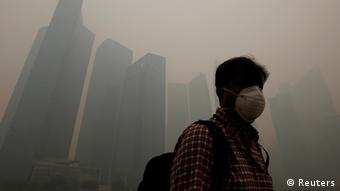 The PSI crossed the 400 mark, a record reading

Apart from the health implications, Singapore's reputation as a major business hub and one of the world's largest offshore financial centers is at stake. If the haze continues, as expected over the next few weeks, it could put off international investors.

But the haze issue across Southeast Asia is nothing new. Since 1997, air quality in Singapore and Malaysia has regularly suffered, due to Indonesian plantation fires that occur during the June to September dry season. The problem was even addressed at the regional grouping ASEAN a decade ago.

The 2002 ASEAN Agreement on Transboundary Haze Pollution was meant to ensure nations prevented, monitored and tried to combat deforestation activities. But observers say the way the pact was negotiated effectively "watered down" Indonesia's commitments. Despite being weakened, Jakarta has still not ratified the agreement.

"As the principal cause of the fires and smoke - the elephant in the room if you like - Indonesia's staying out completely undermines the agreement," said law professor Alan Khee-Jin Tan from the National University of Singapore. "Jakarta's refusal is linked to the view that if Indonesia were to accept it, it would constitute an admission of guilt for the fires," he stressed.

'Indonesia has little to fear'

Tan, who sits on the Executive Committee of the Asia Pacific Centre for Environmental Law, told DW that the agreement is largely technical, with few onerous demands on states. "It has nothing, for instance, that would make Indonesia liable to pay compensation to injured states," he added. "So in that sense, there is little for Indonesia to fear."

Other experts think Singapore and Malaysia could have done more to pull their weight in negotiations over the agreement, especially as they are the main victims of the haze.

Jakarta says that despite not ratifying the agreement, it is still meeting its obligations under the treaty, a claim one environmental group described as "highly superficial and lacking in regional accountability."

Malaysia has declared a state of emergency in two southern districts as record levels of smoke blow over from land-clearing fires in Indonesia. Air pollution in Malaysia has been rated "unhealthy." (23.06.2013)

Record smog in Singapore has prompted emergency talks with Indonesia on how to extinguish fires on the island of Sumatra. Smoke plumes drifting across the sea have also forced school closures in Malaysia. (21.06.2013)

Breathless in the megacity

Megacities are not only the world's largest metropolitan areas but also some of the most polluted. Millions die every year due to air contamination, mainly in emerging nations. Some cities have come up with solutions. (10.06.2013)

Bogs and marshlands, which store huge amounts of carbon dioxide, are shrinking around the world at an alarming rate. Now some countries are doing a rethink and making efforts to restore the wetlands. (20.07.2010)

"Ratification would essentially mean that a country acknowledges the terms and conditions of the treaty, abides by them and is fully aware of the implications if it contravenes the terms of the treaty," said Jose Raymond, Executive Director of the Singapore Environment Council.

While the Indonesian government may not face compensation claims, local agricultural companies might.

Ironically, some of the firms allegedly responsible for the illegal fires are either headquartered in Singapore or are owned by Singaporeans. On Sunday and Monday, the thick smog moved northwards towards the Malaysian capital Kuala Lumpur compelling a more assertive response from the Malaysian government.

That in turn led to accusations from Indonesia that eight Malaysian firms were contributing to the pollution. Both Singapore and Malaysia have promised to go after any local companies responsible for the fires where farmers use traditional "slash and burn" methods to prepare large areas of land for plantation.

"We're fully supportive of the government's intentions to name and shame the companies involved. In fact, it was us who made the call to name and shame. Moreover, guilty companies should be made to face severe financial penalties and redress the environmental damage caused,” Jose Raymond, the SEC's Executive Director told DW.

The NGO thinks that while intergovernmental efforts should continue, ministers and environmental groups should engage the businesses affected and those who own large plots of farmland in Indonesia. "The real impact will be made when we work with the landowners, farmers and even provincial governments. They are the people who will make the difference over the long term. But it will take time and investment," said Raymond.

While some experts say Indonesia's laws against burnings are effective and the threat of substantial penalties is in place, many think corruption is preventing firm action from being taken.

Observers say local politicians allow deforestation to continue at an increasing rate for their own gains. Environment lawyer Tan said he had no doubt that by not taking the necessary steps against illegal fires, Indonesia had breached international law.

He said "customary international law," not necessarily found in treaties, still obliged states to make commitments to one another about activities in each others' territories. "But the reality is that it cannot be compelled to appear before an international court or tribunal without its consent - such is the nature of international law," he said. Singapore and Malaysia, he added, could go after their own companies; but without Indonesia going against all the other plantations, there would be little overall effect. 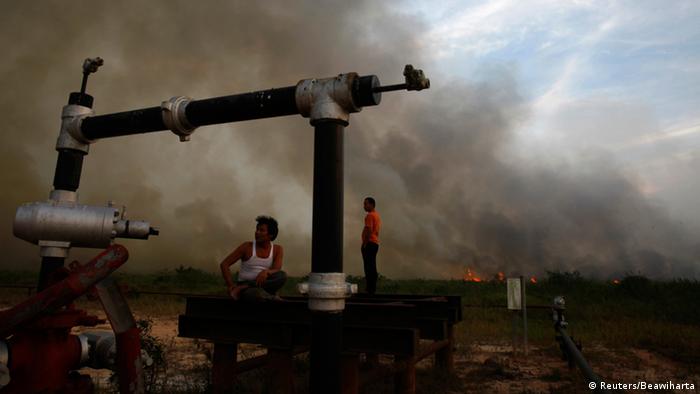 Indonesia's Foreign Affairs Minister Marty Natalegawa said the government had been dealing with the problem for years and claimed that "improvements have been made." Officials say they have been educating locals about alternatives to 'slash and burn' methods and that large companies subcontract a lot of the work out to small impoverished farmers.

Cloud seeding operations - to chemically induce rainfall - were postponed on Monday due to a lack of cloud cover in the affected areas. However, water bombing operations continued to quell several hotspots in Riau province.