Billions lost to cigarette smuggling | Europe | News and current affairs from around the continent | DW | 05.06.2013

The EU is chasing cigarette smuggling gangs, whose activities deprive member states of 10 billion euros a year. Now the EU Commission wants to lay dry the source of smuggling. Its focus is on big tobacco - and Russia. 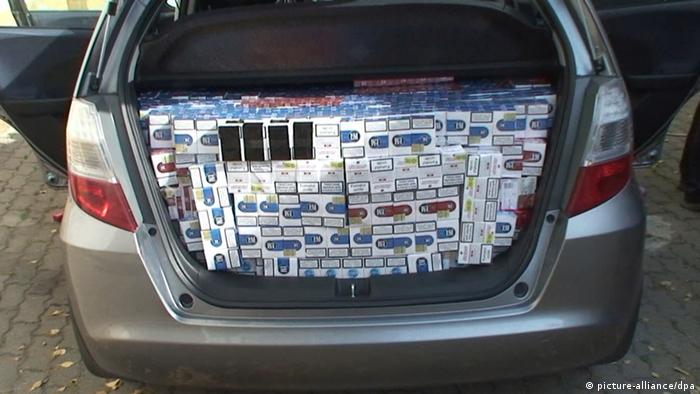 Customs investigators had been observing the traffickers for some time. They struck when they had enough evidence.

More than 10,000 packs of cigarettes were seized. They were worth approximately 50,000 euros ($66,000). The delivery was meant for Saxony and Thuringia, two states in eastern Germany.

That was a big haul, says Bianca Richter at the Customs Investigation Office Dresden. Or rather, it was a lot of small hauls. In the past, smugglers transported cigarettes in large trucks or cargo containers. Now they bring them in ordinary cars in many small loads.

"They even take the train," Richter told DW. "That means they're smuggling part of the delivery in suitcases."

In the recent seize, the cigarettes were from Russia, Ukraine and Belarus. The criminal gang distributing them would have caused a loss of 15 million euros in taxes to European countries.

EU member states are believed to be losing 10 billion euros each year in tax revenues lost through cigarette smuggling. Some put the number as high as 17 billion.

Either way, the EU Commission intends to introduce a new strategy. Beyond existing cooperation between police in the different EU member states, the Commission wants to involve producers and countries of origin. 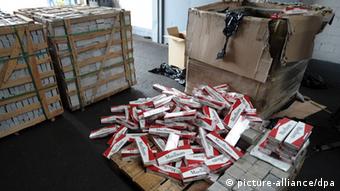 That's partly because cigarette companies lose sales through smuggled cigarettes. But they often benefit financially as well. Brand-name cigarettes smuggled into Europe are produced in factories owned by large European and US tobacco corporations. They are then routed through Asia and eastern Europe.

Over the last three years, the EU Commission has been increasing pressure on producers. In Brussels, the EU signed an agreement with the four largest corporations that together cover 80 percent of the world market. Under the terms of that agreement, they now have to document exactly how many cigarettes they deliver - and where they deliver them.

Austin Rowan of the European Anti-Fraud Office OLAF praises the treaty as an important first step that needs to be followed by a second one that incorporates countries beyond the EU's borders.

"Other producers outside the EU sell huge quantities of cigarettes to markets where they know that not even a quarter or a tenth of that amount can be consumed," he told DW. The producers are aware, Rowan says, that excess cigarettes sold to these countries - many of them very small - are then smuggled out to the European Union. 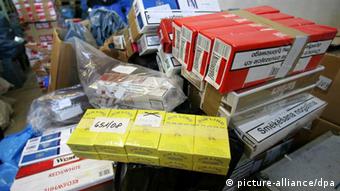 Jin Ling cigarettes are popular in Berlin, even though they aren't legally available in Germany

The problem at the core of the illegal cigarette trade is the large price difference. A truck carrying 100,000 packs of cigarettes is transporting 30,000 euros worth of goods in Belarus. In Poland, that value has jumped to 100,000 euros. In Germany, the cigarettes are worth 250,000 euros. And if the truck continues on to England or Scandinavia, the value of the cigarettes can rise to half-a-million euros.

With such margins, traffickers today not only come up with new distribution channels continually, they also refine their business model. Twenty years ago, they largely smuggled brand-name cigarettes from low-price to high-price countries. Then they began producing counterfeit brand cigarettes. Now, they also deal in so-called "cheap white brands," such as Jin Ling cigarettes from Kaliningrad.

Legal products for the illegal market

In other words, the cigarettes are specifically produced for smuggling - and very successfully so. In some parts of Berlin, Jin Ling is the most popular brand. The demand is so high, according to Schmitz, that the brand itself, which was produced for the black market, is now itself being counterfeited. Its popularity has also drawn the EU's attention. 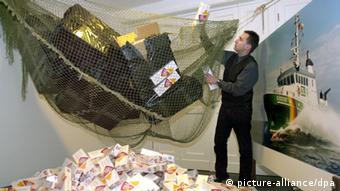 The EU Commission wants countries such as Russia to sign trade agreements that would improve controls of manufacturers. As that goal might be difficult to achieve, ports and free trade zones within the EU and elsewhere will be monitored more thoroughly.

"Free trade zones throughout the world are used as turnstiles for cigarette smuggling, particularly on to the EU market," says anti-fraud officer Rowan.

But for customs investigator Schmitz, the battle against cigarette smuggling isn't just a fight against tax fraud. Many of the cigarettes, and especially those from Asia, are dangerous to one's health.

"The tobacco often comes from regions in which they still use pesticides and herbicides that were banned long ago in Europe," he said.

Inspectors have also found shredded CDs, mouse droppings and even asbestos fibers in the cigarettes.

German tobacco sales decrease as smuggling is up

The gradual increase in tobacco tax in Germany has seen domestic cigarette and cigar sales decreasing further over the past couple of months. However, that does not mean people are smoking less in the country. (22.04.2013)