Germany general manager Oliver Bierhoff told DW he can't rule out a return to the national team for Thomas Müller. But he insisted the focus was still on youth, adding that the Euros delay could work in Germany's favor.

Developing young talent continues to be key for Germany as they begin to look to Euro 2021, but there could yet be a way back for Thomas Müller, according to Germany's general manager Oliver Bierhoff.

The 52-year-old told DW that he was "happy" with the resurgence in Müller's form under Bayern Munich coach Hansi Flick that helped the Bavarians to the treble, adding that nothing can ever be entirely ruled out.

"You can never say no in football but at this moment we want to give young players a chance, we want to continue the way we started," he said in a video call. "We've already had good results and good signs in the last year when we played and, at the moment, we would like to continue like that.

"The good thing is there are no human problems between the coach [Joachim Löw] and Thomas Müller, so I think whenever the coach thinks that it's neccessary, he would call him."

Müller was axed from the Germany setup, along with fellow World Cup winners Jerome Boateng and Mats Hummels, after Germany's disastrous World Cup 2018 campaign. But there has been widespread clamor in Germany for Müller's return, as Bierhoff acknowleged when he said he was asked about the forward "every month." 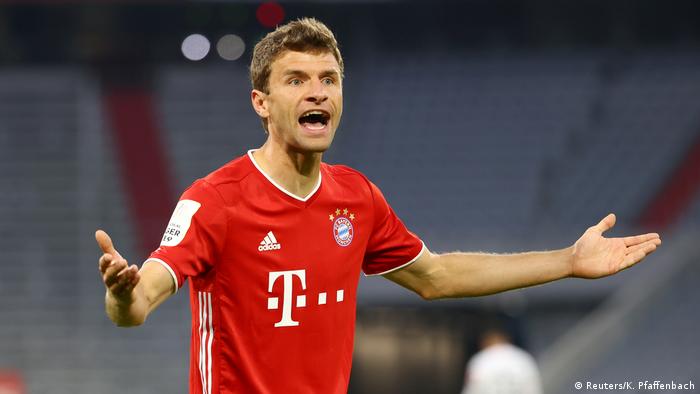 Though Bierhoff, who won Euro 96 as a player, refused to rule out a return, he was keen to emphasize that Löw's decision to freshen up his side after Russia was one he stuck by. He said the current crop were learning fast but lacked some of the knowhow of his winning side from 24 years ago.

"Experience wise in 96, we were a little bit better staffed, but now we have much more talented technical players," he said. "So we still have hope. But I think this young team has to grow. They have to get experience and they have find their way together how to compete on the highest level."

The next stage of that development starts in the Nations League, with fixtures against Spain on Thursday and Switzerland on September 6. Bierhoff said he, Löw and the rest of the Germany setup were keen to stay in touch with fans digitally to make up for their absence in stadiums and continue to implement a more aggressive, modern style of football.

Though he acknowledged the difficulty of the coronavirus-induced break from international football, he also said more preparation time may work in Germany's favor.

Delay could be decisive

"I would say it is by no means a disadvantage. After all, the other national teams have to deal with it too. And perhaps it will help us now that our young players can get another year of experience with their clubs in the Champions League." 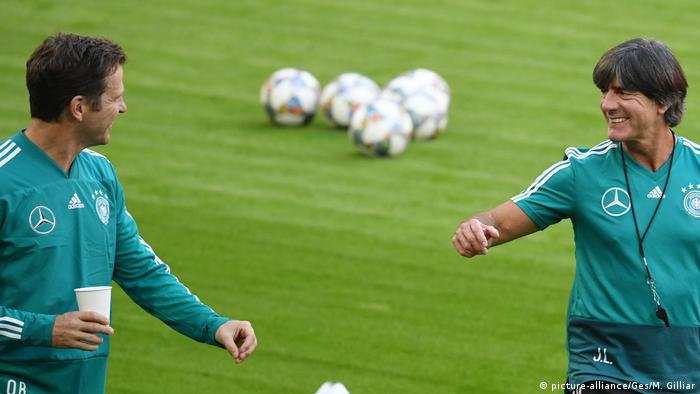 Oliver Bierhoff and Joachim Löw have a close working relationship

Most of the German players involved in the later stages of the Champions League have been allowed to rest for the upcoming Nations League matches, with Leon Goretzka, Joshua Kimmich, Manuel Neuer and Serge Gnabry among the absentees. Those four, along with Niklas Süle and Leroy Sane, who both make the squad as they continue their returns from injuries, form a strong Bayern core in the new-look Germany side, and Bierhoff thinks this too could be beneficial.

But it wasn't just German players dominating those final stages in Lisbon, with three of the four semifinal coaches having come through the DFB (German FA) system.

The same goes for the national team who Bierhoff believes must now put 2018 "behind them" and focus on the future. While the signs of progress are encouraging at all levels of the national team, Bierhoff knows that when it comes down to it, German national teams are judged in tournaments. Müller or no Müller, they'll need to perform in Euro 2021.

The interview was carried out by Herbert Schalling and Mark Meadows.