US President Joe Biden has called on Congress to take action to curb gun violence, after a shooting in Indiana left eight people dead. Police have released details of the alleged shooter. 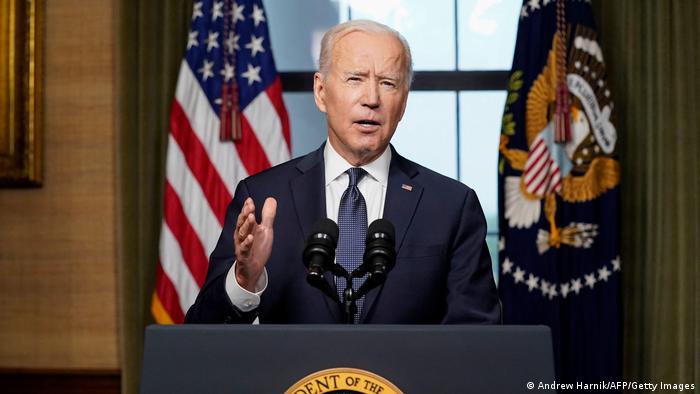 President Joe Biden said mass shootings should not be a normal occurrence in the United States.

US President Joe Biden on Friday reacted to a shooting in Indianapolis that killed eight people and left several wounded, calling gun violence an "epidemic" in the United States. He ordered all flags be flown half-staff, a symbol of mourning and respect for the victims.

"Last night and into the morning in Indianapolis, yet again families had to wait to hear word about the fate of their loved ones," Biden said in a statement. "What a cruel wait and fate that has become too normal and happens every day somewhere in our nation."

"Gun violence is an epidemic in America. But we should not accept it. We must act," Biden continued. He cited recent actions by his administration to curb gun violence and called on Congress to enact "commonsense" policies such as universal background checks and a ban on "weapons of war."

Earlier in the day, Vice President Kamala Harris reacted to the shooting, saying there is "no question this violence must end."

Indianapolis police: 'This is a sight that no one should ever have to see'

What do we know about the shooting?

The gunman who carried out the shooting at a FedEx Ground facility late Thursday killed himself after the massacre. Law enforcement officials have identified the assailant as a 19-year-old man but are still looking for a motive behind the shooting.

Police chief Randal Taylor said there are a "significant" number of Sikh employees at the FedEx facility. The suspect was also a former employee at the facility, according to a FedEx spokesperson.

The Sikh Coalition, which said "that at least four of those killed" were members of the Indianapolis Sikh community, said that it hoped "that authorities will conduct a full investigation — including the possibility of bias as a factor."

Authorities have conducted a search of a home tied to the suspect and have seized evidence such as laptop computers and other electronic media. The FBI said it had previously questioned the suspect last year based on items found in his bedroom, after his mother called police to tell them he might commit "suicide by cop."

The Indianapolis shooting is the latest in a series of gun massacres in the United States. Four people were killed in an office building in California last month, with 10 people having died in a shooting at a Boulder, Colorado supermarket on March 22.

Why is gun control so controversial in the United States?

Although Democrats such as Joe Biden promote some gun control measures to curb the violence, conservative Republicans are staunchly opposed to the idea, as they believe it infringes upon the constitutional right to bear arms.

In December 2012, former President Barack Obama called for an assault weapons ban after a shooting at an elementary school in Connecticut left 27 people dead, including 20 children. Yet, Obama's gun control measures failed to win the 60 votes needed in the Senate in 2013, due to stiff opposition from Republicans.