Biden: Russia's actions in Crimea 'nothing more than a land grab'

The US vice president has condemned Russia's actions in Ukraine, reaffirming US commitment to NATO. Chancellor Angela Merkel and US President Obama agreed the incorporation of Crimea was "unacceptable." 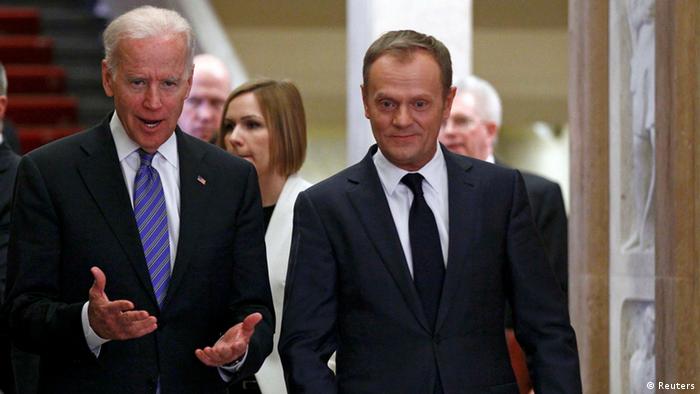 "It's more important today than ever that friends stand with one another and be unequivocal about it," Biden said.

Biden's two-day visit to the region was seen as a warning to Moscow as it stands defiant against Western outcry over the alleged movement of Russian troops into Crimea and the region's subsequent secession vote.

On Sunday, the Black Sea peninsula voted in a referendum to secede from Ukraine in favor of joining the Russian Federation.

"The world has seen through Russia's actions and has rejected the flawed logic behind those actions," Biden said, and warned of more possible sanctions.

Biden branded the move "nothing more than a land grab," citing the UN Security Council's 13-2 condemnation of Crimea's secession vote. The press conference followed a meeting between the two leaders.

For his part, Russian President Vladimir Putin has described the inclusion of Crimea into the Federation an act that reversed a historical injustice. In 1954, Russia transferred the region to Ukraine in a closed-door decision.

Putin contends that the referendum in Crimea was legal.

The US vice president's visit with Polish Prime Minister Tusk preceded scheduled visits with the Lithuanian and Latvian presidents. The two-day meetings are to serve as a reminder to those nations that the US stands ready to fulfill any military commitments to the region as needed.

Collective self-defense was the "bedrock" of their alliances under Article 5 of the NATO treaty, Biden said, adding that he hoped NATO would emerge from this crisis "strong and more unified than ever."

Washington had increased the number of F-15 and F-16 fighter jets already scheduled for deployment to Polish air bases to 10 and 12, respectively, he said.

The US vice president and Polish prime minister also discussed Washington's assistance to Ukraine, including a $1 billion (717.8-million-euro) loan, and ways to decrease dependency on foreign oil and natural gas. US President Barack Obama is due to travel to Europe next week for further talks.

Russia is a major supplier of both to Europe, particularly to Germany which receives roughly 40 percent of its natural gas from the eastern European giant.

Both the EU and US on Monday agreed sanctions against politicians and officials from Russia and Ukraine who were deemed to have played a part in the lead up to the absorbing of Crimea into Russia.

Chancellor Angela Merkel spoke to Obama by telephone on Tuesday, with both agreeing on the need for close cooperation. The leaders agreed that: "The unilateral declaration of independence by Crimea and the beginning of its incorporation into the Russian Federation today are an unacceptable blow to the territorial integrity of Ukraine," said Merkel's spokesman Steffen Seibert.

"The chancellor and president regard the targeted measures agreed by the EU and US against individuals as correct in this situation."

Polish Prime Minister Tusk recently raised concerns over Berlin's willingness to take a tougher line against Moscow given its dependency on the major energy supplier.

Shortly after Biden addressed reporters in Warsaw, US President Obama invited leaders of the G-7 and European Union to meet about the crisis in Ukraine, according to the White House.