Best of Bundesliga: Aubameyang suspended, Cologne on a roll, James steps up

The Bundesliga returned in a haze of transfer rumor, with the two main protagonists, Naby Keita and Pierre-Emerick Aubameyang, offering a stark contrast. A debutant shone for Cologne and James Rodriguez caught the eye. 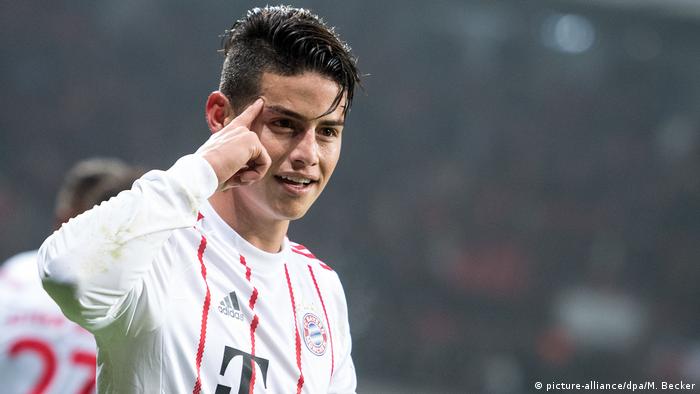 - James Rodriguez produced a stand-out display for Bayern Munich as the champions won 3-1 away at Bayer Leverkusen on Friday night. The Colombian set up Franck Ribéry with a precise cross-field ball for Bayern's second goal before killing off the game with a pin-point free-kick in injury time. Ribery's goal means he's the first foreigner to score in 11 Bundesliga seasons for Bayern.

- Despite their loss, Bayer Leverkusen remain the only side to have scored in every league game this term, with Kevin Volland's strike making him the highest scoring German in the Bundesliga, with 10 goals.

- Seemingly doomed Cologne made it two Bundesliga wins from two after debutant Simon Terodde scored a derby day winner in the fifth minute of injury time. The Billy Goats are now eight points from safety.

- After a 4-4 draw against Leverkusen to round off 2017, Hannover were back among the goals in 2018 as they came from behind to beat Mainz. Niclas Füllkrug stole the headlines with a perfect hat-trick (header, right foot, left foot) to give Hannover a dramatic 3-2 win and solidify their position in mid-table.

- Borussia Dortmund striker Pierre-Emerick Aubameyang, a target for Chinese and English clubs, was omitted from a matchday squad for the third time in his Dortmund career, and the second this season, after missing an important team meeting ahead of Dortmund's home game against Wolfsburg. His side struggled to a 0-0 draw in his absence.

- Naby Keita and RB Leipzig put the transfer speculation to bed this weekend with strong statements of intent both on and off the pitch.On Saturday, the Guinean midfielder produced a performance more reminiscent of last season and capped it off with the opening goal as the Red Bull side beat Schalke 3-1 to go second overnight. Then on Sunday, sporting director Ralf Rangnick confirmed that, despite renewed interest from Liverpool, Keita would be going nowhere until the summer. That's that, then.

"I support it. It was a logical decision. There are rules which apply to every player regardless of how many goals he scores or prevents." Roman Bürki on Dortmund's suspension of Aubameyang.

"Team spirit is very important to us. We had an important meeting and he missed it. If he's not focused, there have to be consequences." Peter Stöger on the same subject.

"I can't really live with this result because we're not seventh – we're 16th. We want to win every game and we had the chance to do so today" – Werder Bremen coach Florian Kohfeldt saw a missed opportunity against Hoffenheim. 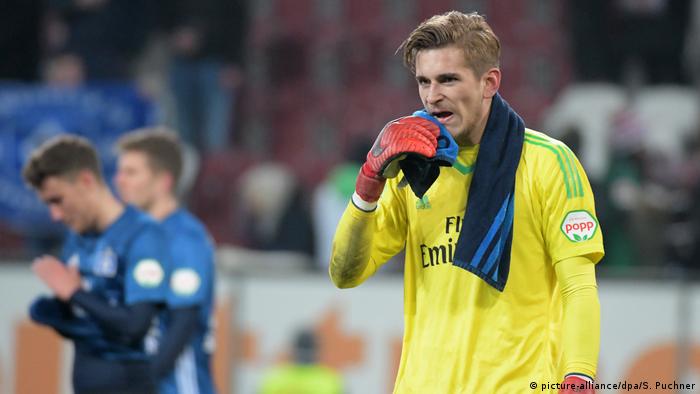 "27 points is great, but we're not done yet. You don't see Bayern celebrating the Bundesliga title, even though they have a greater lead ahead of second place than we do of the relegation spots." Augsburg's Daniel Baier as his side moved to within two points of the Champions League places with a win over Hamburg.

"It's disappointing. Last season, they used to sing a song about me, so it feels different this season. But that's how it is, we have to accept it" – hat-trick hero Niclas Füllkrug isn't ecstatic about the Hannover fans' atmosphere boycott ...

"Our football must not be lost. The fans are football and, as a player, I support the protest. What has happened in England and other countries shouldn't be allowed to happen here. The fans have been totally forgotten." ... but former Dortmund player Kevin Großkreutz supports the BVB fans' Monday night match boycott.

"Derby win, three points and a flag. What more could you want?" Former Cologne striker and local hero Lukas Podolski with a cheeky message for Borussia Mönchengladbach fans after Cologne's derby win. See Bizarre Bundesliga below ...

- Borussia Dortmund winger Christian Pulisic missed his team's game against Wolfsburg with a muscle strain. Coach Peter Stöger said he should be fit for Dortmund's trip to Hertha Berlin next Friday.

- Marco Russ was removed in the second half of Cologne's win and appears to have suffered a foot injury.

- One group of Bayern Munich supporters had their party plans busted after their team's 3-1 win over Bayer Leverkusen, when police discovered 300 grams of cannabis in their fan bus. The discovery was made after sniffer dogs caught a suspicious whiff coming from the bus while the fans were inside the ground. 55 members of the "Schickeria" ultra group had their details taken upon leaving the stadium.

- Not only were Cologne fans ecstatic at their last-minute derby win over Borussia Mönchengladbach, they were able to celebrate a mini-victory over their rivals off the pitch too. At half-time during the Rhine Derby, a Cologne ultra disguised as a steward managed to steal a Gladbach flag from the front of the away end and sprint off across the pitch - a considerable coup in ultra circles. Furious Gladbach ultras scaled the fence and tried to give chase but were forced back into their block by police while their Cologne rivals mocked them by waving the stolen flag.