The opportunities for minority and low-income-family students have significantly improved since 2002, a new report shows. But German schools are still far from being a level playing field. 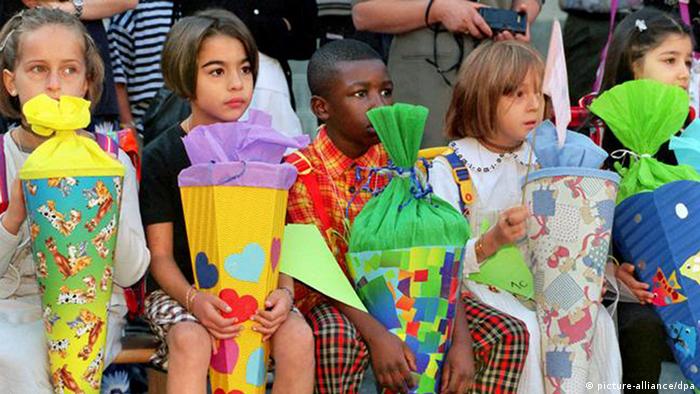 According to a new report from the Bertelsmann Foundation, fewer students are leaving school without a degree than in 2002. More students are qualifying for university and finishing school with the so-called "Abitur" - the Latin expression for "one who is going to go away" - which is used as the name for the university-preparatory school leaving qualification.

However, students without a German passport and from low-income families are still much less likely to get an "Abitur" or go on to get a degree.

The percentage of all students leaving school without a certificate dropped from 9.2 percent in 2002 to 5.8 percent in 2014.

Over the same period, for students without a German passport, the percentage leaving without a certificate dropped from 16.7 percent to 12.1 percent.

Germany offers several different types of secondary schools. After four to six years in grade school, children go to schools with different learning levels: either on a path to university, or not. Comprehensive schools (Gesamtschulen) which provide all learning levels are rare.

Every year since 2012, the Bertelsmann Foundation has produced an equal opportunities breakdown on German schools in cooperation with Dortmund Technical University and Friedrich Schiller University Jena. The report tracks yearly developments based on official state statistics.

In line with previous findings, this year's report showed that the inclusion of special-needs students into regular instead of special schools has increased.

The number of so-called "all-day schools"which offer classes, activities and tutor classes from roughly 8 a.m. to 5 p.m. has increased significantly in recent years from nearly 10 percent in 2002 to 37.3 percent in 2014. The report's authors suggest these schools are more likely to give opportunities to all students more equally as teachers can support students from lower-income families, or those unfamiliar with German language or culture.

Opportunities for disadvantaged students varied widely depending on where they lived, the report found. In Brandenburg, just 4 percent of students left school without a degree. In Saxony, that number was 27 percent. German educational policy is primarily determined by the sixteen states, rather than the federal government.

The Bertelsmann Foundation is the largest private, non-profit foundation in Germany, created in 1977 by Reinhard Mohn, who turned the publisher Bertelsmann into the sixth-largest media conglomerate in the world. Companies within the group include RTL and Penguin Random House.