Bernie Sanders rips into Trump in Berlin | Germany| News and in-depth reporting from Berlin and beyond | DW | 31.05.2017

The German capital felt the "Bern" as the Democrat excoriated the current US president in a speech to university students. The iconoclastic senator repeatedly termed Donald Trump's policies "horrific." 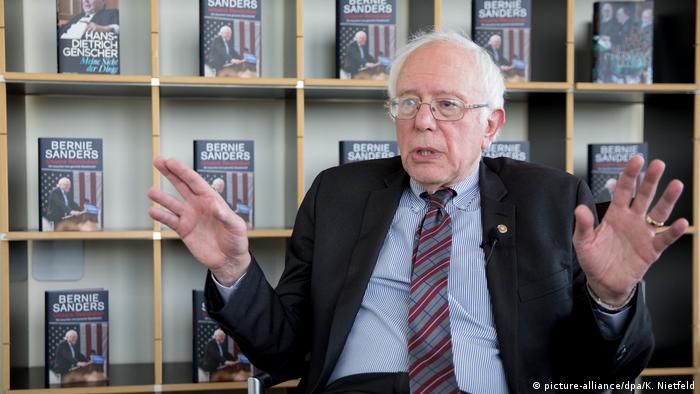 "Just follow all the young people." Those were the instructions I got when I asked for directions from the subway station to the main auditorium of the Free University of Berlin, where former Democratic presidential candidate Bernie Sanders was launching the German edition of his book "Our Revolution."

What were these young people expecting from a 75-year-old self-described socialist from one of the most obscure states in the US?

"I'm here because I thought the American election was really interesting, and Bernie Sanders was the only one who had radically interesting ideas," one young German told me.

"It is the same in France," a French woman on an exchange program said. "Bernie Sanders is very popular."

"I'm from Russia, and it's very interesting to hear an American who's a socialist - that's not so common," another member of the audience said.

Most of the people I talked to said that, to use the words of one German woman, "He's not part of the system." The applause the Vermont senator received upon entering the hall rivaled that of any campaign event in the lead-up last year's election. And if the audience was hoping for a scathing critique of Donald Trump, they got exactly what they wanted.

What the hell is going on?

Taking the podium, Sanders said he was going to talk about "What the hell is going on in the United States?"

Sanders said the relationship between the US and Europe had been essential in preventing conflict and ensuring the standard of living on both sides of the Atlantic. He said that "President Trump notwithstanding," this was the view of the "overwhelming majority" of the American people.

Read: What would Europe's 'fate' be without US military might?

He said it would be a "horrific mistake" for the US to withdraw from the Paris climate accords, again criticizing Trump.

"No matter what Trump believes or does, there is movement throughout America to take on the fossil fuel industry," Sanders said. "Do not think the people of the United States are turning their backs on this crisis." 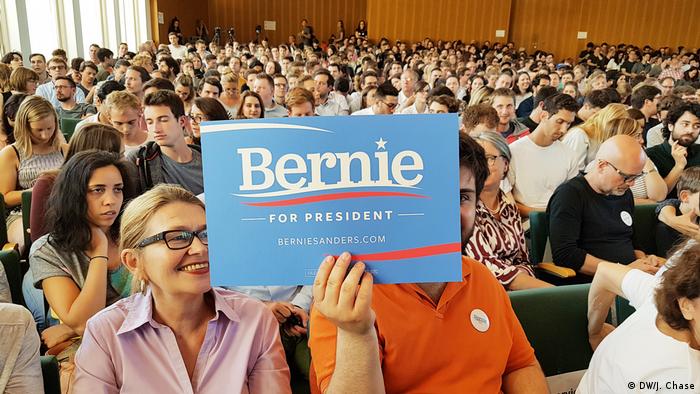 The youthful crowd gave the former candidate a rapturuous welcome

In perhaps the most anticipated part of the speech, Sanders took dead aim at Trump: "I am not a great fan," he said. His words drew laughs from the audience, who suspected what was coming next.

He started by excoriating Trump's proposed budget in the US, which Sanders said showed how "out of touch" the president was. Sanders called the budget the "most horrific" in modern US history. He said 23 million Americans would be out of health care, if Trump got his way, and thousands would "die needlessly." By contrast, Sanders said, the richest one percent of Americans would get $3 trillion (2.7 billion euro) in tax breaks.

The senator said he was "deeply disturbed" about Trump's "disrespect for democracy and traditional American values" such as freedom of the press. He decried Trump's attacks on journalistic institutions and his labeling of reputable American media outlets such as the New York Times and Washington Post as "fake news" as a "major assault on democracy in the United States."

Sanders said that Trump, in contrast to the many other conservatives the liberal senator deals with, "time after time tells blatant lies and makes outrageous claims that are not backed up by facts." He accused Trump of having supported Republican attempts to "suppress the vote" in many states.

Sanders said he was outraged by what he called Trump's attempts to divide people by race and religion. It was a scandal, he said, that the president "seemed to be more at ease with autocrats than leaders of democratic countries." Many Americans, for example, didn't understand Trump's coziness with Russian President Vladimir Putin or Philippine leader Rodrigo Duterte, Sanders added.

Read: Former FBI director Comey to testify that Trump pressured him to drop investigation into White House ties to Russia

He said that Trump had been elected because politicians in Washington had not listened to the "pain" of working-class Americans who have been left behind by the global economy. He lambasted corporations that made huge profits without paying taxes and said that there needed to be international efforts to combat the problem. 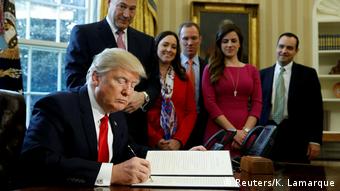 Sanders expressed his worry that the US was turning into "oligarchic form of society in which a small number of billionaires control our economy, as well as our political life."

"Our job is not to accept this," Sanders thundered, drawing loud applause. "It's simply not acceptable."

At a concluding Q&A session, Sanders was asked what he thought about German Chancellor Angela Merkel. The senator admitted to not knowing as much as he should about the German leader, but he added that, in comparison to Trump, "She looks pretty good."

That drew a final round of applause before the young crowd filed out of the auditorium and went their seperate ways. 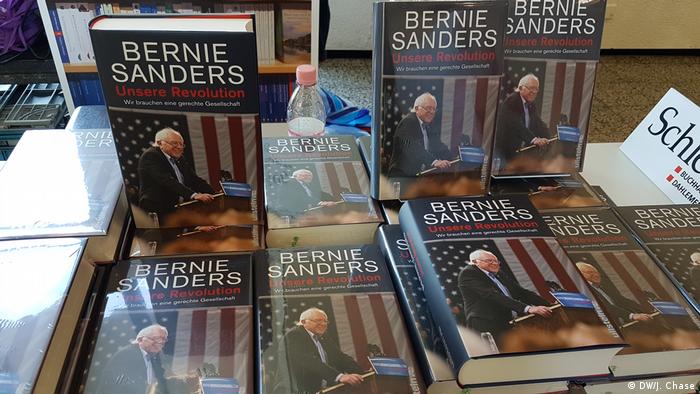 US President Trump and German Chancellor Merkel have never met. When they do for the first time they face the awkward task of having to overcome a barrage of unusually harsh criticism Trump levelled against his guest. (13.03.2017)

Politicians from across the American political spectrum have reacted strongly to Trump's sudden dismissal of FBI director Comey. The firing jeopardizes an investigation into Trump campaign ties to Russia, many said. (10.05.2017)