Germany's Moselle Valley is famous for its Rieslings, but Berlin? DW's Leah McDonnell explains why Berliners are toiling away to make a mean Riesling - even though they can't even sell it. 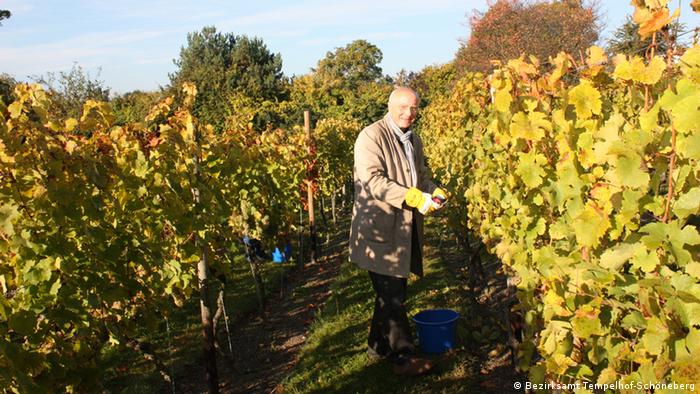 9:00 a.m. on a beautiful October morning in Berlin-Schöneberg. The pristine autumn sky shines as the sparkling dew underfoot seeps through my sneakers. Having just tumbled out of bed and biked here void of caffeine, I'm barely awake so the idyllic country setting of open, green space sprinkled with fruit trees, plots of bare, plowed earth, vegetable patches and a sloping space full of rows of grape vines, seems quite surreal - like a scene from a Fellini film.

Walking towards the vineyard, I wonder how it is that, minutes from Berlin's ultra-modern urban center, I find myself in a rural farm garden, seemingly untouched by the surrounding city.

Among the rows of grape vines, no-nonsense Berliners with garden clippers in their hands and buckets at their feet go about their work silently, harvesting grapes by hand. Thud! A cluster of the small, white Riesling grapes is dropped into the already full bucket at Michael Barthel's feet.

"It's a good harvest," he says as his hands feel about under the large grape leaves in search of another juicy bunch. Snip! He holds up the bunch, examining it critically. "The grapes are so plentiful and sweet this year, we don't have to press any but the best. The rest we can leave for the birds."

Looking quite at home in the vineyard, Barthel (pictured above) could be mistaken for a rural farmer from Germany's traditional wine region, the Moselle Valley. But actually, he's a native Berliner, and so are all of the other pickers in the vineyard this morning.

These days it's rare to meet a real Berliner in the capital; over the last years, Berlin has been flooded with a constant influx from across Germany and abroad of trendies, hipsters and posers.

The vineyard - of all places - is the first domain occupied solely by native Berliners I've yet to discover here. But then, it all starts to make sense. Newcomers to Berlin know nothing about this place, since it's not reported on in the local hipster publications. The vineyards they read about are the other ones in the city which are created by hipsters themselves.

The air is crisp as I wander through the rows, chatting with pickers willing to talk as long as they don't have to take their eyes off the vines. Every home-grown Berliner getting his hands dirty this morning used to be a local Schöneberg politician. And tending the grapes is their way of serving the community after leaving office. The vineyard exists in the first place because more than two decades ago a former district mayor planted the vineyard. The rest is history. 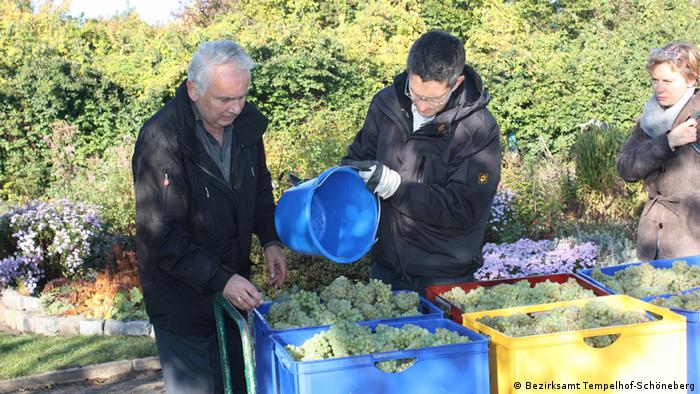 As Barthel and the others toil the Schöneberg soil, their actions are more than mere manual labor. For me, the way they care for the vineyard reflects the pride they had for their community when they were official representatives. A woman with flushed cheeks squints in the sunshine as she explains that she joined her former colleagues from the local city hall in the vineyard after serving as a district leader herself because she wanted to continue actively serving the community once she left office.

As a normal citizen without a political job, I'm an oddity in the vineyard, but not alone. One 20-something is happily snipping away, lost in his own thoughts. He says he's not a politician and has no interest in running for office in the future. He lives on the other side of town, but came all the way over to help out "because wine harvests are cool." Or maybe he's just relieved to have an excuse not to go to his university lecture today, I muse.

The rules and Robin Hood

Another unique visitor is the wine monitor. After all, we are in Germany, where everything - even amateur-made wine - is meticulously regulated. Looking like she's come straight out of the Beatles' "Lovely Rita Meter Maid" song, the official wine monitor tests the quality of the grapes, records how much is harvested, and chats for a few minutes before heading on her merry way again.

Since this area isn't an officially designated wine-growing region, a small amount of wine is permitted to be grown here - as long as it isn't sold commercially, according to German bureaucracy. And these law-abiding Schönebergers play by the rules.

It does seem a bit ludicrous to go through all the effort of maintaining a vineyard if you can't sell the fruits of your labor - or even drink them yourself. On average, the vineyard produces 700 bottles of Berlin Riesling. Since sale of the inventory is forbidden, the bottles are presented as gifts to visiting dignitaries as mementos of the German capital.

So why bother in the first place? Pride, of course. And that's something that doesn't come up too short among native Berliners. I wouldn't be surprised if the occasional bottle finds its way into one of the pickers' private wine cellars. But Robin Hood himself would surely approve of such an intoxicating detour.

In Berlin, my home is your home

Berlin is poor but sexy, people say. So poor, that many inhabitants sublet their flats to tourists in order to pay their monthly rent. And so sexy, that everyone is crazy about taking the offer. (12.10.2012)

German winemakers seek to win over the Chinese

Not many Chinese people think of wine when it comes to Germany's finer exports. They think of cars, machines and possibly beer. German vinters and the German Wine Institute hope to change this. (02.10.2012)

After-work drinks at the European Parliament

As the working day draws to a close, Place du Luxembourg - the square in front of the European Parliament in Brussels - fills with people. Among the crowd are lobbyists, on the hunt for networking opportunities. (28.09.2012)

After a series of alcohol poisonings, the Czech Republic had banned the sale of hard liquor. Now, Czech officials want the ban to be lifted. Neighboring Poland and Slovakia also imposed a ban on Czech-made-alcohol. (19.09.2012)

In southern France a Chinese couple has transformed an abandoned estate into a prolific vineyard. Their hard work is finally bearing fruit.

Stuttgart is distinguished by its vineyards and its automobile history, but there are also cultural treasures and culinary delights to discover. Lukas Stege cooks a Swabian national dish and visits the State Gallery.

From COVID to the Ukraine war: Berlin clubs reopen amid new concerns 04.03.2022

Clubs in Germany reopen after COVID restrictions brought them to a standstill for months. But the return of nightlife is overshadowed by the war in Ukraine. A look at the scene in Berlin.