Berlin to Spend Billion on Missile Defense | Germany | News and in-depth reporting from Berlin and beyond | DW | 21.10.2004

Germany reportedly plans to spend over €1 billion ($1.25 billion) on the development of a new transatlantic anti-aircraft system over the next eight years. 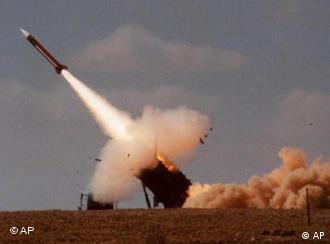 Germany's existing Patriot missiles system will be slowly fazed out

According to German press reports Thursday, Bundestag rapporteurs after years of research have finally approved what amounts to the largest current trans-Atlantic defense project.

At a time when Germany is tightening its defense spending and streamlining its military, parliamentary factions agreed to order between 12 and 24 of the MEADS units, under development for the last few years.

MEADS (Medium Extended Air Defense System) is a ground-launched missile system which can destroy aircraft and missiles within a range of up to 1,000 kilometers (621 miles). The newspaper also reported that further development is planned on IRIS-T missiles.

The program is being hailed as a symbol of trans-Atlantic cooperation, with Germany set to contribute some 25 percent of the project's costs, the US shouldering over 50 percent and Italy financing 17 percent.

In an interview with the daily Berliner Zeitung, Hans-Peter Bartels (SPD) revealed that Berlin has earmarked some €1.142 billion until 2012 for the MEADS system development, and said that contracts with EADS (Germany), Alenia Maraconi (Italy) and Lockheed Martin (US) are expected to be signed by the end of 2004.

According to Bartels, the first MEADS systems will be ready by 2012. The program, which will provide both defense for German airspace and can also be used abroad, will gradually replace Germany's existing Patriot radar guided anti-aircraft missile system.

The new ground-to-air system will also be able to destroy chemical, biological and atomic warheads. 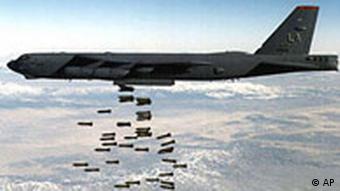 A US Air Force B-52 bomber releases its bomb load.

Although the MEADS program was first drawn up in 1987 against a background of Cold War hostilities, experts believe the new defense system is even more relevant in the face of the international terrorist threat.

Europeans May Aid US Firms with 'Star Wars'

German Defense Minister Struck has said Berlin will honor its commitment to purchase 180 Eurofighter aircraft, ending speculation Germany might renege on its order due to budgetary constraints.(March 30, 2004)

EADS and Lufthansa to Offer Defense Systems for Planes

Responding to the threat of terrorist attacks, the European Aeronautic Defense and Space Company (EADS) and German airline Lufthansa plan to offer a defense system for civil aircrafts.(December 15, 2003)